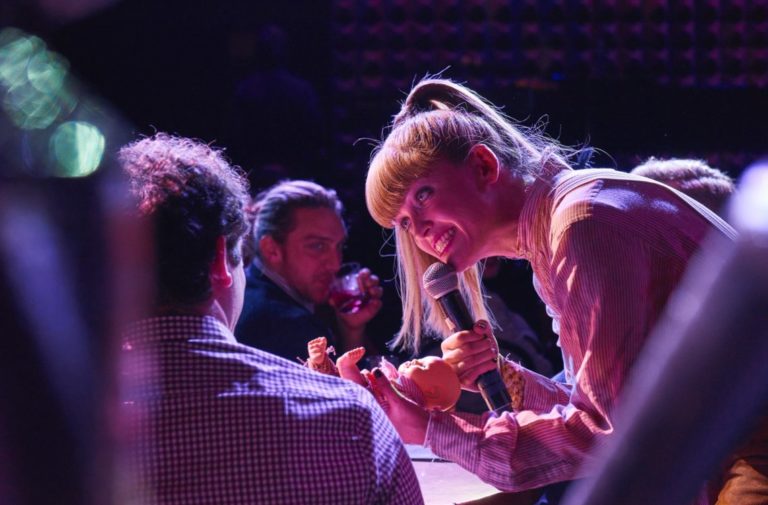 Nasty Women UK is an intersectional movement that aims to bring together people of all genders, races, faiths and LGBTQIA identities through the platform of the arts. This coming weekend they will be running an art exhibition and weekend of events that celebrate the diverse artistic achievements of creatives from across the UK in support of gender equality. The exhibition can be found at Stour Space at 7 Roach Road, Hackney Wick E3 2PA and is open from 6.30pm until late today, Friday 22 September, and from 9am until late tomorrow and Sunday.

This Saturday 23 September will be the final performance of Siân and Zoë’s Sugar Coma Fever Nightmare at the Aces & Eights in Tufnell Park in London. Their show will be at 9pm following anther alt-sketch group Sam and Tom. They say that they will immerse you in a series of darkly sweet sketches: a Scrabble board haunted by an inadequate demon, a pair of mariners fishing with dreamcatchers, a toddler’s trip to the abattoir, and why you should always put your gumshield under your pillow for the gum fairy. You can read our review of Siân Docksey’s Edinburgh show here.

At Trafalgar Studios in London is Alexi Kaye Campbell’s Apologia which passes the Bechdel Test and raises topical issues surrounding the second and current waves of feminism. The play centres on Kristin (Stockard Channing) an eminent art historian and 1960s political activist who has recently published a memoir causing tensions within the family which comes to a head at her birthday dinner. The production runs until 18 November. 2Faced Dance Company presents Outlands which will tour in autumn 2017. This brand new triple bill of contemporary dance showcases and celebrates some of the best up and coming female choreographers from India and the UK. Outlands features three world premiere works by choreographers Hemabharathy Palani and Ronita Mookerji from India and Emma Jayne Park from the UK. It can be seen at DEDA in Derby on 27 September, Kala Sangam Arts Centre in Bradford on 28 September, mac birmingham on 29 September, Salisbury Arts Centre on 30 September, The Place in London on 3 October, The Lowry in Salford on 4 October, Swindon Dance on 6 October and The Courtyard in Hereford on 10 October.

The Fierce Festival in Birmingham is committed to showcasing the best international live art across Birmingham city centre. This year’s festival will explore topics such as clubbing, mental health, fandom and queer culture through live art, theatre, dance, music, art installations, activism, digital practices and parties. The festival runs from 16 to 22 October 2017. Ahead of the festival Fierce will also be presenting Boner Killer by alt-cabaret star Erin Markey in a double bill with GETINTHEBACKOFTHEVAN’s Frankenshowat at The Yard in London from 3 to 14 October. They say: “Driven by Whitney Houston’s lesbian mythologies, Europe™, and a Pretty Woman accident, Markey sacrifices her own life to transform humiliations into feminist hope.”

The Secret Keeper by Angela Clerkin opens in October in London before going on tour. It’s a Gothic fairy-tale for adults with a political heart, about secrets, collusion, whistle-blowing and collective responsibility. It’s at Ovalhouse in London from 11 to 21 October followed by Milton Keynes, Coventry, Greenwich, Oxford, Plymouth, Leicester, Sheringham and Newbury up until 10 November.

And lastly, a group of female theatre-makers are in the middle of making a new piece of feminist theatre, Unsung, exploring the untold stories of four inspirational and pioneering women from UK history. Its development began in March 2017 at the Holbeck Underground Ballroom in Leeds and it will undergo further development this autumn at Square Chapel Centre for the Arts in Halifax before touring regionally in 2018. Check out their (subtitled) trailer here:

The feature image is of Erin Markey in Boner Killer. Markey leans in to an audience member with an intense expression on her face which could be a smile or a grimace; you can see a lot of her teeth. She holds a microphone up to her mouth with one hand and holds a baby doll with the other. Her hair is in a high ponytail.

Image two is of 2Faced Dance’s Outlands and is courtesy of Hemabharathy Palani. It shows a dancer lying on the floor with her back arched and twisted and her arms held aloft. Her face is turned upwards. She wears a delicate brown and green/yellow costume.

Image three is of The Secret Keeper. A woman wearing a old-fashioned dress with lace around the neck holds a dollhouse. She is lifting the roof of the dollhouse and looking in. Light is shining out of the dollhouse windows while smoke comes out of the chimney. A darkening sky and trees can be seen behind her.

The video is a trailer for Unsung. Vox pops with the actors are interspersed with footage from an early performance and post-show discussion shot in a theatre and outside.