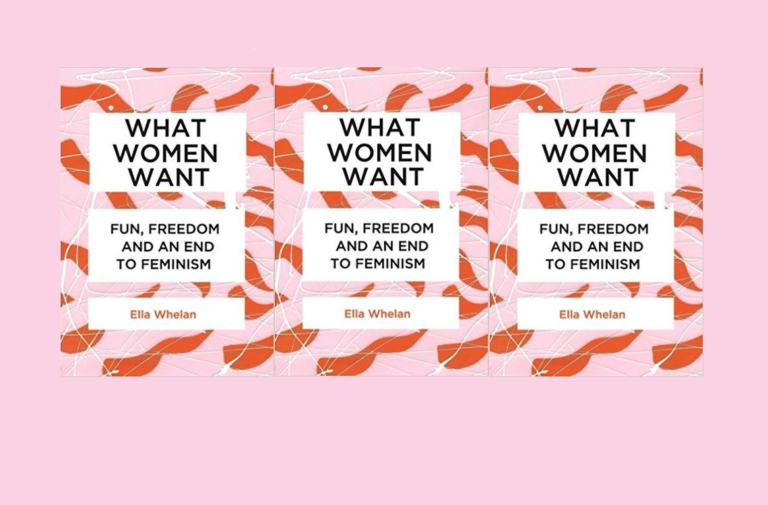 An end to feminism? Ella Whelan’s book What Women Want: Fun, Freedom and an End to Feminism, published last year, presents an assortment of essays detailing Whelan’s disapproval of contemporary feminism. I had the dubious pleasure of reading the short text with the hope of learning something about what Whelan believes is the future of women’s liberation. However, I predominantly found myself wincing at the poorly written and barely thought-out arguments and was left feeling the burning need to write a response to her provocative drivel.

The foreword of What Women Want, written by Brendan O’Neill, editor of Spiked magazine, instantly offers a variety of contentious issues. Right off the bat, O’Neill begins by discussing “the new feminism” without giving any kind of definition or insight into what this encompasses. At what point is he marking the change from ‘old’ to this ‘new’ variety? He goes on to give a vague history of feminism, but fails to mention the third wave or specific feminist activists in any capacity. Within the first few paragraphs of this foreword my main problem is believing that O’Neill knows anything about feminism at all.

O’Neill’s next sweeping statement is that, in this day and age, very few women actually refer to themselves as “feminists”, despite the fact that multiple sources, even those such as the Telegraph, have run articles claiming the opposite – that feminism is at an all-time high, having “conquered pop culture” in recent years.

My final issue with this foreword is the argument that What Women Want is not “anti-feminist”. However, O’Neill fails to acknowledge the title of the book, which includes the phrase “an end to feminism”, or even Whelan’s own words in the final chapter, stating that “feminism must end”. To me, that just doesn’t add up.

Once the foreword is finally over, the funniest part of Whelan’s official introduction is that it contradicts the information O’Neill has been spewing just pages earlier. Whelan begins by claiming that feminism is back on trend, it’s the latest fashion – she even provides quotes from the likes of Kristen Stewart and Oprah Winfrey discussing how popular feminism is in today’s society. What she doesn’t account for is the fact that O’Neill just told us that no one identifies as a feminist anymore, it’s become unpopular and the feminists are ruining their own reputation! Confusing to say the least.

Unfortunately, the main body of text doesn’t get much better. Whelan’s refusal to recognise catcalling as a legitimate concern is one of the first major points I struggle with. Sure, not everyone has the same opinion on comments from strangers in the street; many feminists, including myself, class it as sexual harassment, while others take it as a compliment. My issue with Whelan’s discussion is her complete trivialisation of the entire phenomenon. She uses the example of Nottinghamshire to claim that the recent criminalisation of misogynistic catcalling is unnecessary as, in her words, “Nottinghamshire has never been a dangerous place for women”. Firstly, this, to me, is a thoughtless and ridiculous statement to make. Any place has the potential to be dangerous for women, regardless of its size, population or reputation, if measures are not put into place to combat routine sexism like catcalling. It’s a particularly weak argument given that a 22-year-old woman was sexually assaulted in the streets of Nottingham as recently as a few months ago, as reported in the Nottingham Post.

Secondly, Whelan’s discussion of catcalling makes it clear that she believes passing comments aimed at women are no more than just that – passing comments. She argues that, if approached, women should simply “shout back”. What she doesn’t seem to grasp is the implications that are often attached to such remarks. Catcalling can be more than simply a matter of words, very easily posing a real risk and escalating into sexual assault. As for shouting back, this simplistic solution does not account for the sad reality that doing so has the potential to worsen an already unpleasant situation. According to Hollaback!, 71% of people worldwide have been followed in the street, and, according to Stop Street Harassment, 64% of women in the UK have experienced unwanted sexual advances in public places. Statistics like these make Whelan’s argument that catcalling does not pose any kind of threat significantly less compelling.

Whelan’s next corker is her assertion that women’s issues, for example periods and shaving, are blown entirely out of proportion by feminists

Whelan’s next corker is her assertion that women’s issues, for example periods and shaving, are blown out of proportion by feminists. At this point in the book, her viewpoint comes as no surprise. She discounts the whole narrative of female body shaming, blaming feminists for being overly sensitive about how they look – instead telling them to ignore advertisements and shrug off the pressure to be slim. She goes as far as saying that worrying about weight is inevitable for teenage girls, and that they will grow out of it by the time they leave school. The blasé tone this is written in is painful to read. It’s almost as if she is completely ignorant about the common consequences of the media presenting the idealised body as desirable and ‘normal’. It’s not surprising to find out that, as stated by Mirror Mirror, 70 million people worldwide suffer from eating disorders: hardly something to shrug off as normal teenage anxiety when the monumental impact on mental and physical health in is undeniable.

The chapter on feminism and sex may be the most debatable of them all. As soon as I read the subheading ‘The Myth of Rape Culture’ I felt painfully deflated. Whelan seems taken aback by the very idea of publicising instances of sexual abuse, stating that “there are actual Twitter campaigns which encourage women to indulge in every negative incident they face by tweeting about it” – what a concept! She argues that discussing sexual abuse is part of feminism’s problem, whereby women present themselves as victims and exaggerate the sexism they face in order to elicit sympathy. What Whelan does not consider is that sharing experiences of abuse has the potential to deter future attackers, legitimise and comfort other victims, increase awareness of the issue and create a much-needed conversation about how to reduce sexual crimes against women. These notions appear utterly incomprehensible to Whelan who seems to paint women who discuss their experiences of sexual abuse and harassment as attention-seeking liars.

Whelan’s complete inability to understand the significance of rape culture is agonising. According to her logic, “calling a guy at the bar who has danced a little too close ‘rapey’ is a misunderstanding of the serious nature of rape”. While her point has an ounce of logic to it – yes, the term “rape” should not be used lightly and some potentially innocent dancing does not belong in the same realm as the actual act of rape. However, it is as if she cannot see that predatory actions, such as dancing with your body pressed against a woman, groping and touching her with no regard for consent, should not be written off as an overreaction. This is the type of behaviour that has the ability to make a woman feel unsafe and become wary of the threat of sexual assault in the first place, meaning that the kind of “dancing” Whelan references can surely be related to rape culture in some way.

Overall, I find What Women Want to be a highly controversial and problematic text in numerous places. The use of a manipulative rhetorical style in order to strengthen arguments infuriates me throughout, such as when the author keeps referring to women as “ladies” in specific instances to make them seem weak when it suits the point being made. Whelan’s arguments are calculated, including selective use of statistics to support her points without commenting on the abundance of evidence stacked against her. Despite all of that, I would still recommend reading What Women Want, as I did, in order to experience an opposing viewpoint and gain some insight into the arguments held by anti-feminist authors. If nothing else, you’ll almost definitely improve your annotation skills as you scribble all over it, tearing every argument to shreds.

The picture used is the cover image. It’s a simple cover with a pink, white and orange pattern. This is overlaid with white text boxes, containing the title (which is What Women Want), the sub-title (which is Fun, Freedom and an End to Feminism) and the author’s name (which is Ella Whelan).