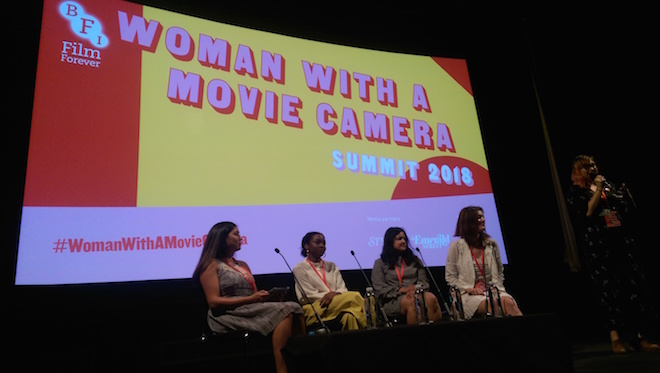 From hashtags to headlines: Woman with a Movie Camera summit

Emily Zinkin reports from British Film Institute’s first-ever summit for professional women in film, who dissected #timesup, performative wokeness, diversity in criticism and the death of the “strong female character” among other things

When I saw the lineup for the BFI’S Women With a Movie Camera summit, it was immediately obvious that I would have a problem picking which events to see in the packed schedule. It was a great problem to have. Later, I was shocked to find out it was the first event of this kind they had organised. Everything from the talks to the zine library and temporary tattoo parlour was fantastic, and I wasn’t the only one to think so. Despite going on my own, I spent the day chatting to other people about panels we’d listened to, catching each other up on the ones we hadn’t seen and discussing the issues being debated. I still wish I’d had a time-turner so I could have gone to everything, but it was great to hear so many people get impassioned about what they’d just heard and be able to share the experience.

The ‘Before and After Time’s Up’ panel featured a range of women from across the film industry: Holly Tarquini, director of The F-Rating, screenwriter and critic Kate Muir, film producer Mia Bays and Ellen Jones, campaigner and content creator. This gave a good breadth of insight into the movement that has jumped from hashtags to headlines. They talked about how #MeToo isn’t actually a new movement but has been going on for five to ten years, and how the fact that the Weinstein case happened in such a highly visible area of the industry elevated it in the media. Because social media allows for all voices to be heard and for news to travel quickly, that moment turned into a movement.The panel members agreed that it was going to take a long time to fix the situation and reminded everyone that it is easy to get overwhelmed when looking at all the issues we face globally. The message is: it’s important to understand that you as an individual can only do so much, but it is even more important to do what you can to lift up other women and to ask for help and mentorship if you need it.

The next talk I went to was ‘RIP #strongfemalecharacter’ by Channel 4’s commissioner and producer Catherine Bray who discussed the stereotypes associated with this now somewhat tired trope. Rule number one: be violent (but still a bit sexy). If you want to spot this character, look out for high heels and other stylish costume elements unsuitable for espionage, and dodgy wire work that makes them look like they can fly despite not having superpowers. Rule number two: be sexy (but also a bit violent). Tip-offs include fighting in bras, fishnet tights and/or stockings, often when drinking, and laughing when firing a gun. Rule number three: be Angelina Jolie. Bray made a very good point that many of us are attracted to these characters because of their strength, sexiness, and complete lack of emotional vulnerability, which many of us have occasionally fantasised about. But while it is absolutely fine to love something that’s problematic, you need to acknowledge it, like Kate Beaton does in her amazing comics. These characters are normally stereotypes while what we need is more complex female characters, messy ones who are allowed the full range of the human experience, ones that are unpredictable and experience a broad spectrum of emotions.

Examining media critically is crucial, yet it is sometimes difficult to criticise pop culture heroes because of a “with us or against us” mentality that surrounds them

In ‘Pynk As We All Go Insane’, curator Jemma Desai (founder of I am Dora) discussed how we look to the entertainment industry for cultural and political heroes, and why that is problematic. With concepts like “intersectionality” and “cultural appropriation” having entered the mainstream, we now expect our entertainers to be “woke”. But wokeness cannot truly exist with celebrity as celebrity is a form of performance, and so any wokeness in that sphere is necessarily performative.

That is not to say that pop culture shouldn’t engage with politics or current affairs. It is often very moving and a good platform to draw attention to things, and Jemma even described consuming Beyoncé’s Lemonade as feeling like becoming part of a movement. Examining media critically is crucial, yet it is sometimes difficult to criticise pop culture heroes because of a “with us or against us” mentality that surrounds them. She described how it is important to not mistake consuming media for a political act but rather use it as inspiration to go out and engage in political acts. Lemonade is much easier and more enjoyable to watch than Kimberlè Crenshaw’s TED talk on Say Her Name, the movement to bring awareness to police brutality and murder of black women, but we need to watch both. ‘A Critical Perspective’, a panel hosted by Rhianna Dhillon and featuring film critics Simran Hans, Sophie Monks Kaufman and Kelli Weston, was particularly well-timed, with a recent study from the University of Southern California showing that fewer than a quarter of the top critics are white women and women of colour make up a mere 2.5% of top reviewers.

The panellists discussed how the language of cinema is overwhelmingly white and masculine, which means films that don’t fit that viewpoint rarely enjoy the same prestige as those that do, and it is up to critics to amplify diverse voices. They also touched on the difficulty of being sent to films by editors in a tokenistic way, as well as the expectation to be positive about a film because it’s ‘important’, ignoring that their job is to be critical and not part of PR machine. The role of a critic is to ask: “What is this film doing and is it doing it well?” while always keeping in mind another question: “How am I responding to it?” Demanding objectivity for the sake of journalism ignores the fact that reviewing is subjective, and we need diverse critics to allow for different responses.

Finally, I was lucky enough to get a ticket to a live recording of The Guilty Feminist podcast which the host Deborah Frances-White is now doing regularly with the BFI. The topic was “Dangerous women in film” and why these rare characters are so delightful. One of the reasons is that we hold women to different standards of likability than men: being terrible to another character is a sign of inner turmoil and flaws in a male character while rendering a female character completely reprehensible. Female characters, as Deborah pointed out, are often the fun police, telling men not to do things which, if they didn’t, would ruin the plot. We also got an exclusive screening of her guests Nat Luurtsema and Yasmine Akram’s new short film War Paint, where an enigmatic narcissist befriends a despondent loner from Book Club and drags her on a gruesome misadventure. I highly recommend the short and hope it gets developed into the full feature film.

Apologies if I’ve made you wish you were there… I wish I was still there, and I’m already looking forward to next year’s summit. I hope we will see more of these types of events: these conversations are too important to only be had on an annual basis.

All pictures taken by Emily Zinkin on the day. Images description:

1. A wall of feminist zines, hung on a white wooden grid. The zines are black-and-white and in colour and the titles I can make out are “gal-dem”, “fun city”, “nerve”.
2. A picture projected on a screen in a dark room, with a white woman (Catherine Bray) standing next to it at a lectern, looking at her laptop. Picture on the screen shows a white woman with black fringe (Angelina Jolie) wielding a gun, with the lettering “hello i am a strong female character, you can tell by the gun that i have”.
3. Four women (three women of colour: Simran Hans, Kelli Weston, Rhianna Dhillon and one white woman, Sophie Monks Kaufman) are sitting on the chairs on stage, with another white woman (Anna Bogutskaya) standing next to them introducing the panel. There’s a “Woman with a Movie Camera Summit 2018” logo on the big screen behind them.

Emily Zinkin is The F-Word's comics editor. She really loves things that pass the Bechdel test, over-analysing all forms of media and complex portrayals of women and female friendship