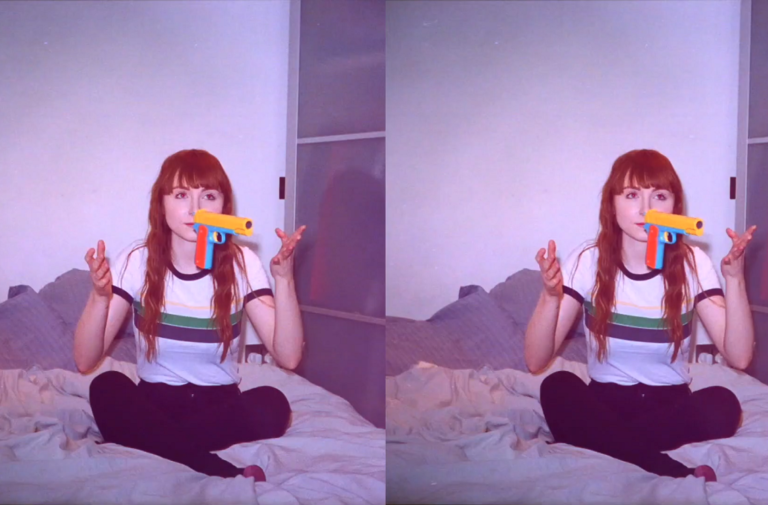 To begin with, the Calm Down, Dear festival is back at Camden People’s Theatre, opening on Monday and running until 16 June. It all looks great and these shows caught my eye in particular: There are a couple of interesting-looking shows coming up at Blue Elephant Theatre in south London. From 29 until 31 May is a double-bill of Baby Plus Two and Legs which explore motherhood and women’s bodies. There is a baby-friendly performance and workshop of Baby Plus Two on 30 May. On 8 June is Rebirth of Meadow Raine which is a darkly comic tale, exploring themes of emotional abuse.

Exploring the dangerous things we do to feel safe, Armadillo running from 30 May until 22 June at the Yard Theatre in London looks at the impact of a kidnap on a young woman and her obsession with guns.

To mark the 30th anniversary of the brutal crackdown of the democracy movement in China, on 1 June the Omnibus theatre in Clapham with Papergang Theatre has 30 三十, a five-hour durational arts event of political theatre presenting narratives that are often overlooked in the UK.

Kill Climate Deniers runs from 4 until 28 June at the Pleasance Theatre in London. It blends fact and fiction, exploring in parallel a hostage situation as it teeters on the brink of calamity and what happened when writer David Finnigan first tried to stage the play. The cast includes Kelly Paterniti, Bec Hill, Hannah Ellis Ryan and Felicity Ward.

New play Who I Could’ve Been by Tori Allen-Martin, an exploration of love and loss and all the versions of ourselves we met and became along the way, is at The Space in east London from the 4 until 8 June.

The Sweet Science of Bruising opens at Wilton’s Music Hall on 5 June and runs until the 29. Based on true events and set deep in the heart of Victorian London, four very different women are drawn into the dark underground world of women’s boxing; each finds an unexpected freedom in the ring. I saw this show at the Southwark Playhouse and Wilton’s Music Hall is a great venue for it!

Wesele/ Wedding, an immersive one-woman comedy cabaret about the last Polish-English wedding before the borders close, is at Rich Mix in London on 7 June, Blackfriars Theatre, Boston on 6 July and Bedford Fringe on 19 and 20 July.

Apphia Campbell’s Woke, running from 10 until 27 June at Battersea Arts Centre, is a new story about the 20th century African American experience. Against a soundtrack of original music and traditional gospel and blues, two women, 42 years apart, become involved in the struggle for civil rights. All performances of Woke are relaxed, which at BAC means there is a relaxed attitude to noise and movement in the auditorium, a designated ‘chill-out space’ is provided for guests who may need time away from the performance and ear defenders are available for those with sensory sensitivities.

Sarah Wanendeya’s short play, Becoming the Invisible Woman, is at the Drayton Arms in London from 11 until 15 June as part of a double bill with Everything Today Is The Same. The play explores experiences of ageing, motherhood and the pursuit of unfulfilled dreams.

New theatre company Part of the Night, dedicated to bringing theatre for women to nightlife venues, launches on 17 June with Theatre On Tap. Three teams of women and non-binary writers, directors and performers will take up a 24 hour challenge to create three new short pieces of theatre. These will be shown in the Old Red Lion pub in London (in the main space rather than in the theatre space above).

Kiss My Scratch is a work-in-progress evening of ambitious alternative performance work with a mostly women-identifying lineup at the Pleasance Theatre in north London on 24 June. It’s hosted by Elf Lyons and features Lucy McCormick, Alissa Cooper, Kerensa Diball and Katie Paterson among others.

A tender, graphic exploration into sex, pleasure and taboo, Anthony Neilson’s The Censor is at the Hope Theatre in London from 25 June until 13 July. The Underbelly Festival Southbank is well underway and is a lot of fun as always. Coming up is YUMMY, “a powerhouse cabaret of drag, dance, circus and live music [with] a unique sense of gender balance and fluidity that reflects a changing cultural attitude towards gender identity.” YUMMY runs from 27 June until 28 July.

Following her solo show WHITE (which I interviewed her about here), Koko Brown brings GREY, the second instalment of her Colour Trilogy, to Ovalhouse in London from 27 June until 13 July. This autobiographical new show explores depression and challenges the taboos which so often obscure black women’s mental health.

This year’s Shubbak festival of contemporary Arab culture takes place in London from 28 June until 14 July. There’s a lot happening across music, film and visual arts and theatre performances include No one likes an ugly revolutionary and This is not a memorized script, this is a well-rehearsed story both at the Gate Theatre on 4 July.

BLUE is an abstract one-woman show about a woman who lives on the Moon. Including poetry, puppetry, clowning and a lobster called Spock, BLUE explores living with anxiety and depression and the importance of reaching out when you’re not O.K. It’s at the Offbeat Festival in Oxford on 22 June and at the Lion and Unicorn Theatre in Kentish Town from 30 June until 1 July.

And finally, Rebel Voices: Monologues for Women by Women, an anthology of 40 monologues from 40 years of Clean Break has just been published. The book offers performers a diverse set of monologues reflecting a range of characters in age, ethnicity and lived experience, with material drawn from a mix of published and unpublished works.

The feature image is from Armadillo. It shows a repeated photograph of a young woman with long hair and a stripy t-shirt sitting cross-legged on a bed. In front of her face is a plastic water-pistol which in the moment the photograph is taken is in mid-air.

The first image in the text is a publicity image for Kill Climate Deniers with photography by Rianna Dearden and design by Adriana Rojas. It shows a woman with curly hair standing with her hands on her hips looking to her left. She has red stripes on her cheeks (they look as if they have been added on afterwards rather than being part of the original photograph) and there is some kind of indistinct garland around her neck. The background behind her is half orange, half blue.

The second image in the text is from the RADA Festival and is by Sarah Hickson. It shows three people in a backstage area of a theatre. They are all to the left of the photograph and are holding scripts in their hands while looking at the camera. Behind them are racks of costumes, drawers, plastic boxes and heaps of theatre wardrobe paraphernalia.