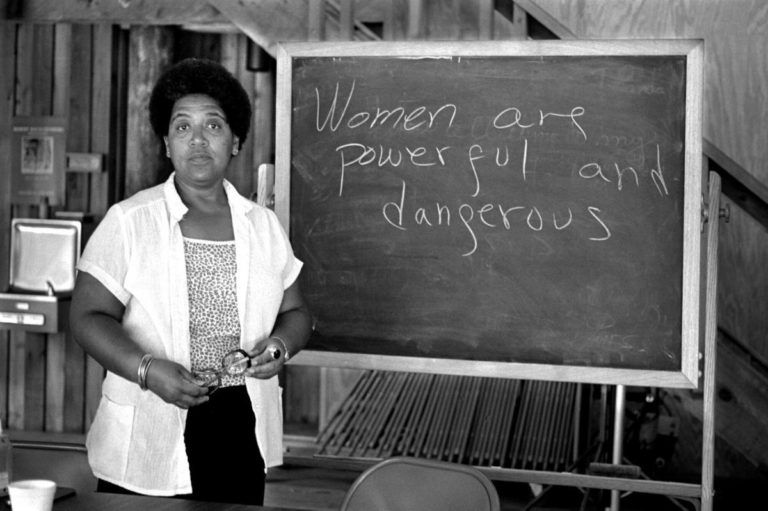 Shapes that move: Sheffield Doc/Fest digs through the archives of British feminist collectives

This year, the UK’s biggest documentary film festival Sheffield Doc/Fest presented the Focus/Shapes That Move strand, an extensive programme looking at the history of intersectional feminism through the work of British film collectives dating back to the 1970s. The teams behind these shorts, in the festival programmers’ words, “turned the act of filmmaking into an act of solidarity”.

The programme is made up of six compilation screenings and a talk by the filmmakers and archivists that helps put the films in perspective, with Terry Wragg from Leeds Animation Workshop, Rehana Zaman of Liverpool Black Women Filmmakers, Chrissie Stanfield of Sheffield Film Co-op and filmmaker Campbell X who recently established the QTIPOC Family & Wahala Film Fund. During the talk, Terry Wragg accurately describes the intention and feeling behind the retrospective: “We are so used to thinking things aren’t getting any better for women, for people of colour, for queer people… But trust me when I say there were things that were actually worse in the ‘70s. Us lot have been here making films before you.” The programme communicates exactly that: the battle for rights goes way back, ‘woke entertainment’ wasn’t magically created a couple of years ago and ‘70s filmmakers were a lot more sassy and brutal than one might expect, given the restricted circumstances in which they were working.

Campbell X goes into detail about the difficulty of retrieving Black people’s histories, as their archives are often in the hands of white institutions such as the British Museum and require considerable fees to be accessed. “Absurdly enough,” Campbell X retorts, “our images and memories are not owned by us. People who have been colonised have had their archives stolen.” When talking about the decision to create their own film funding programme, Campbell X explains that: “institutional funding is a poisonous channel: sometimes we’re flavour of the month, sometimes we’re not. With Wahala we’re in control.”

Audre Lorde comes across almost as a messiah: a strong and smart woman unwilling to compromise on her complexity and putting forward the ideas that now sustain what we call intersectional feminism

The opening screening of the strand is called ‘Flip the Script’ and features a series of short films aimed at turning heteronormative gender tropes on their head. The first film, The Mark of Lilith directed by P Gladwin, I Mack-Nataf and Bruna Fionda in 1986, is a meta vampire movie focusing on the treatment of women in the horror genre and society’s demonisation of lesbian women and women of colour. It is a great choice to open the programme, as the level of insight and parody is so contemporary it almost makes the audience question if this could be a modern film made to look vintage. This screening also includes Campbell X’s recent short VISIBLE which explores the importance of extending the Black POV to other heritages outside of African-American, such as Caribbean or Ethiopian, and to re-appropriate Black people’s stories and their experience of queerness. The audience are next introduced to one of the many works produced by Leeds Animation Workshop, Out to the Family: a cartoon dealing with children from different backgrounds coming out to their families, showing the importance of family members working through their prejudice – all six mini-stories have happy, reconciliatory endings.

Vera Productions’s Video 28 shows countless protests across Britain against Section 28 of the Local Government Act in 1988 which stated local authorities such as schools “shall not intentionally promote homosexuality or publish material with the intention of promoting homosexuality”. The sheer number of lesbian women shown in the protests is once again a comforting reminder that queer history is so much larger than we are often taught and that there are plenty of people who never confined themselves to the shadows, even during the times of discrimination. All these films talk about stories that are contemporary, unfiltered and empowering. There’s no room for tragedy or victimisation.

The following compilation screening is ‘Praise the Lorde’, a series of inspirational shorts dedicated to Audre Lorde. The first film works as an introduction to the subject: made by the Black Women’s Media Project and WITCH, A Tribute to Black Women (They Don’t Get a Chance) shows a series of interviews with people in Liverpool. “Are you taught about any black women in school?” the journalist asks again and again; “Can you name any famous black women who aren’t either sportswomen or entertainers?” The reply is often a vacant stare, which goes to prove the point. People’s bafflement is funny, but also sad. The film then cuts to Black women and researchers talking in-depth about many of the famous Black women the official historiography often overlooks: Cleopatra, Harriet Tubman, Angela Davis, Mary Seacole, Maya Angelou and many others. Why don’t we learn about them? Why is Mary Seacole erased from history in favour of Florence Nightingale, despite the experience they share? Isn’t there space for both?

The other two shorts look directly at Audre Lorde’s contribution to Black LGBT history. In cutting between factual extracts from her interviews and fictional re-enactments of her love affairs, Lorde comes across almost as a messiah: a strong and smart woman unwilling to compromise on her complexity and putting forward the ideas that now sustain what we call intersectional feminism. The compilation ‘A British State of Being’ questions in turn national identity and Britain’s history of colonialism. Here Leeds Animation Workshop steals the scene with Crops and Robbers. It’s an irreverent and thought-provoking cartoon about the connections between colonialism, famine and capitalism, represented through different states playing a game of monopoly, planting their flags everywhere, as well as giant strawberries chilling in the sun and drinking pesticides before boarding a plane to the US.

The interview format is reprised in Being White, where several white people are questioned about their privilege and their awareness of it. The film explores how being white allows individuals to feel comfortable and have person-to-person variety, but it also doesn’t shy away from exploring the shared traumas and complexities of individuals who are white but are still part of underprivileged minorities such as Jewish, Irish or working class. The compilation also includes a more recent work that emerged from a collaboration of Rehana Zaman with Liverpool Black Women Filmmakers group: How Does an Invisible Boy Disappear (2018) follows a group of teenage girls from Somali and Pakistani backgrounds as they attempt to find out more about a local missing boy but are met with a lack of interest and carelessness from both society and the police force. The compilation ‘Another Mother’ offers a melancholic look at the layered complexities of being a mother, a woman and a person in society, visually expressed in From A to D by the gloomy and lonely cinematography or discussed at length in Bred and Born, which follows four generations of East London women. The screening ‘Operate Heavy Machinery’ pays an overdue homage to the women of the north working in factories, both during World War II and later on, while the final compilation in the series, ‘Films for Rebel Girls: Dream Screens’, connects us back to the present. The short films presented are curated by Pavilion’s Rebel Art School for Girls, an ongoing arts project fostering confidence, creativity and collaboration among young women in Leeds.

Shapes that Move succeeds in portraying the importance of film collectives and archives, which will hopefully inspire audiences to pay more attention not just to the films, but to the stories around these films being made. It is refreshing to see just how much tone and perspective shift when it’s minorities or other under-represented groups making films about themselves. They don’t need to be sanitised, they don’t need to be mainstream or appeal to general audiences. These films know who and what they are for and they are not ashamed to be upfront about it.

As an LGBT woman filmmaker, seeing them helped me to feel part of a wide and varied community that stretches far beyond my expectations. As with many others, every day I feel responsibility for pushing media to become more inclusive. But while Hollywood takes one baby step at a time, we should make the effort to learn about the independent filmmakers and companies who have been practising this for years, excellently, though in the shadows. We should strive to ensure these films are seen and are available to inspire others. It took the curators countless hours to dig these films up from long-forgotten archives: they are the giants, and we, the new generation, now stand on their shoulders, trying to look even further. It is an honour to see just how much they paved the way.

Sheffield Doc/Fest took place between 6 and 11 June 2019.
All images courtesy of Sheffield Doc/Fest.
Image descriptions:
1. A Black woman with short hair, holding a pair of glasses in her hands, is standing next to a blackboard with the following words chalked: “Women are powerful and dangerous.” It’s Audre Lorde.
2. A woman is sitting on the bench, with another woman resting her head on her lap and lying on the bench on her back. There’s a black and white image of another woman projected on the wall behind them. It’s a still from The Mark of Lilith.
3. A black hand passes the basket of fruit to greedy white hands. Animation still from Leeds Animation Workshop’s film Crops and Robbers.
4. The image is divided in two with a black and white picture of a mother holding her baby on the street on the left and on the right, a sepia-coloured picture showing two women walking on the street from the back. A postcard for FOUR CORNERS’ Bred and Born.