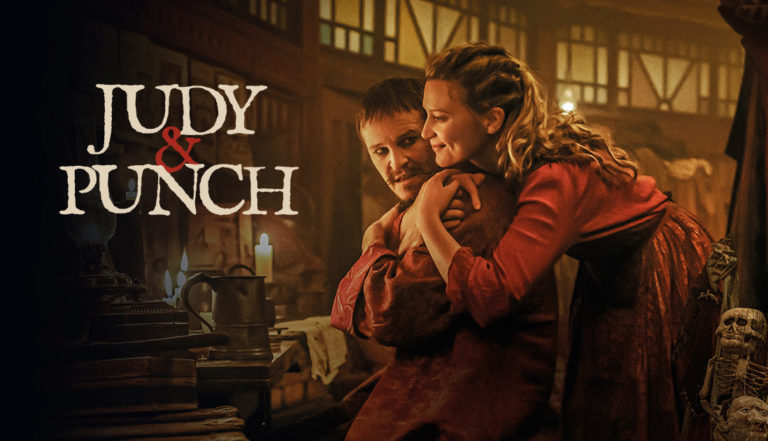 I’ll come clean. I am a die-hard fan of fairy tales and myth, even more so when their archetypes are revisited as a frame to talk about our current society.

Mirrah Foulkes does exactly that in the live action retelling of puppet show Punch & Judy, pointedly retitled Judy & Punch, to underline the shift in perspective.

Written and directed by hers truly, the film is set in a very upbeat version of England in the 16th century and explores the story of puppeteer duo Judy (Mia Wasikowska) and Punch (Damon Herriman), who are eager to get out of their boring town of Seaside to perform on the greatest stages. But despite Judy being the one to literally ‘pull the strings’ of the show, Punch gets all the glory. He is adored within the small town community and masterfully hides the nastier side of himself; that of a narcissistic alcoholic. Judy is worried Punch’s drinking habits will get in the way of the show’s success, but she doesn’t imagine how very little he cares about the family they’ve built. Seaside is also a town of superstition, with people regularly being stoned for witchcraft due to ridiculous crimes such as “staring at the moon for too long”. The juxtaposition between the violence of the stoning and the chippy comedic tone gives a taste of what’s in store for us.

After Punch inadvertently throws their infant baby out the window during a drunken episode (which is absurdly the funniest scene in the film), Judy confronts him in anger. Punch beats her almost to death and buries her in the woods, where she is found by a coven of real witches hiding in the forest.

While the witches bring Judy back to life, Punch uses his charms to convince the community that the murders have been committed by the family’s butlers, a couple of adorable 90 year olds with dementia.

It’s particularly relevant to see people’s eagerness to find a scapegoat to unload their frustrations onto, whether that’s witches or, you know, migrants, LGBT people and anyone that stands out just a tad too much

Judy needs to reassess her preconceptions about witches but, most importantly, her feelings for Punch. Will she stay and get revenge or will she leave with the coven, starting a new life within a loving community?

The answer is not so cut and dried and most importantly Foulkes has fun playing with the concept of revenge. Judy’s first attempt to scare off Punch is nothing short of ridiculous – yet effective – and distances the film from the woman scorned trope or the even more banal rape and revenge by having Judy come up with extremely ingenious and non-violent ways to get back at Punch.

Though Punch doesn’t walk out in one piece, how we get there is surprisingly inspirational and not too bloody.

What the film addresses in quite a masterful way is Punch’s ability to play the audience and raise his status by simply being a crowd-pleasing charming fool. The parallels to current day politicians and their rhetoric aren’t subtle – but they don’t try to be. It’s particularly relevant to see people’s eagerness to find a scapegoat to unload their frustrations onto, whether that’s witches or, you know, migrants, LGBT people and anyone that stands out just a tad too much.

For a movie that so brilliantly examines the relationships between convention, inclusivity and fame, wouldn’t it only be right that the casting reflected the diversity so efficiently praised in the narrative?

This is where the movie could have pushed its luck slightly further and made an even stronger case. The casting is overwhelmingly white and, though the coven is mostly made up of women, which subtextually raises a question around their sexuality, these issues are never tackled head on. For a movie that so brilliantly examines the relationships between convention, inclusivity and fame, wouldn’t it only be right that the casting reflected the diversity so efficiently praised in the narrative?

The fairy tale framing is what allows us to not take the film too seriously or dwell too long on whether we should laugh about a baby falling out of a window. We just go along for the ride. The power with a narrative like this is its ability to reach out to multiple generations. The film’s 15+ rating is perhaps just slightly too severe, as the violence in the film is always lightened by humour (except for Judy’s beating). In comparison Pan’s Labyrinth, where violence is much more frequent and grounded in history, shares the same rating, while more similar adult fantasy movies such as Stardust have received a PG rating. I believe the film could easily be accessed by teenagers and hopefully offer an alternative take on stories about female revenge in a time where formative figures are extremely important. Mia Wasikowska’s portrayal of Judy is unique as well. She brings the character to life through sarcasm and wits rather than tragedy. From the opening scene she holds herself together with a regality and precision that immediately places her above Punch, who on the contrary is characterised by a constant drunken euphoria. The trauma of the loss of Judy’s child is explored through lingering gazes and an affinity towards the children in the coven, but it doesn’t hold her character back. She remains a profoundly smart woman with a devotion for family, whether that’s formed by blood or kinship. She is able to start a new, positively-framed life after Punch is out of the narrative. That alone is something rarely depicted in cinema.

As with all fairy tales, this one comes with a moral about the importance of accepting our differences rather than live in the fear of standing out. It is a bit on the nose and one can only wish the casting director had taken the message more on board but, overall, it’s one of those rare niche gems that genre-bending lovers like me will clap along to.

Judy & Punch is out in cinemas now

All images courtesy of Organic Publicity
Image description:
1. Film poster with title on the left. On the right, Punch sits on a chair with Judy leaning over his shoulder and smiling affectionately. They are backstage, with candles lighting up the room. They wear period clothing.
2. On stage, Judy introduces Punch as he comes out from the red curtains.
3. Judy rides a black horse with a determined face. She is in an open space, wearing a blue and grey cloak. The colour palette in the scene is distinctively colder than in previous images.