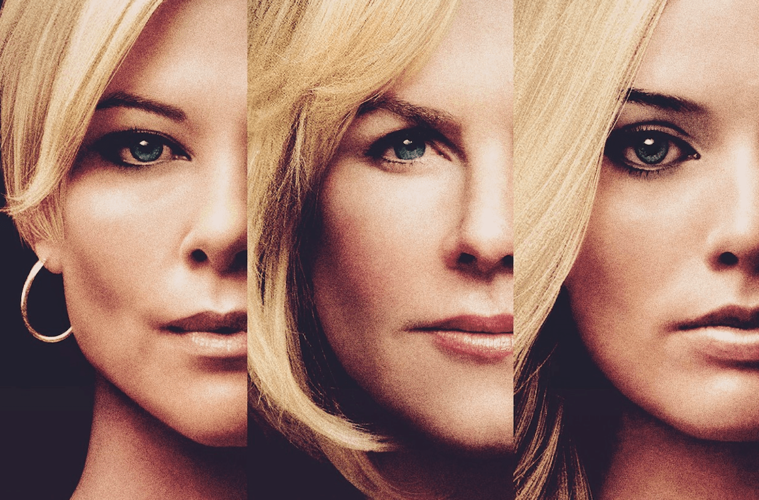 CN: descriptions of sexual abuse and spoilers for the film

Jay Roach’s Bombshell, a dramatisation of real-life events at Fox News in 2015 and 2016, sees three powerhouses of cinema – Charlize Theron, Nicole Kidman and Margot Robbie – playing women who face sexism and sexual harassment in a brutal, uncomfortable and truthful piece of cinema. If you are familiar with Fox News, then you will be familiar with its controversial and offensive nature. Presenter Megyn Kelly is known for her questionable stances such as defending the use of blackface. It’s not immediately clear how the audience are going to be able to empathise with Kelly (played here by Charlize Theron) and those around her in this fictionalised version of their lives. Roach’s direction addresses the issue by introducing more sympathetic fictional characters such as TV producer Kayla Pospisil (Margot Robbie) alongside those who we might recognise. This allows the audience to root for people who would otherwise be the villain, differentiating Fox News CEO Roger Ailes (John Lithgow) as a loathsome, slimy character who would give anyone the jitters.

This internal conflict about Kelly is triggered right from the opening scene where Kelly clashes with Donald Trump. As you might remember, during the 2015 United States election campaign, Kelly was a co-moderator for a Republican presidential debate, in which she confronted the then-presidential candidate about his derogatory comments towards women. At the time, Trump responded with a series of still visible tweets in which he dismissed her implying she was on her period.

The backlash that Kelly undergoes is a painful reminder that it is still a risk to raise issues of misogyny with those in power. Roach’s choice to open the film with this is a well-calculated move. It gives the viewers an understanding of why women would be reluctant to expose sexism when this is the result. The image of a powerful man belittling a woman in her workplace foreshadows the trials that the Fox News women are yet to face.

Due to Kelly’s notoriety as a right-wing commentator for Fox News one would seemingly expect her to be an ally of controversy-ridden Donald Trump. Her subsequent mistreatment therefore reminds us that abuse does not discriminate. Anyone can be subject to it at any point in their life regardless of their own politics, and we all deserve equal protection – something which we do not see Kelly receiving from her employer or colleagues.

The audience are then introduced to Gretchen Carlson played by Nicole Kidman. As we see in the film, Carlson is controversial within Fox News for her more left-wing approach in her reporting, which leads to her removal as a co-anchor of Fox and Friends and demotion to a less popular show. Carlson is ridiculed by her male co-workers and boss continuously, producing a cauldron of frustration that is yet to explode. Kidman manages to convey the anxiety of her character in a palpable way, though it’s harder for the actor to make her character memorable; Carlson has less internal conflict and perhaps more clarity in how she handles herself so, although she is sympathetic, she is more straightforward compared to Kelly and Pospisil. Carlson is the first to sue Roger Ailes for sexual harassment, but she’s warned that without testimonies of fellow Fox News workers her case does not stand a chance. She continues forward fearlessly, regardless of the consequences.

Carlson’s all-female team at Fox News includes Margot Robbie’s fictional character of Kayla Pospisil. Her character stands as a symbol for all the young anchors who were victims of the abuse at the time, while still protecting their real identities. Pospisil is young and ambitious, ready to make the world her own, and is desperate to be the face of young Republicans for Fox News. Her character represents some of the most vulnerable people in the workplace. Roach manages to make the scenes of her abuse as uncomfortable as physically possible, having Ailes’ grunts of approval and Pospisil’s short breath the only thing the audience can hear. The camera focuses not on the young reporter’s dress, but on her teary-eyed face in complete shock. To see a predator so comfortably taking advantage of someone so vulnerable and alone is a painful reminder of the stories behind #MeToo.

As we see all at Fox News rallying behind Ailes following Gretchen Carlson’s allegations, Kelly faces criticism and exclusion for not supporting Ailes along with everyone else. Her conflicting feelings about whether to back Carlson in her claims is compelling; knowing that it would be the catalyst needed to bring all the victims justice. Having spent her career putting herself first, Kelly is faced with a decision which would affect more than just her. Eventually she supports Carlson with her allegations. As a consequence, floods of current and former Fox employees come forth with their allegations – if Megyn Kelly can do it, so can they.

To see these women’s unity being the ‘bombshell’ that brought their abuser down is not just empowering, but a relief. Bombshell’s biggest achievement is forcing the audience to empathise with the isolation and loneliness that comes with battling workplace harassment and abuse. Carlson is ridiculed for leading a losing fight, Pospisil is rejected by her friend when reaching out for help and Kelly stays silent for her own protection. Anybody, regardless of political opinion or career can fall victim to sexual assault. But the film reminds us that supporting other women, listening to other women and being there for other women is the one thing that we can do to help each other.

Regardless, Bombshell still leaves a sour taste in your mouth – as the post-credits remind us Fox paid $50 million in compensation to the victims but offered $65 million to Ailes. In case it wasn’t clear, the fight for equal treatment in the workplace is far from over.

Images courtesy of Hilary Bronwyn Gayle via Lionsgate.
Image description:
1. A close up of the film’s poster, which portrays the overlapping faces of the three lead actresses and plays on their similarities, such as blue eyes and bleached blonde hair.
2. Charlize Theron as Megyn Kelly. She sits behind a Fox News desk. She’s elegant and composed. A hint of a smile on her face. There’s a lit cityscape in the background.
3. The Fox News offices. All the employees appear to be confused and shook. In the foreground are Nicole Kidman as Carlson and Margot Robbie as Pospisil.