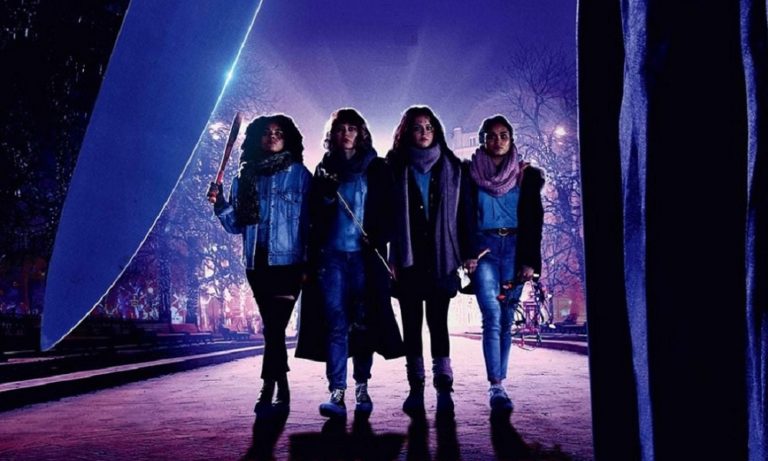 CW: mentions of rape, violence and murder. Contains spoilers for the movie.

Black Christmas (2019), a reboot of the under appreciated 1974 Bob Clark-directed slasher movie, is an homage in name only. Whereas the original Black Christmas was ahead of its time in the way it dealt with themes of abortion and abusive relationships while still being a very suspenseful and well-plotted film, the remake falls flat. Other than taking the premise of sorority girls being killed in the lead up to Christmas as a jumping off point, this film tries to put a feminist spin on the slasher movie formula but fails to be as layered as its predecessor. The film begins with a misogynist quote from the fictional founder of the college, which comes off as particularly pretentious. After Riley (Imogen Poots), the sorority leader, is raped by a local fraternity member, the rest of the girls decide to put on a show where they sing a modified Christmas song to call out the frat boys on rape culture. The plan seems to work out, until the girls find themselves being stalked by a killer who looks like a Doctor Doom cosplayer. In a supernatural turn of events, it’s revealed that the fraternity is possessed by the spirit of the misogynistic college’s founder. Their aim is to create an army bent on oppressing women everywhere and killing them if they try to speak out. Everything comes crashing down in the climax when the surviving girls storm into the fraternity house to fight with knives, axes and bows and arrows. The film expects us to believe that these characters are now badasses with cool one liners (“You messed with the wrong sisters”), despite showing them running and hiding just moments before.

It seems like director Sophie Takal and co-writer April Wolfe are trying to do for sexism what Jordan Peel’s Get Out (2017) did for racism. The films even share the same production house. However, in the case of Black Christmas, it’s obvious the moral was the first thing on the filmmakers’ minds, rather than crafting a good movie to get it across. There’s no trace of subtlety to be found anywhere.

The twist with the frat cult plays like the twist from Hot Fuzz (2007), a film with a message of not being complacent and ignoring horrible things around you. But again, Edgar Wright made an entertaining action movie first, message second.

In Black Christmas, almost every line of dialogue is full of on-the-nose buzz words and one-sided arguments. The characters may as well be looking at the camera and explaining the point. One sorority member, Kris (Aleyse Shannon), spends the whole film superficially preaching about the ‘white supremasist patriarchy’ and how ‘men have all the power’. Meanwhile though, she also coerces Riley into their song and dance scheme, despite knowing full well how traumatic it could be for her. The film never really calls her out for these actions and at the end Riley even apologies to her, saying that she shouldn’t have been complacent. This is about as black and white a situation as you could possibly get. Every male character is either super-misogynistically evil or completely incompetent. Cary Elwes plays the sleazy professor who quotes anti-feminist lines supposedly said by a woman (exactly who is left unclear) to belittle his female students, in a moment that was the closest the film came to make a legitimate point: that women can be misogynist too. Too bad the person saying it is framed as purely evil. They could have salvaged this point later when one of the sorority sisters is revealed to be working with the cult. She even says to a captured Riley that women have their place, just behind the men. But it falls apart when the boys kill her a moment later.

The only male character who is not portrayed as a horrendous, irredeemable human being is a black student – as opposed to the entirely white fraternity – named Landon (Caleb Eberhardt). But even he is shown to be useless and below the female characters, as he gets captured by the fraternity and forced into their ranks. He has to wait for the girls to come in and save the day.

The film pats itself on the back for tackling serious topics while at the same time handling them extremely superficially. Riley’s past rape is framed as a source of empowerment during the climax, which is a terrible message. It preaches the need for diversity, yet the cast features no trans or queer people. It wants to be progressive, yet the story relies on stereotyping. It expects the audience to cheer while the entire fraternity is burned alive, even the possessed initiates who had no control over their actions, something that is never addressed. Even if we look at it from a genre perspective, the film has no atmosphere or tension but relies almost entirely on clichés and jump scares.

At its heart, there could be a kernel of a good idea in adapting Black Christmas for the new decade. The fear of living under the threat of sexual assault is a very real one, far more terrifying than ghost possession. For example, the 2015 documentary The Hunting Ground tackles the issues that come with women’s reports of sexual assaults on campus being dismissed by the complacent institutions.

The 2019 Black Christmas is not bad because of the message. All films have a message, whether intentional or not. It’s bad because it is ham-fisted and incompetent in its approach. There is potential for a good story here; just a shame it gets lost.

Images courtesy of Universal Pictures.
Image description:
1. The four main characters walk side by side at night. Despite the simple winter clothing, they carry weapons and look ready to fight. In the foreground, a blade cuts through the image.
2. Riley hides behind a wall while the killer, covered by a black cape, wanders through her house. Riely looks terrified but she is armed with a bat.
3. Kris puts a hand on her mouth to cover a scream. She looks terrified. She is alone in a dark room.