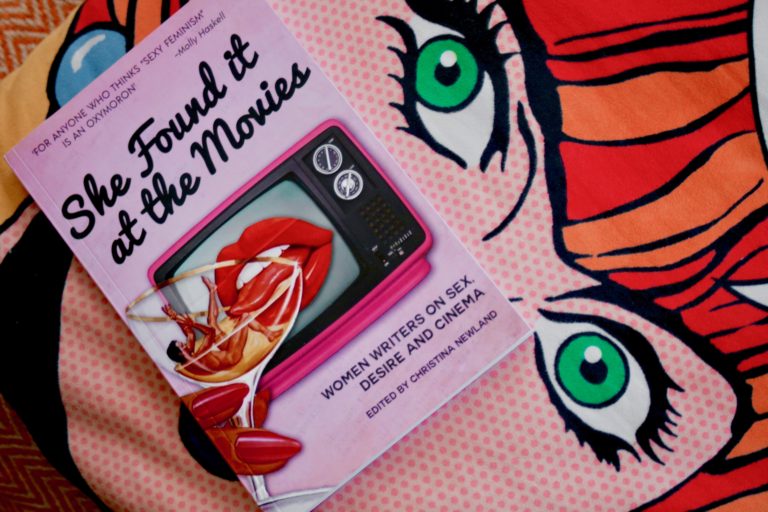 Smartly packaged as a flirty beach read, it’s clear after only a few chapters that She found it at the movies: women writers on sex, desire and cinema actually belongs on a university curriculum about the history of feminist cinema. The twist is that the book doesn’t necessarily talk about feminist films, but about the feminist response to films that were never made meant for audiences of women.

From the reason why we cried when James Dean died, to a story of coming out because of High School Musical, editor Christina Newland compiles a punchy collection of essays covering a broad range of topics. Christina has previously written for Sight and Sound, VICE, Little White Lies and many more significant cinema magazines. When I meet with her, her pink coat perfectly matches the book cover. She’s a traditionally feminine and fashionable straight white woman and that very same style has been transported to the marketing of the book. Bold red lips, a manicured hand, a tongue sticking out provocatively and a tagline that reads “Like a guilt-free chat with your smartest girlfriends.” The book is far from frivolous, but the marketing plays with many of the tropes that cause women to being judged as superficial.

My first question for Christina is how she picked the writers. She explains that she held an open Twitter call for pitches and made sure that the writers selected all came from as many diverse backgrounds as possible. While the tone is kept conversational and accessible throughout, the stories cut deep into their authors’ emotional journey of self discovery.

When I mention “Dry“, Willow Maclay’s chapter about her experience as a trans intersex woman who identifes with movie monsters and aliens, Newland says that, surprisingly, this is one of the essays that most people relate to. One reason for this might be Maclay’s ability to express her vulnerability in a familiar way by comparing it to famous movie scenes, such as Scarlett Johansson’s alien character in Under the Skin. Maclay’s comment that: “In a movie, a man is more likely to vomit than to come when seeing a body like mine” particularly stands out for its harrowing acknowledgement of the way in which trans and intersex bodies are often presented in popular culture.

“The other positive outcome from having so many diverse voices contribute to the book is the breadth of cinema history that can be covered”, Newland explains and I strongly agree. Even if some of us weren’t even born when James Dean died, we can understand what it means to love a public figure to the point where they become a part of our lives.

If a woman on screen is sexualised to please a male character, is a queer woman in the audience allowed to find her attractive? Is it playing into the problem or is it subverting it? This is just one of the many debatable questions raised by the writers of the book. Why do some find on-screen abusers fascinating? If rom-coms are primarily made for women, why is women’s sexual satisfaction never a factor in picking the right guy?


In our society, many men have a sense of frustrated ownership over women. When women launch into public fantasies like this, it means they are not exclusively focused on the men in their lives – and those egos begin to crack
In “What the movies never taught me about desire” Jessica Kiang breaks the above dynamics down to their bare essence. Movies teach women that a kiss means to be won, to be conquered, to be annihilated by a man’s desire. They never teach that women can be just as carnal and lustful as any man. To dismantle this model means to dismantle the misogynistic storytelling techniques that are such an intrinsic part of modern filmmaking. “Desire is particularly complex in a society that wants to un-complicate everything.” Christina admits during our chat.

One of my favourite chapters is definitely that: messy and complicated and sympathetic even though it doesn’t try to make amends. “I didn’t want to be Lauren Bacall, I wanted her” is written by Izzy Alcott and recalls her experience of growing up with movie icons such as Marilyn Monroe and Sophia Loren. For the longest time, Alcott thought that the fascination she felt for them was the reason she pushed other women down to compete for men’s attention. She thought that was the key to happiness. But years down the line she cheated on her husband with a woman. “I hadn’t wanted to look like the women in those films”, she realises. “I had wanted to fuck them.” But nobody on screen reflected her experience of lust. The last chapter, pointedly titled “Teenage girls know something we don’t”, is a wrap-up of everything the book has been saying through the most obvious yet striking example of all: teenage girls. Leaders of the most fearless fandoms in history, teenage girls have always been a deciding factor of where pop culture is headed. Despite this, everything they like is deemed as silly. This isn’t a current predicament: it goes all the way back to Elvis and the Beatles. The fact that these young women feel safe in their right to share their passion, their devotion, and yes, their attraction, to a celebrity or an entertainment product is a threat to the very status quo that fights to keep female desire out of the big screen. “These girls are seen as making grown men uncomfortable or even existing as a threat to them, a power imbalance that is highly unlikely to actually occur – as opposed to the contrary,” says Newland. Sheila O’Malley, author of the chapter, writes that the underlying conclusion is that, in our society, many men have a sense of frustrated ownership over women. When women launch into public fantasies like this, it means they are not exclusively focused on the men in their lives – and those egos begin to crack.

“When film criticism is dominated by men, a woman critic writing about how sexy a male lead is rarely be taken seriously and likely perceived as unprofessional,” Newland notes. With this book, she raises a middle finger to this line of thought by showing just how complex female desire is and how knowledgeable all these writers are about cinema.

“It’s naive to think art can save us,” Newland writes in her opening chapter. “But it can allow us to have difficult conversations, often made less awkward through the thin veil of fiction.”

She found it at the movies comes out on March 31st.

Due to the Covid-19 pandemic, the book launch events at BFI have been postponed. Follow @christinalefou for a digital launch party.