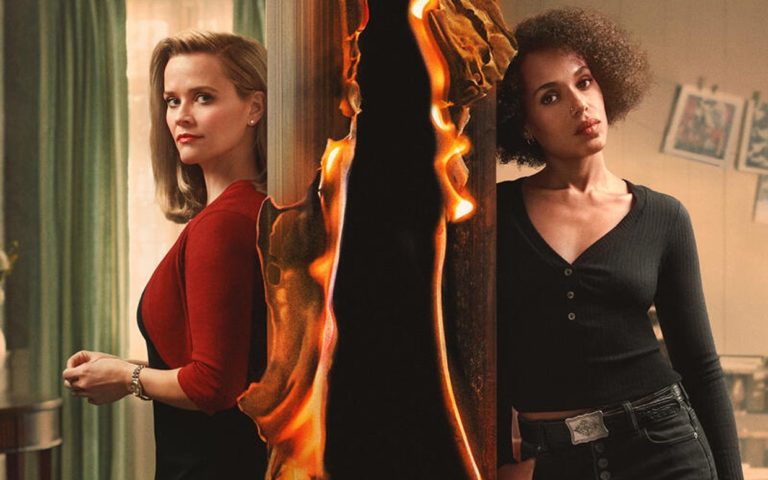 Reese Witherspoon will always be Tracy Flick to me. She will always be the ruthless teenager from Election, giving out cookies inscribed with “Pick Flick” without a hint of irony. If you haven’t seen the film, I’m jealous. It’s the film for over-achieving geeks like me, who were always bullied by the other kids for showing off what we knew.

When I started watching Little Fires Everywhere, I initially got a nostalgia kick of Tracy Flick. When we first are introduced to Elena Richardson (Reese Witherspoon), she has a calendar of all her four children’s activities over the summer. She schedules the children rigorously, while also getting on with her day as a small-town journalist. Similar to her character in Big Little Lies, everyone’s business is her business, whether that’s in her job or her personal life. So when she sees two people sleeping in their car, with what seems to be all their worldly possessions, she vows to help them.

The two people sleeping in the car are a single mother and her teenage daughter, Mia (Kerry Washington) and Pearl Warren (Lexi Underwood). The first thing Elena points out when she calls the police station to go check on them is that they are African-American. This calls our attention to the subject of race. As the story progresses, we realise the characters are on a collision course. Elena has a flat that she’s renting and the Warrens need a proper living space. As Elena’s showing them the absolutely perfect and dirt-cheap flat, she talks about the neighbourhood of Shaker Heights. It’s all fine and dandy, until she specifies that their local school was “actually one of the first schools to integrate in the city. I know that because my mother was on the board there when it happened. My own children go there.” Mia gets the subject back onto the flat, but the line is interesting. Elena positions herself as the liberal, trying to make the Warrens feel comfortable, whereas all Mia Warren would like is to be treated like just another tenant. When Mia says “We don’t expect you to change the rules for us”, she shows her awareness of what it is like to be a black woman and how she has to navigate the world in a different way. These kinds of interactions are symptomatic of a system in which BAME people are consistently reduced to their race, no matter how innocently.

I recognise these interactions everywhere. The number of people who try to prove they aren’t a threat and that they like minorities is commonplace in my world. It always has the reverse effect, making me feel like I can’t trust them. Usually this comes by way of asking where I’m really from, because being from London isn’t enough. However innocent these interactions seem, they single me out as different. My white friends aren’t asked by strangers where they’re from, unless they have a non-English accent. I recently had to explain to my white boyfriend that I talk about race so much because white people will always remind me of what I am and use that against me or, insidiously, for me, by offering unrequited help or reassurance.

In order for the story to be as true to these experiences as possible, Witherspoon and Washington co-produced the show and hand-picked a diverse team of female directors and writers.

The collision of class, race and gender permeates through the miniseries, as does privilege. Calling out privilege is associated with blame and anger, when it is simply the recognition that the world we live in gives some people a leg up over others
Motherhood binds Mia and Elena together, but their experience of motherhood separates them. The Richardsons are clearly well off. Childcare is famously unaffordable in the United States and paid parental leave isn’t guaranteed by the law, so the fact that they can afford four children, prestigious colleges for them and a mansion is a clear intersection between class and motherhood. In contrast, Pearl Warren never had her own bedroom before. Although Mia introduces herself as a professional artist, she actually has to work several low-paid hospitality jobs to make ends meet. Things aren’t perfect in Elena’s household either, albeit for a different reason. Elena’s youngest daughter Izzy (Megan Stott) is being bullied at school by a group of classmates that have decided she’s a lesbian. In the three episodes that have been released no one says the word “lesbian”. Izzy hasn’t said that she likes girls, but this is the assumption everyone at school makes based on her masculine wardrobe and her lack of interest in having a boyfriend. Izzy constantly feels on the spot and reaches a breaking point in episode three, when she kisses a random boy at prom with the sole purpose of proving the bullies wrong. She has to worry all the time about how she is being perceived so that she can be safe. The miniseries is set in 1997 and Matthew Shepard, a gay student in the United States, was killed in 1998. It was a particularly scary time to be gay.

The collision of class, race and gender permeates the miniseries, as does privilege. “Privilege” has become a sort of dirty word in public discourse. Calling out privilege is associated with blame and anger. And while I am angry at billionaires, say, for hoarding wealth that could be used to safeguard people and environments, privilege in itself shouldn’t be a dirty word. It is simply the recognition that the world we live in gives some people a leg up over others.

Would you rent a flat to a single mother with no references and no stable income? Would you let your daughter play with the posh kids? Would you encourage your child to deny their sexual orientation so that they can lead a safer existence?

Little Fires Everywhere cannot give an easy solution to these issues, but it can give us an outlet to explore what we would do in Elena or Mia’s situations.

Images courtesy of Hulu.
Image description:
1. The main characters Elena and Mia stand in their respective living rooms. They look into camera and are separated by a burning wall.
2. Elena and Mia in Elena’s posh house. Elena smiles while Mia looks is serious and looks off camera, in a different direction from Elena.
3. Izzy sprays a piece of furniture with black paint. She is outside, in a green space. She wears simple clothing and has “NOT YOUR PUPPET” written on her forehead. She looks annoyed.