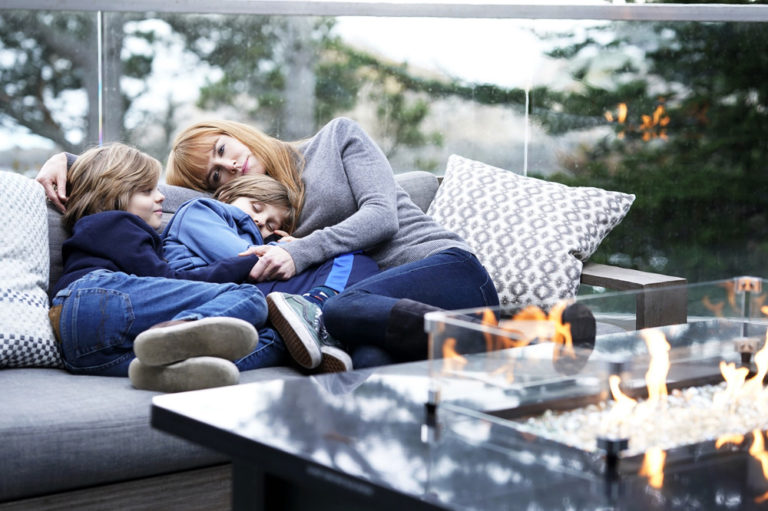 The implosion of the perfect mother

We return to David E. Kelley’s adaptation of Liane Moriarty’s novel, Big Little Lies, in the wake of a murder and a constructed lie.

There are moments over this seven parter when I found the conversations drying up. The characters go round and round over the same issues with not much progression. But what this series lacks in plot it makes up for in the psyche of these women; most of them start to crack and crumble over the “shelf life” of a rather patched-up lie. The lie on the surface is about Perry’s murder, but the strain also reveals pressures on their roles as women, wives and Monterey Moms.

Being a Monterey Mom – one that rarely falls short of perfection – is a constant expectation that each character battles. They aren’t just women sniping at the school gates over who got fatter over the summer. They are such great characters because of the detail that is put into their lives and identities. The Monterey five are quite a random collection of distinctly clashing characters; they are brought together despite their differences because of their shared lie. But this connecting factor also threatens to break them apart. There is a constant struggle between being bonded together in solidarity and the possibility of betrayal.


When you search the word ‘flawed’ the words ‘unsound’, ‘defective’, ‘distorted’, ‘erroneous’ and ‘weak’ appear. But I believe it’s the flaws that make these women so relatable
Enter Mary Louise (Meryl Streep), a new matriarch to add to the pack. With her brutal honesty and tactlessness, she cracks the surface of the Monterey five. Mary Louise is the mother of Celeste’s abusive late husband, Perry. She arrives as a helping hand, however she quickly becomes disruptive, bordering on threatening. Going from calling Madeline “short and untrustworthy” to filing for custody of Celeste’s children, Streep knows how to marry comedy and drama within a truly tragic and aggravating character. She questions each mother’s parenting tactics as well as how far parents are responsible for the actions of their child.

Bonnie’s mother abuses her as a child, Madeline’s relationship with Ed is strung out in front of her children, Renata’s daughter has a panic attack because of her mother’s stress, Ziggy worries about becoming like his father, twins Max and Josh find out their beloved father is a rapist and have to make sense of the violence in their life, while Celeste struggles with her mental health.

This season presents conflicts between parent and child, but more unusually it opens up a discussion around women in the role of the abusers and whether their behaviour is more easily judged as negative for not following society’s expectations.

Mary Louise is blamed for her son’s sins: her grief over a lost child might have caused psychological issues in Perry.

Bonnie’s relationship with her mother, Elizabeth (Crystal Fox), comes under scrutiny in a series of flashbacks. Elizabeth’s abuse is presented as a factor in Bonnie’s distant and reckless behaviour this season. In killing Perry, Bonnie is not just ridding Celeste of her abuser, but she is freeing herself of the weight of the trauma she suffered. Bonnie ultimately blames Elizabeth for pushing her into destructive relationships.

Just like Bonnie, Celeste is clouded by the trauma of her past. She battles with her love for Perry and the marks left from his abuse while trying to raise her kids.

Mary Louise seems to imply that even when abusers are men, women should be held responsible. She believes that Celeste encouraged violent behaviour in Perry by engaging in violent sex with him. She also insists that Jane was “mistaken” in naming Perry as her rapist and that she could have been drugged and raped by any other man.

Through a complex web, this season explores what it is to be a woman and a mother. All of the characters emerge as human and flawed. When you search the word ‘flawed’ the words ‘unsound’, ‘defective’, ‘distorted’, ‘erroneous’ and ‘weak’ appear. But I believe it’s the flaws that make these women so relatable. It is in their mistakes that they stop being defined by their gender or their motherhood, but as actual people. So when they are punished for the actions of men, or for stepping out of the lines of perfection as women, I hope the viewer feels the same sense of outrage that I do. It is a great thing that dynamic women, who historically have been punished or killed off, are rewarded instead. Each of the Monterey five finds peace and happiness, either ridding themselves of a toxic authority or evading the traditional maternal role while maintaining their family structures.

Images courtesy of iMDB.
Image description:
1. Celeste is on her couch with her two sleeping kids. It’s raining outside and the fireplace is on. It’s a quiet and peaceful atmosphere.
2. Celeste and Mary Louise sit next to each other at the dinner table. It appears Mary Louise is either laughing or screaming. Celeste looks over to her with a tense face. The room is dimly lit. It appears to be late evening.