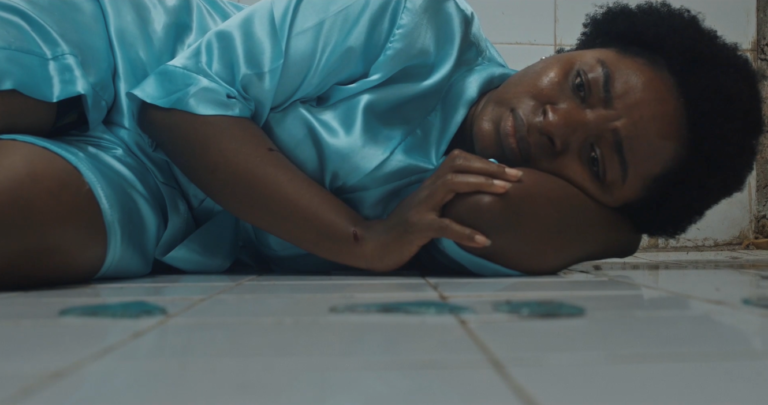 For Maria Ebun Pataki, directed by Damilola Orimogunje, is not an easy film to watch.

Constructed as an arthouse film, the movie develops at a slow pace, with minutes of screen time completely filled by silence. Its minimal cast and domestic settings, together with subtle dialogue, carry the weight of the story. But it’s well worth the effort because the film’s intention is to open up a conversation on the stigma surrounding postpartum depression – and that can’t be an easy conversation.

The plot revolves around Derin (Meg Otanwa), who struggles to bond with her child Maria after a traumatic birth that forced doctors to remove her uterus. Derin has trouble engaging with the world around her. Her relationships are put to the test as everyone around her fails to provide the mental health support that she needs.

“Just as mental illness is still largely dismissed as a myth in my country, Nigeria, postpartum depression often goes unrecognised,” explains Orimogunje in the press release. “I witnessed postnatal depression first-hand through an aunt, who lived with my family at the time. […] Meg Otanwa, who plays the lead in the film, revealed that her close friend had just lost his wife to postpartum depression.”

The subject is clearly close to the filmmakers’ hearts. This shows in the delicacy given to the characters’ struggles. Derin’s relationship with her husband, Afolabi (Gabriel Afolayan), is the central emotional core. Afolabi is never framed as a villain. He tries over and over again to reach out to Derin. He listens, too. But his lack of understanding of mental health issues means that, whenever Derin opens up about what she’s feeling, he ends up dismissing her as “ridiculous” or as “looking at things the wrong way”. Albeit well-intentioned, he inevitably keeps framing her as responsible for not acting as the mother everyone expects, rather than guiding her towards professional help.

The couple’s daughter, Maria, is rarely shown on screen. When she appears, she is often crying and disruptive. The film uses the baby’s loud cries to create an uncomfortable and overbearing experience, manifesting, through sound, the pressure that Derin herself feels. Although the topic of postpartum depression remains quite taboo in worldwide cinema, For Maria Ebun Pataki is particularly bold in the way it presents a stripped back and raw glimpse into the matter, without hiding behind a mainstream genre (as in The Badabook, for example) or a more Hollywood-esque facade, as in Tully.

Derin spends the first half of the film in almost complete silence. She becomes more vocal in the second half, which increases the audience’s frustration because her words land nowhere. There’s a monologue that is particularly heartbreaking and gives voice to many of the terrifying feelings women experience when faced with this condition. “I’m losing my hair and my laughter, that’s what I’m scared about,” Derin tells Afolabi. “But my uterus being removed? I’m not scared about that. I’m relieved. I wanted four children. Now that I have one child, I want none.”

It’s clear from this snippet that screenwriters Tunray Femi and Damilola Orimogunje don’t hold back for fear of the character seeming unsympathetic. What’s more, Derin is actually diagnosed in the film. Postpartum depression becomes something concrete, something with a name, not just a theme hidden behind layered metaphors.

According to a 2018 UK research by the Co-op and the Red Cross, 43% of new mothers under 30 report a constant feeling of loneliness

Orimogunje, in the press release, offers a broader perspective on the issue: “Giving birth to a child is typically the most prized outcome of marriage across African cultures. So important that the husband is often pressured to marry additional women if his wife cannot conceive early in the marriage.” And if we look at the UK in recent years, we can see a similar pressure operating. According to a 2018 research by the Co-op and the Red Cross, 43% of new mothers under 30 report a constant feeling of loneliness. People who choose not to have children are still viewed as exceptions to the norm. If motherhood keeps being presented as the greatest achievement of a woman’s life, what is there to say when the gift doesn’t live up to expectations? When the gift brings physical and mental damage? This question matters even more in an age where an intensification of strict anti-abortion laws threatens women’s safety and the severity of climate change is an additional factor to take into consideration when having children.

For Maria Ebun Pataki is opening a can of worms many are still too scared to touch. It’s a brave decision, executed with empathy and respect. But even if the film breaks the silence, it’s up to us to do the rest and carry the conversation forward.

For Maria Ebun Pataki is having its worldwide premiere as part of Film Africa 2020. It will screen on BFI Player at 6pm on November 1, followed by a live director’s Q&A at 8pm.

Image courtesy of organic press.
Image description:
1. The main character Derin lies on the bathroom floor in bright blue silk pyjamas. There are visible cuts on her arms and she appears to be on the brink of crying.