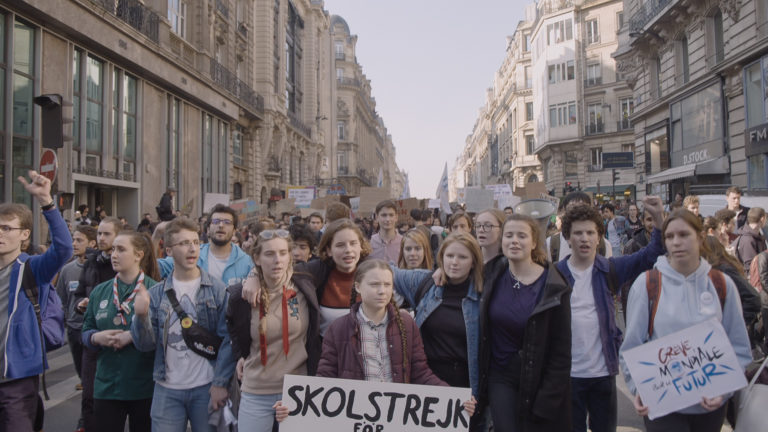 Shouldn’t we all be Greta?

Greta Thunberg. In the course of the past two years, this has become a name familiar to everyone. Appearing seemingly like a comet in a (highly-polluted) sky, the Swedish sixteen-year-old activist seemed to go from protesting alone on the steps of the Swedish parliament to sailing on a heroic boat voyage to the United Nations summit in almost the blink of an eye.

What we’ve heard and seen of Greta Thunberg has been filtered, as media outlets were quick to call her a messiah and just as quick to dismiss her, in the best case scenarios, as a “complicated adolescent who self-describes as autistic”. In the worst cases, well, it’s obviously death and rape threats.

But the newly-released Nathan Grossman documentary I am Greta offers a peek behind that filtered curtain. Grossman spent two years by Thunberg’s side and structures the film as a daily chronicle of the evolution of her phenomenon. The first ten minutes, showing Thunberg’s initial protests outside of the Swedish parliament, feel almost like watching a superhero origin story. Perhaps it’s because of the braids, but I’m immediately reminded of the resilience of fictional heroes like Katniss Everdeen.

It was never Grossman’s intention for the film to be entirely about Greta Thunberg. He meant to include those first snippets in a larger documentary about child activists. But the result is a raw and bittersweet coming of age tale in a world on the brink of extinction.

What the documentary puts across more clearly is Thunberg’s focus and earnestness. She always addresses everyone very directly and she doesn’t shy away from uncomfortable remarks and confrontations. Early in the film, during her first appearance at a climate change conference, she complains to her dad, “I can’t believe they serve meat at an event like this.” Every time someone approaches her for a selfie, it’s almost like she’s trying to slither away and be done with it as quickly as possible. Grossman remains cautiously on the side, observing the more inconspicuous details. For example, after Thunberg’s urgent speech at the Civil Society for rEUnaissance, the floor is given to the European Commission President, Jean-Claude Juncker, who immediately offers excuses as to why certain radical actions in regards to climate change require time to be put into action. Thunberg quietly takes off her translating headphones. She doesn’t care about excuses.

“Mass extinction is a bit harsh, it could be cut,” her dad suggests as she writes a speech. “Mass extinction is super important,” she reiterates. She writes in English and French, neither of which is her mother-tongue, and at every instance she has to make sure the spelling is correct, even if it’s for a speech she’s reading out loud. At one point, this triggers a panic attack. The camera stands just behind the door frame, looking at Thunberg alone, up in bed. It’s unclear for how long this lasts, but eventually, Thunberg takes a sip from her reusable bottle, picks her laptop back up and continues writing.

“Everyone says it’s so lovely to have me here,” she ponders as we watch her speaking in the House of Commons. “Whenever I’m in these fancy environments, palaces, castles, I feel very uncomfortable. It feels like everyone is playing a game, like it’s all just pretend. It feels fake.” This is the core of Greta Thunberg’s inability to fit in. She doesn’t play by the rules. The bureaucracy, the debates for the sake of debating, the fame. It all feels irrelevant. “The house is on fire” is not just a metaphor. It’s an absolute priority. The panic is clear in the way she speaks and she behaves, even when out of the spotlight. This is how she feels, everyday. We forget that this panic is justified. Why does David Attenborough’s Extinction: The Facts leave “fans terrified” while Greta Thunberg’s warnings get dismissed? Not only that, but while she creates such divisive opinions, Attenborough is Britain’s most beloved public figure, according to a YouGov poll. Is it because she’s young, or because she’s a woman who won’t compromise, or maybe a bit of both? Nobody likes being told we’re all going to die, but the way the message is conveyed, as well as who speaks it, matters. Thunberg is, after all, the very Western tip of the iceberg. Native American and other marginalised activists, such as Xiye Bastida and Jamie Margolin, have been speaking on the subject for years without ever getting the same spotlight. It is the same old matter of privilege, which also allows critics to dismiss Thunberg’s achievements because of the support of her middle-class family, while failing, however, to research less-privileged narrations.

But since we’re on the matter of privilege, there is an aspect that the documentary examines in much-needed refreshing light. Grossman celebrates Thunberg’s Asperger syndrome as her driving force. Her experience and competence in the matter of climate change are not that of a classic sixteen-year-old who might have heard about it in class once every semester. Thunberg spent a significant portion of her adolescence reading and studying the subject. Her neurodiversity is a power that she proudly reclaims. In one of the interviews shown in the documentary, she corrects a journalist who asks her if she suffers from Aspergers. “I wouldn’t say suffer,” she points out. “But I have it.” This is an essential shift in the use of ableist terminology. “I wish more people had Aspergers when it comes to climate change,” is actually Thunberg’s last statement in the documentary.

It’s never comfortable to be judged or made to question whether we are doing enough. But I am Greta’s greatest achievement is to remind us, through simple scenes of raw, familiar, everyday intimacy, that Greta Thunberg is not a God-like figure of judgment. She’s a real, complex young person with scientifically-proven concerns about her future. She’s sarcastic, stubborn, focused, she misses being in school, she gets seasick and, ultimately, she does the best she can with the resources and platforms available to her, even when this shouldn’t be her responsibility.

I Am Greta comes out in UK cinemas on October 16th.

The film’s revenue will be distributed among organisations and projects fighting for a sustainable world.

Images courtesy of Dogwoof and Organic Press.
Image description:
1. Greta Thunberg leads a “Fridays for Future” march with hundreds of other young people. They walk through a city centre.
2. Greta Thunberg laughs as she holds her hat in place. She appears to be caught in the wind on a boat. On the right, someone is taking a video.