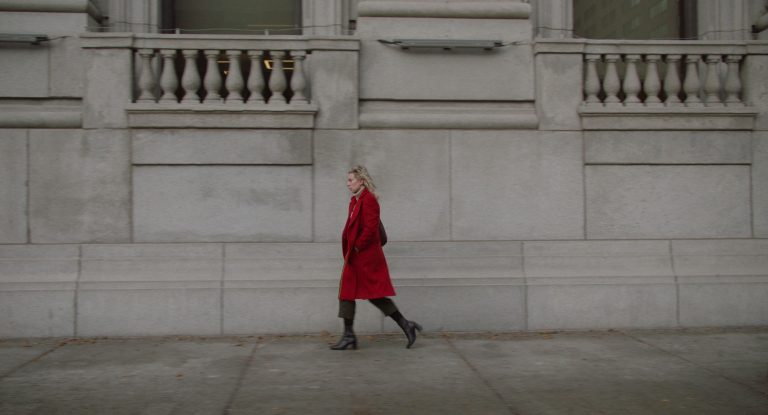 PIECES OF A WOMAN: Vanessa Kirby as Martha

Tragedy in the Garden of Eden

Proximity is something we have all given up during the Covid-19 pandemic and something most of us look forward to recuperating. However, the extended single-shot sequence of a traumatic home birth, marking the first half-hour of writer/director team Kornél Mundruczó and Kata Wéber´s Pieces of a Woman, brings a harrowing edge to what should be an intimate moment of joy. Instead, the intense gaze of the camera upon the young mother Martha’s (Vanessa Kirby) agonised face refuses us any relief from the sheer claustrophobia. We are forced to look on as Martha moves from pain, to elation, to grief.

Kirby’s performance can only be described as a phenomenal masterclass in dramatic realism, preparing us for the suffocating tragedy of her child’s premature death. There are other skilfully shot premonitions, notably the early close-up of the cake at the baby shower – complete with a tiny icing sugar baby – cruelly sliced in two. Once we move past the powerful introductory sequence, however, the aftermath dulls in comparison.

As noted by the New Statesman´s Ryan Gilbey, Mundruczó and Wéber´s Pieces of a Woman is an ‘uneven study of parental grief,’ often reliant on draw-out, lingering shots of the characters engaged in solitary thought, which feel insincere in comparison to the impact of the opening sequence. While Kirby continues to emotively convey Martha’s alienation and dissonance from the world around her, we are distracted from her personal story of turmoil by superfluous details, such as the infidelity of her ‘boorish’ engineer husband Sean (Shia LaBeouf), and an ongoing court case in which her midwife (Molly Parker) is accused of gross negligence.

The abuse allegations made against LaBeouf in recent months have been difficult to ignore. Kirby herself issued a statement during the film’s production in which she refused to comment on the ongoing lawsuit between singer-songwriter FKA Twigs and her ex-partner LaBeouf, yet she has been supportive of Twigs´ decision to speak out on the abuse she suffered. LaBeouf´s performance in Pieces of a Woman thus makes for disconcerting viewing, particularly as we watch his character, Sean, relapse into alcoholism and violence against Martha.

As time passes, each section of the film opens with a view over the bridge Sean has been contracted to build, which remains unfinished for the majority of the viewing time. As an introductory shot, the wide landscape of the mountainous river the bridge crosses is spectacular, yet the potentially symbolic meaning is lost on me. The strongest elements of the middle section are – by far – the scenes of Martha’s mother Elizabeth (Ellen Burystn), a Holocaust survivor grappling with the debilitating effects of old age. Elizabeth’s inability to understand Martha’s coping mechanisms demonstrates how an intergenerational disparity in processing and addressing grief may impact family relationships. Elizabeth is – at least from Sean’s perspective – the epitome of the overbearing mother-in-law, even going as far as paying for the couple’s expensive new car and arranging the funeral for the baby. When Martha decides to donate her baby to science, Elizabeth is furious. These interactions, which are fuelled by a rift between mother and daughter and accentuated by cultural differences, are perhaps the most reflective element of Pieces of a Woman.

Elizabeth’s journey towards empathising with her daughter seems to bring Martha back to the real world, her moment of clarity grasped during a tearful courtroom scene. Watching Elizabeth’s face beam with pride as Martha, quite literally, stands up for herself, is one of the most powerful moments within the closing movements of the film.

Martha is often shown with an apple in hand, recalling the biblical tale of Eve, the first woman, cursed with ‘pains in childbearing’ for eating a fruit from the Tree of Knowledge. Pieces of a Woman metaphorically envisions Eve as the hero of the Genesis tale

Martha’s journey throughout Pieces of a Woman is observed behind glass lifts, windows, and doors. These physical reminders of the rift between her quiet act of mourning are juxtaposed with the externalised performance of grief enacted by her family and co-workers, who are more preoccupied with funeral arrangements and financial compensation that the emotional weight bearing down on Martha herself.

Punctuated throughout this slow-burning tangle of grief are symbols of hope, mostly in the form of apple seeds. Martha is often shown with an apple in hand, recalling the biblical tale of Eve, the first woman, cursed with “pains in childbearing” for eating a fruit from the Tree of Knowledge. We see Martha growing the apple seeds in her refrigerator, on small pieces of cotton wool, which seem to grow as her personal independence flourishes. Pieces of a Woman metaphorically envisions Eve as the hero of the Genesis tale, with a hallucinatory closing shot of a young girl climbing a tree and eating an apple from its branches. We hear Martha off-screen calling for her to come inside. Whether Martha is given a happy ending in this utopian Garden of Eden is something left up to audience interpretation.

Pieces of a Woman starts off strong and ends with an ambiguous glimpse of hope, yet its two-hour and six-minute runtime make it a grueling watch with very little nuance or narrative development at its core. While I would disagree with the Guardian’s comparison of Martha’s disillusionment as a “pop-art image,” the mixture of poorly rounded storylines crammed into the middle section of the film deviated from what could have been a stronger emphasis on Martha’s own experience. Populated with unnecessary characters, such as Martha’s car-salesman brother-in-law Chris (Ben Safdie), Pieces of a Woman went off on a number of tangents it could not always sustain or tie-up.

While unfocused in parts, Pieces of a Woman is a compelling and unflinching take on the broader impact of a very specific and personal form of grief.

Pieces of a Woman is now showing on Netflix UK

Images courtesy of Netflix Media Center.
Image description:
1. Martha strides along the pavement in a blood-red coat. The colour is particularly striking against the white wall in the background.
2. Martha lies in a bathtub with what appears to be an agonising expression on her face. Sean’s head can be seen in the foreground, looking at Martha.
3. Martha and Elizabeth stand face to face against a stained glass window.