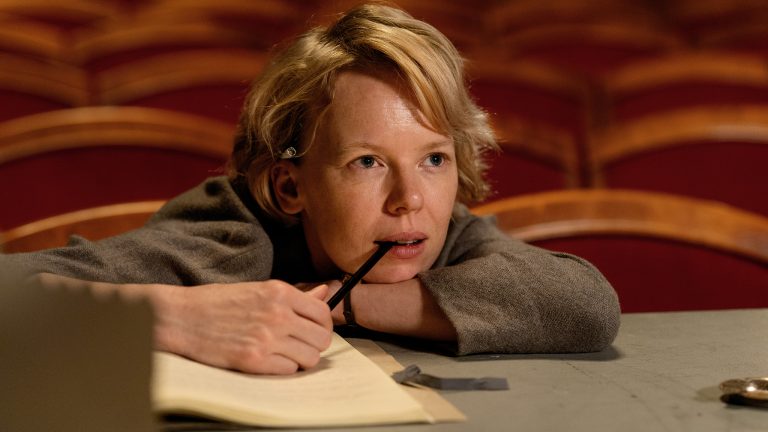 Moomins, the friendly hippo-like trolls, are familiar to children. The nine books, written by Tove Jansson, are a common sight in children’s libraries. While you can easily buy a large plush doll of Moomintroll or the Snorkmaiden, those who fondly read these books aren’t likely to know much about their creator Jansson. The author, who had relationships with men and women and led a bohemian lifestyle, has a fascinating life story herself. Screened at the BFI Flare festival, Tove, directed by Zaida Bergroth, attempts to trace Tove’s personal and professional growth in the 1940s and 50s.

The Moomin books lined my bookshelves as a child. They had recently been reissued as a pastel-coloured collection of six books and the pages of my copies were well-thumbed as I pored over the ink illustrations again and again. For the uninitiated, the book series is about a family of Moomins – a mythical troll species – who live in Moominvalley. They have all sorts of friends in the valley, all of whom are imaginary creatures. The Moomins spend their time going on adventures. They explore comets that fall in their valley, or they get ready to hibernate in the winter. Their young son, Moomintroll, is bound to get into trouble. The books are full of light comedy, and the stories also reject capitalist culture – which is a bit of a surprise to find in children’s literature! Tove Jansson’s creations will also be familiar to many people who watched the TV series growing up. Many of her magical creations were based on people she knew in her life and my expectations were high to see how the life of the real Tove was stitched together with her influential children’s books.

Pöysti’s Tove is mercurial. She lights up every scene she is in, and her performance alone is enough to draw you into Tove. When she begins an affair with Vivica, it feels as though a door to another room has opened inside her soul

Alma Pöysti stars as the effervescent Tove. Cheery and sparky, after the shuddering end of World War Two, she lives in the shadow of her more accomplished father, Faffan (Robert Enckell), a sculptor by trade. He is dismissive of his daughter’s art and is seemingly proved right when she fails to receive grants time and time again. Although she is continually broke and attempts to give her landlady one of her paintings in lieu of rent, Tove’s spirit can’t be dulled. She navigates the challenging course of trying to create artwork that truly represents her in exchange for a good income. The Moomins themselves do not begin as a serious endeavour. She doodles them on scraps of paper to take her mind off her more experimental art. Despite her passionate and artistic drive, she drifts into a rather mechanical affair with politician Atos Wirtanen (Shanti Roney). They’re friends, but he doesn’t excite Tove sexually. On the other hand, when Tove meets Vivica Bandler (Krista Kosonen), her world shifts. Pöysti’s Tove is mercurial. She lights up every scene she is in, and her performance alone is enough to draw you into Tove. When she begins an affair with Vivica, it feels as though a door to another room has opened inside her soul. Tove’s relationship with Vivica isn’t a sexual add-on or a lightly explored fetish; navigating her sexuality is key to her happiness and her understanding of herself. Tove has never felt this way before, and when Vivica moves away to Paris, they keep in touch with long letters declaring their love for each other. But in contrast to Alma Pöysti’s fantastic dynamic performance, Krista Kosonen’s Vivica seems slightly uninterested in the whole romantic arrangement. Kosonen’s performance is simply not up to par with Pöysti’s and, as a result, their relationship feels desperately one-sided.

Tove’s life whizzes by like the pages of a flipbook; chapters on friendships, lovers and family members are shut as quickly as they are opened. Her father, who is such a domineering force in the first half of the film, virtually disappears. Her future life partner, Tuulikki Pietilä (Joanna Haartti), appears in a minor secondary role towards the end.

The film demands familiarity with Tove’s life and the Moomins, but to anyone unfamiliar with her life, the plot only serves to alienate

While Tove’s relationships are most affected by the film’s erratic nature, the art for which she is most well-known is oddly skimmed over, too. While Tove’s struggle for artistic acceptance takes centre stage here, the creation of the Moomins takes a backseat. Bizarrely, Tove’s creations are not instrumental in the narrative, to the point where the universe of the Moomins is barely seen. As these illustrations morph from her relaxing hobby to her full-time job, none of the steps in between are illustrated on film. Suddenly she’s no longer a penniless dreamer, but her novel, A Comet in Moominland, sits proudly on her shelf. While there is reference to the fact that some characters are based on people that she knows in real life, many of her fictional characters are not grounded within the context of the Moomins within the film. There’s so much disconnect from each separate life event, be that personal or professional. The film demands familiarity with Tove’s life and the Moomins, but to anyone unfamiliar with her life, the plot only serves to alienate.

However, despite the flickering nature of the script, there are occasional flashes of brilliance in the editing and cinematography. The film has a dusty sheen throughout, as though it has freshly clambered out of the rubble of war-torn Helsinki. Some of the cinematography is breathtakingly inspired. Unfortunately, this isn’t enough to stop the film from feeling distinctly like a TV movie. There’s a lack of ambition in the musical score. Each year’s announcement bookmarks a chapter of Tove’s life, whether it be 1947 or 1952. Each year is then followed by the swing of a stereotypical 1940s or 1950s piece of music – as if that is all the window dressing needed to couch the film in the past. The same Glenn Miller song is played three times throughout the film, a lazy way to indicate that Tove is young and bohemian.

Philip Pullman described the Moomin series as “a perfect marriage of word and picture”. Unfortunately, Tove falls a little short. While Alma Pöysti’s performance is mesmerising, the film’s tone is jumpy and erratic, as though it couldn’t quite decide what aspect to focus on.

Images courtesy of BFI Flare.
Image description:
1. Tove is leaning on a desk in what appears to be a theatre hall. She looks up at something while chewing on a pencil.
2. Tove and Vivica are in bed naked. Their bodies are covered by green and white sheets and they look at each other, laughing.