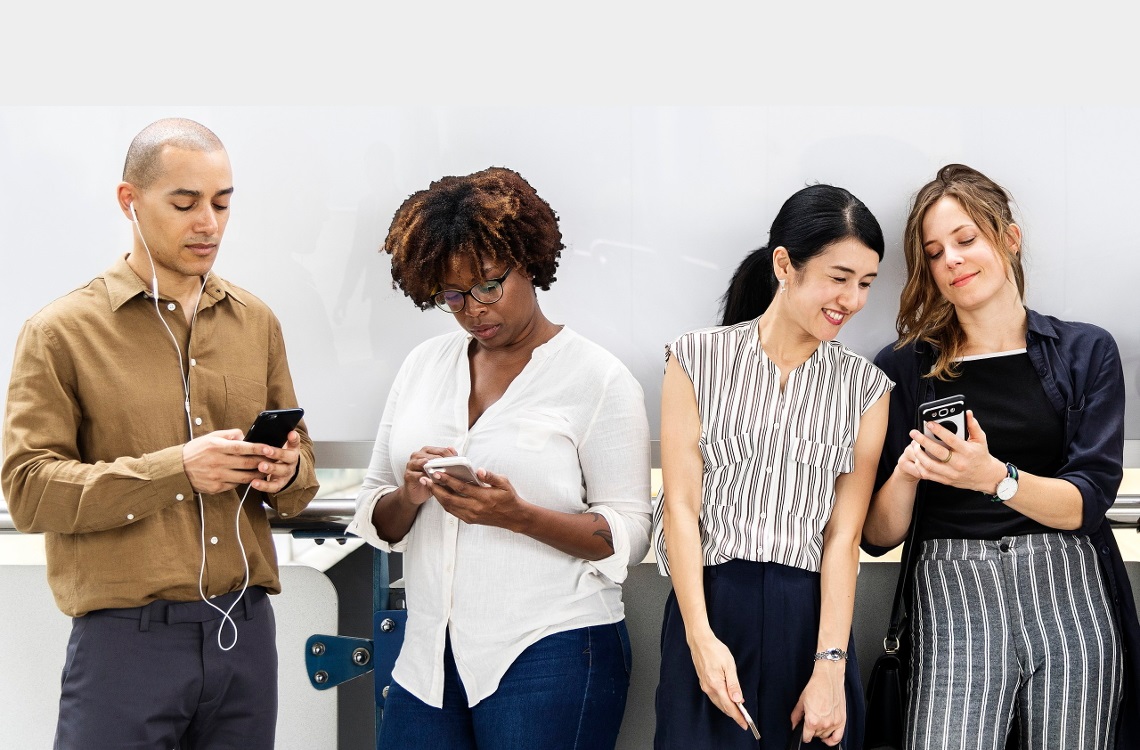 I’ll keep it brief this time and let the links do the talking but, this week, you also get to enjoy a delightful depiction of people avidly consuming internet content on their smartphones in my chosen image: not quite ‘women laughing alone with salad‘ level, but the stock photo vibes are strong in this one!

As always, the articles in this round-up haven’t been endorsed by the whole team. We do our best to add appropriate content notes, but some links may contain further upsetting details about oppression and injustice, so please click with caution.

If you’re already registered as a subscriber and notice we’ve missed out any important articles/issues from the past week, you can get in touch with us via the comment form at the bottom of this page (see the preamble in our 18 July round-up for the state of play on this). But, if you aren’t, please feel free to swing by our Twitter account or our Facebook page instead!

‘We’ve been waiting for this’: Rachel Yankey on women’s football, diversity and her legacy (Um-E-Aymen Babar, gal-dem)
From the article: “I just wanted to play and someone gave me another opportunity to play. It was fantastic and I scored on my debut too so I have really good memories from that. That’s why when I look at this England team there are so many young players and they just want to play football and show how good they are.”

England’s Lionesses are roared on by history: now it’s time for a new legacy (Carrie Dunn, Open Democracy)
From the article: “Regardless of England’s triumph, this tournament is not and cannot be the pinnacle; it is merely a stepping stone. Investment and media coverage must continue if the Lionesses are to win more trophies, but also to encourage girls and women to keep playing the world’s favourite sport for fun and fitness, and to simply enjoy watching the beautiful game as a matter of right, as their male peers have always done.

“And a formal tribute to the pioneers of the women’s game is inevitable – those still with us, and the ones we have already lost. They are the ones who literally sought out space to play when the authorities banned them. They are the ones who put up with the heckles, who gave up weeks of work, who paid for the privilege of representing their country. It is they who kept the game alive, who built the stage for Sarina Wiegman’s Lionesses to step into the spotlight and shine.”

All-white Lionesses ‘stop black girls from dreaming’ about playing for England (Author not shown [01 Aug 2022], The Voice)
From the article: “Commentator and former professional player Eilidh Barbour remarked on the BBC the fact that the starting lineup and substitutes were white.

“She said: ‘It was an historic eight goal victory for England last night as the Lionesses secured their place in the quarter finals. But all starting 11 players and the five substitutes that came on to the pitch were all white. And that does point towards a lack of diversity in the women’s game in England’.”

‘A high point for feminism’: Woman says a stranger bought her a pint because of Lionesses win at Euro 2022 (Laura Hampson, Independent)

Chloe Kelly’s topless Euro celebration hailed feminist moment of the decade (Sarah-Jayne Tobin, Evoke)
From the article: “Here was a woman celebrating herself and her body and what she can do without an ounce of self-consciousness, self-doubt or sexual innuendo.

“She was caught up in the moment of elation taking the extremely well-deserved plaudits surrounded by her team mates who worked together all tournament long believing in themselves and playing to their own strengths rather than adapting to suit their opponents.”

When women’s football was bigger than the men’s game in England, and how it was banned by the FA (Cahal Milmo, iNews)

England win Euro 2022: how women’s football beat the sceptics to breathe new life into the game (John Williams, The Conversation)

Giving out flowers on TikTok: is this a ‘random act of kindness’ or just benevolent ageism? (Natasha Ginnivan and Kaarin Anstey, The Conversation) [Australia]
From the article: “These TikTok random acts of kindness can have the unfortunate overtone of the twin prejudices of ageism and sexism. Older women targeted in this way can be left feeling like their identity is reduced to being just an older lady in need of pity.”

Must be ‘fit and active’ or ‘digital native’: how ageist language keeps older workers out (Chris Farrell, Market Watch)

Anne Hathahate was rooted in misogyny – and a new generation aren’t standing for it (Meg Walters, Independent)
From the article: “It’s impossible to examine this movement […] without touching on the gender bias going on with the Hathahaters or twee-scorners. After all, it’s hard to think of many male celebrities who were subject to similar levels of derision for simply being themselves. It’s clear today that it wasn’t just that we disliked earnest women – we didn’t believe in it.”

Resisting the cost of living crisis in the UK could be the tipping point for socialist solidarity (Tatiana Garavito, gal-dem)
[CN: domestic violence]
From the article: “These international power shifts have something in common: they run on socialist manifestos that are built and enriched by grassroots movements and they champion a politics centred on justice. Interestingly, these wins have been sparked by the cost of living crises exacerbated by neoliberal policies and fossil fuel dependency.

“I can’t help but wonder if resisting Britain’s spiralling cost of living crisis can bring our own socialist solidarity, and if we dare to truly imagine, a long-term socialist victory.”

WE DID IT!!! After a two year slog of campaigning against people with far more institutional power and privilege than a group of sex workers, we beat the nil-cap with a vote of 9-1 (Bristol Sex Workers Collective, Twitter)
From the thread: “The dancers have been put through an incredible amount of stress over the last two years, not only having to defend their work rights but their humanity. They have had to listen whilst they were blamed for gendered violence. Their experiences dismissed as sex industry lobbying.”

Queer Whore Collective: I Told My Parents That I’m A Sex Worker (Writer: Whorezontal Perspective, Polyester)
From the article: “A turning point of realisation was when I watched my older cousin, who also waitressed and usually never wore makeup to anything, getting ready for work. She told me she wants the effort of putting on makeup to be worth it at least. Implying that she wouldn’t do it for free, but knows that she will make more money wearing it that evening, so is willing to invest the extra 20 minutes getting ready. I don’t think she would ever consider herself a sex worker, or anything related to it. But, like many others, like me long before I started sex working, she sure leaves her shift with more money for being unspokenly sexualised.”

This Person Went Mega-Viral for Listing Sex Work as Their Job on LinkedIn, And It Started a Massive Debate About “Valid Professions” (Alexa Lisitza, BuzzFeed)

A Lesbian Utopia: 30 Years of A League of Their Own (Louisa Maycock, Girls on Tops)

Where does the British public stand on transgender rights in 2022? (Matthew Smith, YouGov)
[CN: erosion in support for trans rights; also see quote in link below]

Here’s How Trans People Feel About YouGov’s Survey on Trans Rights (Gemma Stone, HuffPost)
From the article: “I […] spoke to jane fae, the chair of Trans Media Watch, a UK organisation advocating for accuracy and respect when reporting on trans lives. She’s filed a formal complaint accusing YouGov of including ‘misleading’ questions within the survey. For example, the public were asked if they thought ‘gender reassignment surgery’ should be available to under 16s. In reality, transitional surgeries are only available to those 18 and above.

“Fae is concerned ‘the asking of questions about alarmist scenarios that no-one is advocating is clearly designed to shape opinion on the broader issue rather than contribute to meaningful debate’.”

I Screamed for About a Minute!’: Lesbian Couples Finally Have Equal Access to NHS IVF (Rachel Moss, HuffPost)

DHS Challenge Coins Say ‘Border Patrol Lives Matter’ (Joseph Cox, Vice) [US]
[CN: racism]
From the article: “A series of challenge coins made to commemorate the Portland protests in 2020 for federal law enforcement contain phrases such as “Border Patrol Lives Matter” and a fist that resembles one often used with the Black Lives Matter movement. Another coin includes the helmet of a Star Wars Stormtrooper surrounded by the emblems of various agencies, including multiple parts of the Department of Homeland Security, according to photos of the coins posted in private Facebook Groups and then shared with Motherboard.”

Warning racism in police has been ‘taken out of canteens and put on WhatsApp’ (Lizzie Dearden, Independent)

The Darkest Part of the Night at the Kiln review: Zodwa Nyoni’s play about autism is uneven but affecting (Nick Curtis, Evening Standard)

To disclose, or not to disclose… a personal autism journey (Claire O’Connor)

Climate change: How to talk to a denier (Merlyn Thomas and Marco Silva, BBC News)

This week’s links were sourced and compiled by Holly, with thanks to Alessia for recommending Girls on Tops and Polyester Zine. I will be checking them out on my travels from here!

The image is from rawpixel.com and is licensed under a CC0 Public Domain Dedication, which is free for personal and commercial use.

We welcome discussion on our social media pages or via the comment form near the bottom of this page: if you scroll past ‘Related posts’, you’ll find the comment box below ‘Leave a reply’.

However, any abusive comments – including those containing ageist, anti-sex-worker, classist, disablist, fatphobic, homophobic, racist, sexist or transphobic language – will be left unpublished (or result in deletion or blocking, in the case of social media).