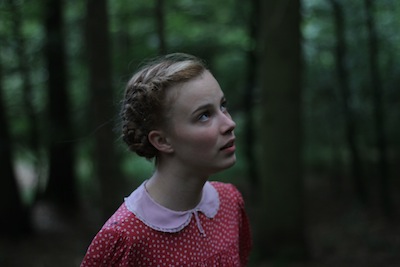 In her parents’ shadow

It is the spring of 1945 in Germany and Hitler’s empire is crumbling. In the suspense of the weeks preceding the Führer’s suicide, it is difficult to imagine the end of war and the Allies’ victory, especially if you are a high-ranking SS officer – or his 15-year-old daughter Lore, brought up in the Nazi ideology and suddenly promoted to being the head of the family as her parents surrender to the new administration.

Australian director Cate Shortland’s second feature (after critically acclaimed 2004 Somersault) is shot entirely in German (bar US soldiers’ dialogues with the natives) and with an all-German cast, although Shortland’s command of the language is limited. Thanks to this brave decision, the film is compelling in its flavour and was appreciated by the audience of Locarno Film Festival 2012, winning the Prix du Public.

Lore’s family is a Täterfamilie (“the family of perpetrators”), consisting of Nazi parents and five children, of whom she is the eldest. After burning most of the incriminatory evidence of folders and photo albums, shooting the family dog dead and relocating the family to the country house in the Black Forest in the south of Germany, the parents leave to meet their punishment.

Lore, whose youngest brother Peter is still a suckling, is entrusted the task of delivering the kids to Omi’s (grandmother’s) house in Hamburg, which happens to be on the other side of the country. “Take a train,” urges Mutti, handing over money and jewellery that can be exchanged for food and favours. But trains do not run as the entire country sinks into chaos, exacerbated by the US army widely distributing photos from liberated concentration camps: “those terrible pictures” in which piles of dead bodies bear witness to such unthinkable horror that many believe them to be mere US propaganda. 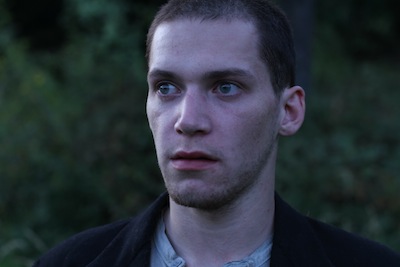 The children embark on a dangerous journey through anarchy of fires and rapes, passing abandoned houses and scattered dead bodies. Depending on the kindness of strangers, they quickly learn that some die-hard National Socialists’ sympathisers can be more dangerous than the farmers who wouldn’t help them knowing they are “Nazi children”. In a stroke of luck, they meet their unlikely guardian angel, a shaved-headed boy with Jewish papers who joins the team to become their protector. After many dramatic twists of action, the protagonists reach their destination in an almost entirely happy ending of their trials.

Saskia Rosendahl as Lore brilliantly conveys the complexity of exploring the war guilt through the eyes of the innocent: not victims but the children of perpetrators

Adam Arkapaw’s cinematography creates a highly stylized aesthetics by using many close-ups and slow motion takes, alternating the images of death and carnage with these of peaceful German countryside. Employed perhaps to highlight the precariousness of the post-war scene and to break down terror to digestible fragments, these devices tend to blunt the edges of harsh reality and sometimes bring the message home too crudely. What the camera does bring out excellently is the towering presence of Lore, obviously vulnerable as a young girl in the middle of the land with no rules and yet strong, bordering on authoritarian.

The characters’ motivations are unconvincing at times and the screenplay has several weak points. Is Thomas who he says he is and why is he actually helping Lore and her siblings, who are at worst offspring of his oppressors and at best an unnecessary burden adding to his difficult situation? Is the point of the scene with US soldiers to show their misogyny as they don’t understand a word of Lore’s German but then comprehend all, again in German, uttered by Thomas? 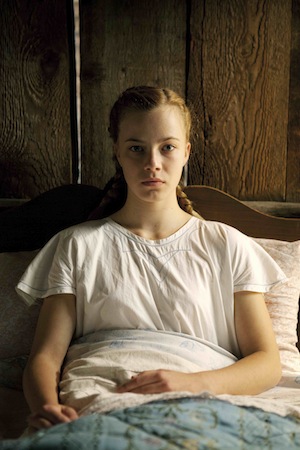 The success of the film hinges on the young actors’ performances, especially that by 19-year-old Saskia Rosendahl as Lore (left), which has already won her Stockholm Film Festival’s best actress prize. She brilliantly conveys the complexity of exploring the war guilt through the eyes of the innocent: not victims but the children of perpetrators. Young and potentially vulnerable, Lore is unapologetic: she needs all her strength to protect herself and her siblings and she is prepared to go far to achieve it. Watching this “Aryan goddess”, with her serious, clear blue eyes and crown of blonde hair, it is impossible to forget that her strength is rooted in the toxic ideology she was fed throughout her life.

The crimes committed by her parents and their associates are obviously not her fault. Yet she can’t help smirking at Thomas and forbidding him to touch her siblings after she discovers he is Jewish. She understands that her little brother needs to eat and that breast milk is best for him; still, she can’t stop the revealing of her disgust with a tatty woman who agrees to nurse him and she proceeds to tell her, in a rather patronising way, to “clean herself”.

The film is based on one of three novellas included in The Dark Room, 2001 Booker-shortlisted novel by Rachel Seiffert, a British writer of mixed German-Australian heritage. Shortland explains how meeting Seiffert’s mother, the woman on whom Lore is based, helped her make emotional sense of the character: “The thing that strikes me about them [Seiffert’s mother and aunt] is that they still carry this enormous burden: the crimes that were committed were not their crimes, but it’s their blood. How do you live with that? How do you equate that with somebody that you really love?”

Towards the end of the film, enraged Lore smashes a substantial collection of porcelain figurines in a teenage protest against her grandma’s unrelenting loyalty to the old regime’s mores. The ending is open enough, however, to have us guessing how she will live with her burden. The record of her accelerated coming of age is well worth seeing as the film opens nationwide on 22 February.

All pictures are stills from the film, showing Saskia Rosendhal as Lore (pictures 1 and 3) and Kai Malina as Thomas (picture 2). Used with permission.

Ania is The F-Word’s film editor. She admired the distinctive Germanness of the film made by Australian director.