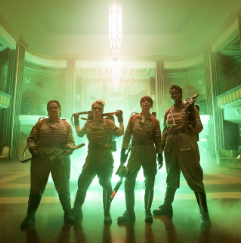 Shutting down the Ghostbusters hate: three films to remake with men

This is a guest post by Chelsey Lang, a writer and content marketer from Southampton, passionate about tech, fashion, feminism, and the Oxford comma. Tired of always being That One Feminist Friend, she took to the internet, where she occasionally takes time out from watching cat videos to write about feminism and pop culture, most recently for Fanny Pack

Whether you’ve seen it or not, it’s likely you’ve heard all about the new Ghostbusters film. It’s Ghostbusters…. but with women?!

Much in the same way certain areas of the internet were outraged over the newest Star Wars movie featuring both a female lead and a black man as a stormtrooper, there was an outcry over this sequel/reboot of the 1980s classic: “How dare they remake a classic film like that, with women now playing the main roles? Feminist agenda! Political correctness gone mad!”

For the record, despite the apparent sacrilege of an all-female Ghostbusters, the film has opened to both box office and critical success.

One of the arguments thrown about multiple times during protests was that a reboot with changed genders was wrong because it would never happen the other way around. You’d never see them remaking a female-led movie with male leads, right?

(Right. Maybe. But let’s face it, all other implications aside, they’d be limited in choice. Just 12% of protagonists in Hollywood films are women, and only 30% of speaking roles go to women.)

All of this horror culminated in this truly inspirational Tumblr post by vistakai:

People keep saying, “what if men did what you did to ghostbusters but the other way around!!!!!” but 1) You can’t. There isn’t one major blockbuster from the past 30 years with enough girls to do that with, and 2) Don’t assume that I wouldn’t completely support an all male cheetah girls reboot. And so, for all the Ghostbusters haters, here you go: Three movies that should get the “reverse-Ghostbusters” treatment.

Take three incredibly attractive, athletic men and make them complete excitingly dangerous missions in increasingly impractical outfits. Let’s nominate Chris Evans, Channing Tatum and Godfrey Gao as our angels. Their missions require a lot of undercover work, of course. They need to pose as strippers, probably, maybe firefighters. There are a lot of uniforms involved.

They’re led by a mysterious woman whose face we never see. Let’s say Tilda Swinton is our ‘Charlie’: there’s a woman who could inspire men to risk their lives on a daily basis for her!

We know that Brad Pitt and Edward Norton can do the mindfuck thing. Fight Club is a masterclass in how to portray a slow slide away from reality – as is Black Swan.

Let’s bring the two actors back. Only this time, we’d actually get the sex scene that Fight Club so inexplicably denied the world.

Coyote Ugly is the story of a wannabe songwriter who ends up working at a bar where there’s just as much dirty dancing as there is drink serving. Friendships are made. Revelations are had. There’s a nice background relationship.

You could argue that, in a way, we already have this. Replace “bar” with “strip club” and you have something close to Magic Mike.

But why stop there? Magic Mike, while an enjoyable film, isn’t particularly renowned for its plot. Coyote Ugly, while not necessarily groundbreaking in its writing either, does bring the viewer a wider variety of relationships, as well as the conflict of a father-daughter relationship under the combined strain of a daughter moving away and a father with health problems.
In this case, both films could learn from each other. Specifically, though, that sexy dancing and emotional fulfillment aren’t mutually exclusive.

All those movies where a woman struggles to “have it all”

A career and a relationship? Wait, and a family? All together? At the same time?
Not if you’re a woman! There are countless films out there where the conflict revolves around the lead female character trying to juggle her work (always demanding), her husband (generally useless) and her kids (nightmares).

By this point it’s practically a genre in itself, with titles like I Don’t Know How She Does It built entirely on the premise that she shouldn’t do it, because that’s not the rightful order of things.

Not so for the male characters. Where’s I Don’t Know How He Does It, where our stylish leading man is balancing a career and a family, with the implication that at some point he’ll have to pick between the two? Come on, men. Stop tricking yourselves into believing you can have it all.

So there you go, Ghostbusters naysayers. There are some you can have for free.

Picture of Tilda Swinton by Annalisa Flori/Getty Images.
Tilda Swinton attends the Villa Laguna during the 72nd Venice Film Festival at Hotel Villa Laguna on September 7, 2015 in Venice, Italy. She has short blonde hair, sunglasses and is wearing an oversized offwhite suit jacket, her mouth is ajar. There are some people in the background.