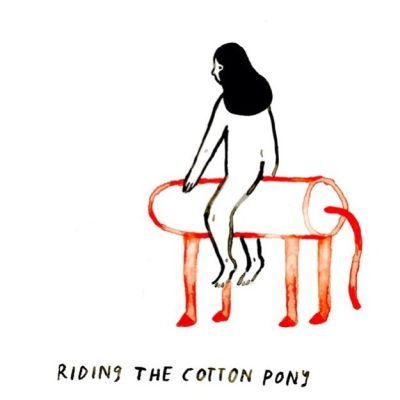 This is a guest post by Sarah Hewett, a young female entrepreneur who talks a lot about tampons and wants to create a more sustainable society. She tweets about periods, gender, the environment and sustainable products at @MonthliesUK.

Eighteen months ago, I became a tamponpreneur. I’d been menstruating myself for about 12 years by that point and I considered myself a pretty keen feminist, so I didn’t expect to learn too much new stuff about surfing the crimson wave. I was so wrong – there is loads to learn at Period School.

An easy one to start: periods come from the vagina. You cannot ‘hold them’ like pee. We all know this, but this young meninist didn’t.

Vulva and vagina get mixed up a lot in conversation – people often mean ‘vulva’ but say ‘vagina’. The vulva is the external female genitalia, so the labia minora, labia majora, clitoris, clitoral hood, urethra and the vagina. The Vagina Dispatches episode 1 takes a giant vulva on tour to see what people really know.

The stuff that comes out in your period is only about half blood. The other half is cells from the lining of the uterus mixed up in cervical mucus. Nice.

Periods can come in all sorts of flows and colours but many people don’t know the signs of an unhealthy period. This little guide will help you to be sure.

From ‘shark week’ to ‘riding the cotton pony’, there are countless euphemisms for periods from around the world. These are some of my favourites:

Denmark: The communists are in the fun house

In the olden days, women would probably have had fewer periods in total, as they would have been pregnant and breastfeeding for more of their lives, and poor diet for most would have meant a later start to periods.

Tampons were first patented (by a man) in 1929, but women had been using make-shift devices since at least the Ancient Egyptian times (papyrus wodge anyone?). In a pack of major brand menstrual pads, there is the same weight of plastic as four carrier bags. That means the UK has a carbon footprint of 80,000 tonnes of CO2 annually just from sanitary pads.

There are great alternatives out there, from reusable menstrual cups and washable pads to organic, biodegradable options which leave a softer footprint on the earth.

In rural parts of Nepal, menstruating women are considered unclean and not allowed to prepare food or touch male relatives, and in some communities are forced to sleep outside.

In Japan, women are not permitted to be sushi chefs in top restaurants because it is believed that menstruation causes their sense of taste to become unbalanced resulting in a bad tuna roll.

AfriPads are a great charity based in Uganda, who employ local women to produce and sell reusable pads, making it easier for girls to stay in school during their period.

Back in January 2015, Heather Watson put her defeat in the Australian Open down to “girl things” and we all realized how unusual it was to hear athletes talking about periods.

This summer, Olympian Fu Yuanhui from the Chinese swimming team became a menstrual hero when she told us her period had started the day before the relay final in which China placed 4th and she felt she’d let her team down because of it.

While lots of people recommend exercise to take the edge off cramps, many menstruators prefer a different type of exercise (spoiler: it’s sex). Orgasms are thought to interrupt the muscular spasms which cause period pain.

Over 40 countries (at least) still have a tax on menstrual products, including 41 states in the US. Proof that the patriarchy lives on in political systems around the world (as if we needed reminding!).

The UK ‘luxury’ tax on menstrual products (including re-usable ones) sits at 5%. This was hotly discussed in Parliament last October, when Stella Creasy refused to continue a debate with Bill Cash until he stopped calling menstrual supplies “these items” and used the word ‘tampon’.

George Osborne got an agreement in principle from the EU that the tampon tax could be scrapped but it has yet to become clear when that will happen.

For decades, big brands have been selling pads and tampons by way of clear blue liquid and women horse riding in white dresses. We cheered when Bodyform finally showed some blood earlier this year.

The more I learn at Period School, the more I realise how much shame, embarrassment, confusion, misinformation and misogyny surround menstruation. I don’t look forward to the communists visiting my fun house each month, but we need to be able to talk openly about periods (and get men talking about them too), to recognise health problems, raise body-confident daughters and replace the secrecy with education.

Image at top of blog shows illustration of naked woman riding a large tampon with legs, as if it were a pony, and is courtesy of Layla Ehsan
Image accompanying Environmental Studies lesson is of a menstrual cup and is courtesy menstruationstasse.net on Flickr