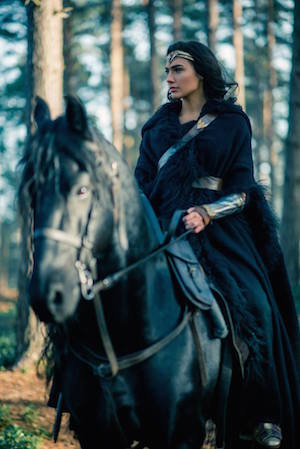 No man’s land belongs to women

First weekend of June saw the biggest and most profitable opening of any women-helmed superhero film yet. Directed by Patty Jenkins and starring Gal Gadot as the titular character, Wonder Woman has quite literally taken the world by storm. Well, we have been waiting long enough. Diana, princess of Themyscira, daughter of Hippolyta has finally come to the big screen. Wonder Woman narrates Diana’s role in helping to bring First World War to an end, whilst also serving as her origin story. Unlike many superheroes’ before her, Diana’s childhood was a happy one – growing up in an all female society made up of the Amazons on paradise island Themyscira. In the opening scene, we see a young Diana being doted upon by the women of the island as she runs to watch the Amazonian warriors training. Diana grows to be a confident woman, no doubt influenced hugely by the society she grew up in, of women who were not only told they could do anything, but actually did do everything. Her aunt (Robin Wright in a small but impressionable role) pushes Diana to become the best warrior she can be, whilst her mother teaches her the story of Ares, the god of war, and how one day he will return to Earth.

Several years later, American spy Steve Trevor (Chris Pine) washes up on their shores followed by scores of Germans trying to kill him. Thermyscira, created by the Greek gods, is rendered invisible to the rest of the world but Steve is chased right through the barrier between the worlds onto their shores. Once the Amazons have defeated the Nazis, he informs them of “the great war” raging beyond their island. Diana recognises it as the work of Ares and decides she must do everything in her power to help “those who can’t defend themselves”.

When Diana leaves Themyscira to try to end the war, she retains the confidence of her childhood. This, coupled with her ignorance about early 20th century Europe, makes her an incredibly likeable character. She is constantly baffled by the restrictive clothing that women were expected to wear and is confused as to why she cannot enter a government meeting with Steve. These conditions placed on her due to her gender are unimaginable to someone brought up outside of the patriarchy.

As I left the cinema, I had only one thought – I need to watch this again

Diana’s judgement and opinions are undermined constantly throughout Wonder Woman. Sound familiar? Despite having just seen Diana save an entire town and take a sniper out in the most impressive way possible, Steve still refuses to believe that she might not be completely human. He supports her, yet audibly doubts that she is an Amazon or that Ares is behind this war. Diana is stronger, more skilled and a better fighter than Steve, yet he constantly establishes himself as her protector by telling her what to do or holding her back from the fighting. Frustrated, Diana decides she must do what she has set out to do – which means fighting alone.

Of course, Gadot and Pine have wonderful chemistry in these scenes, keeping them comic rather than advocating Steve’s subtle misogyny. Jenkins knows how to play the two characters off against each other both with witty one-liners and surprisingly tender moments. In one of the most visually striking scenes, Diana decides to cross no man’s land to curb the fighting. Before she goes over the top, Steve shouts her down: “It’s no man’s land. No man can cross it.” Ah, but Diana is no man! In a slow motion sequence that will surely make executive producer Zack Snyder proud, Diana deflects oncoming gunfire left, right and centre. Using her wrist cuffs and shields, she takes the fire to allow the men to move forward around her. Essentially, she protects them. The dark deserted wasteland between the trenches is a familiar scene in cinema and television—especially for Brits, I think—but to contrast that horror with Diana’s iconic blue and red outfit shows exactly why she is capable of saving this world. She is different from her surroundings and different to the world of men.

The end of the world seems ever more imminent nowadays. With terrorist attacks becoming more frequent, the tragedies occurring in Syria and pretty much everything Donald Trump is doing, it feels like we need Wonder Woman now more than ever. On hearing the plight of innocent civilians affected by the “war to end all wars”, Diana makes an unthinkable choice. She leaves the only life she has ever known – in what essentially is a paradise haven – to put herself on the frontline of a war that has nothing to do with her. Out of sheer compassion and a sense of duty, she takes it upon herself to save the world.

To see Diana in full action-mode, complete with sword and spear, attempting to unify the world with love was enough to bring tears to my eyes on several occasions. As I left the cinema, I had only one thought – I need to watch this again. In a very real sense, Diana is fighting patriarchal norms and ideas of aggressive masculinity in order to put an end to the war. She believes that Ares, the god of war, is behind everything and that the soldiers, generals and army leaders are all under his spell.

Where Ares seeks destruction and warfare, traditional signifiers of toxic masculinity, Diana tries to save the world with traditionally feminine attributes. She is not scared to be emotional; in fact, it’s her overwhelming feelings of empathy that drive her to save the world. Arguably, this is a bit reductive (masculinity = bad, femininity = good) but I feel that mainstream films are hugely lacking in their representation of heroic femininity. Too often we are given “strong female characters” who are not allowed to be emotional lest they be seen as ‘feminine’. Ripley in the Alien franchise, Sarah Connor from Terminator, even Furiosa in Mad Max:Fury Road suffers from this impenetrable “strength”. Diana is feminine and she kicks ass.

Jenkins utilises slow-motion camera throughout the fight scenes, showing off Diana’s strength and skill. Rather than the objectifying close-ups of women that we have come to expect from action films (Michael Bay, looking at you), Jenkins ensures that Diana is in charge of the frame at all times. The beach fight scene between the Amazons and the Germans is a prime example of this as we are left in awe of the Amazons’ tactics and skill, pausing in places to admire their stunt work and accuracy with a bow and arrow. Most importantly, they are not sexualised.

Why is the possibility of future women-helmed superhero films hinging on whether Wonder Woman succeeds or not?

Of course, Wonder Woman is not without flaws. The storyline is perhaps a little too simple: while it remains true to structure of a superhero movie (origin story, conflict, introspection, save the world), I would also have liked to see a few more twists and turns to get there. There are some really reductive ideas about First World War, especially in painting the conflict as UK vs Germany. This a fictionalised take on First World War, but there is no attempt to explain how the war came about or that there are innocent people being killed on both sides. As great as the no man’s land sequence is, Diana is still helping to kill thousands of innocent Germans who wanted no part in the war either. There’s also a peculiar array of accents throughout, from the Amazons to the Germans. It’s very unclear where Thermyscira is located geographically, and the generic Eastern European accent (bordering on bad Russian) doesn’t help at all.

Despite this, Wonder Woman has already been cemented as an important film of our time. It’s about time, too. Patty Jenkins is the first woman to direct a major superhero film but Wonder Woman shouldn’t have to be the greatest film ever made to justify more women being given directorial roles. I think we can all agree that Batman v Superman (directed by Zack Snyder) was one of the worst films that has ever been made, yet no-one is writing off all male directors because of its failure. Why can’t we extend that privilege to women too? Why is the possibility of future women-helmed superhero films hinging on whether Wonder Woman succeeds or not? Why are we still having this conversation? [Editor’s note: Gina Prince-Bythewood is set to be be the first African-American woman to direct a studio-produced superhero film]

Wonder Woman not only fulfils all the criteria of a superhero movie but is also engaging, exciting and inspiring throughout. I believe it will sit high on the shelf of DC universe films for many years to come. We have been introduced to a wonderful, interesting character, we’ve seen what she can do and I, for one, am ready for more!

Wonder Woman is in cinemas now.

1. A white dark haired woman looks into the camera while reaching for a sword on her back. Her hair is long and she’s wearing a metal head band with a star on her forehead and other pieces of armour are visible on her forearms. It’s Gal Gadot as Wonder Woman.

2. A white dark haired woman wearing a long black cloak is sitting on a black horse in the woods. She has a metal head band with a star on her forehead and is looking to the left. It’s Gal Gadot as Wonder Woman.