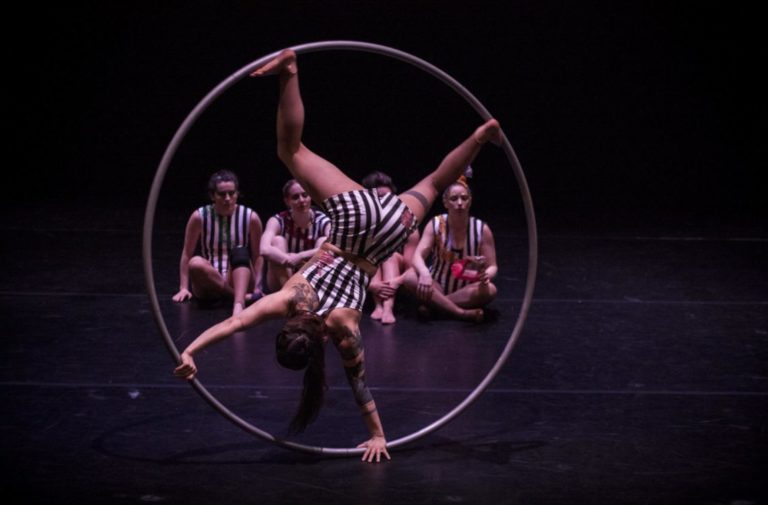 The 2017 Edinburgh Festival Fringe is now over, so this is our final set of reviews for this year. You can read the rest of our 2017 coverage in parts one, two, three, four and five. Not I, a monologue spoken by a character referred to only as Mouth, is widely considered one of Beckett’s most challenging works. In this moving and important staging of this iconic text, performer Jess Thom frames Mouth as a disabled character placed on the outskirts by a society unable to embrace her neurodiversity. She is joined onstage by the expressive Charmaine Wombwell, who takes on the joint role of The Auditor – a character named in the text – and the performance’s BSL interpreter. Thom hovers over the audience in her wheelchair, wearing a customised light that allows her own mouth to appear isolated. Thom’s Mouth is unquestionably otherworldly but speaks to us with a sense of clarity and grounded self-awareness that contrasts with her unnatural height. The resulting interpretation gives Mouth a sense of humanity and accessibility that both highlights her otherness as a disabled woman and reminds the audience that she is indeed not that different from each of us.

All performances of Not I are ‘Relaxed Performances‘ and include the monologue, along with a short film by Matthew Poutney on the making of the production and an audience Q&A. In Thom’s very capable hands, the Q&A succeeds not only at opening a dialogue about the impact of Beckett’s play, but also invites audience members to heighten their own awareness of their surrounding community and interrogate what might be achieved by framing Mouth’s seclusion as a result of pervasive social norms and stigmas rather than her own ‘madness’ – that is by considering the piece through the lens of the social model of disability . What this outstanding performance unquestionably achieves is an entirely new interpretation of Beckett’s work, which achieves significant social and political impact as a radical performance intervention as well as aesthetic excellence. This show is personal and political with a giant P and I love it. Katy Baird greets the audiences from the stage in a glittery show-woman outfit, singing ‘Proud Mary’, a song that is partly about leaving a job. This is a clever introduction to a piece that questions the nature of work and what is valued in society, as well as addressing class and the audience’s income levels, while feeding us chips and beer to boot.

Baird simply recounts all the categories of work she has done. These are grouped into ‘food’, ‘booze’, ‘drugs’, ‘sex’ and ‘office’. We watch several Burger King training videos in which employees are told how to be empathetic with customers (who may have just found out they have cancer or are celebrating their wedding anniversary with a burger) and to not see them as commodities but connect with the humans underneath – a very funny and cynical window into sales speak. Baird contrasts this with stories of real life friendships formed when working in the fast food industry, nice managers who let staff eat as much as they want and ritualistic smearing in ketchup. Baird has also worked as a drug dealer and an online sex worker, finding that neither were without their pitfalls.

Workshy cleverly blurs the boundaries between performance and lived experience, including the arrival of a takeaway mid show (thanks for the chips!). One of the strongest shows I’ve seen at the Fringe this year.

No Show deconstructs aspects of contemporary circus practice from a maker and feminist perspective and also works as a full-length piece of entertainment. The performers enter in showgirl mode and then go on to reveal some of the harsher realities of the circus world.

I’m less keen on the part that dissects tricks as it comes across like a bad street show where people explain what they are doing before doing it. However other parts are very powerful, especially Alice Gilmartin’s repeated attempts to speak on stage, which are thwarted by her fellow performers as they force her to do impressive tricks. As a former circus practitioner I can empathise with how the skills of a circus artist often overshadow their personal expression and how that can be reductive and frustrating.

Kate McWilliam recounts how she was asked only to perform the splits and smile on a popular television show while male performers were able to show off their best tricks and power tumbling – a telling and powerful reminder of how gender representation manipulates our perception of what women are capable of. This section is punctuated by McWilliam performing the ‘boy’ tricks, clearly showing that she is capable of them too.

No Show is a clever piece of contemporary circus that asks important questions while simultaneously allowing the audience to enjoy the skills the performers bring on stage, culminating in a fantastic hair hanging finale.

The feature image is of No Show by Chris Reynolds. It shows a performer in a Cyr wheel. She is upside down and has her back to us. Behind her, four other performers are sitting at the back of the stage. From our viewpoint they are all contained within the circle of the Cyr wheel.

Image one is of Jess Thom by James Lyndsay. The image is almost completely in darkness. Only the bottom half of Thom’s face can be seen within the hood of her zip-up top. Her mouth is wide open.

Image two is of Katy Baird in Workshy. Baird leans her elbows on a white table. She wears only a baseball cap. She is covered in fast food – a messy pile of burgers rests on her chest with other burgers trapped between her arms and breasts and there are chicken nuggets across the table in front of her.

Image three is of No Show by Chris Hoyle. Five performers are spread out across the stage. Each wears a black and white striped showgirl costume, either a leotard or shorts and a top. Each one strikes a circus pose including one performing a handstand and one touching her toes.