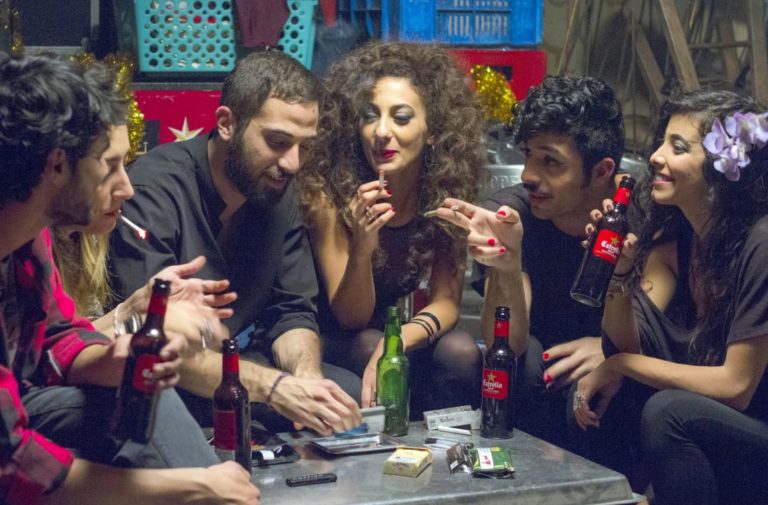 In Between, the first feature film from Arab-Israeli director Maysaloun Hamoud, has simultaneously earned her the prestigious Young Talents award at this year’s Cannes Film Festival and a Palestinian fatwa, an Islamic ruling determining that the film was sinful. In interviews the director is nonchalant about her fatwa, downplaying the seriousness of the death threats received by her and the actors and, with fighting talk, declares it to be another marker of artistic success. Interviewed by Alex Ritman for The Hollywood Reporter, she confirms that it was one of the film’s purposes “to shake the system”.

Indeed, the film is both frank and joyful in its attempt to tackle cultural and sexual taboos faced by Arab women living in the Israeli city of Tel Aviv. The film focuses on the members of an artistic community from Tel Aviv’s southernmost part, Jaffa. These young Palestinians experience life through a complicated set of contradictions: as Arabs in a Jewish state, as women in a patriarchal society, as queer people in heteronormative communities and as communists in a modern capitalist economy. The film does not deal explicitly with the Israel-Palestine conflict, since the characters all hail from different parts of Israel and now live in Jaffa, but it illuminates internal segregations within Israeli society and focuses on pressures experienced by the three women leads who live together.

The first scenes introduce us to defence solicitor Leila (Mouna Hawa), who graces Tel Aviv nights dressed like Catherine Deneuve in The Hunger (1983), her chin held high as she gazes down on the mortals around her, uttering dismissals to presumptive men in French and English. She lives with the rebellious DJ Salma (Sana Jammelieh), a communist who moves from one unsatisfying service job to another in order to support her musical ambitions. Salma falls in love with another young woman, a trainee doctor, unbeknownst to her traditional Christian family.

We also meet their new flatmate Nour (Shaden Kanboura), a computer science student from a traditional family, who in the shared flat replaces Salma and Leila’s just-married friend Rafif. Nour is engaged to a man who decides she should be a teacher when she graduates, despite other potential opportunities that a degree in computer science could open to her in the modern tech economy of Tel Aviv, known as “Silicon Wadi”. Her fiancé deeply resents the effect he perceives that living with two more emancipated women has on Nour, and the crux of the film is an act of sexual violence he perpetrates just as he feels she is slipping away from him, attempting to claim her as his own in the last ditch attempt of a dictator who senses his power diminishing.

Hamoud emphasises the idea that clothing and grooming – both Western and conservative – always function as drag and performance. The film opens with an homage to Nadine Labaki’s great Lebanese film Caramel (2007), with a woman (we later realise it’s Rafif) being told conspiratorially by a beautician waxing her legs how to perform femininity and feign innocence in bed on her wedding night. Later in the film, Leila uses Nour’s veil to successfully deceive and blackmail an attacker who is simple-minded enough to think that clothing is sufficient to determine a woman’s intentions and code of honour.

The film, jointly financed by French and Israeli money, is to a certain extent a loving portrait of the liberating metropolis: a noisy, vibrant, industrious place, with opening opportunities for creativity, intoxication and personal emancipation. Yet Hamoud is careful not to allow the film to descend into Orientalist clichés about the liberalising effect of Western influences. It is Nour’s ‘traditional’ father who ultimately protects her from her wealthier, apparently ‘modern’ and respectable fiancé.

We witness how the women are gently but firmly excluded from fully participating in mainstream Israeli society. Salma, banned from speaking Arabic in the kitchens where she works so as not to disturb customers, quits in protest

The galvanising soundtrack for the film was composed by young Palestinian musicians gathered in musical collectives in Tel Aviv, such as the Jazar Crew whose mission statement is to “emancipate [themselves] from the conflict and forge a new collective identity through mostly electronic music”. However, this creative removal from the reality of the conflict appears to be optimism speaking. In the film itself there are subtle hints of the war around the borders – Salma the communist wears a scarf checkered with the Palestinian flag and we see partygoers questioning the veracity of news broadcasts about terror attacks.

We also witness how the women are gently but firmly excluded from fully participating in mainstream Israeli society. Salma, banned from speaking Arabic in the kitchen where she works so as not to disturb (Jewish Israeli) customers, quits in protest. Another moment playfully evokes an iconic scene from Pretty Woman (1990), where garishly dressed Leila, curly hair abounding, is given a raised eyebrow by the shop assistant before being allowed to try on clothes in a high-end boutique. Being cast as “whores” (a pejorative term frequently employed by Salma’s fiancé) is a constant risk and their ethnic background often disqualifies them from making marriages within conservative Israeli-Jewish society, as Layla points out to an amorous Jewish colleague, identifying him as the type ultimately preferring a “kosher” wife. However, the women’s independence also makes them too free to be ‘acceptable’ brides within the conservative Palestinian communities where they were raised.

A key illustration of this is when Salma chooses to bring her new girlfriend Dounia (Ahlam Canaan) to visit her respectable Christian family, just as they are lining up potential husbands as dinner dates. Hamoud’s visual symbolism is subtle and beautiful, helping the film gently allude to taboo sexuality: the first suitor, a chicken farmer, clumsily fumbles with a grapefruit to underline the seriousness of his marriage proposal, offering it to Salma all bruised and dripping, whilst she is barely able to conceal the disdain on her face. During another visit, Dounia performs the same act at the end of the family meal, peeling and offering the grapefruit deftly; an offer which Salma happily accepts.

Constantly the object of romantic and sexual attentions by both Palestinian and Jewish colleagues, Leila thinks she has found real love in Ziad (Mahmoud Shalaby), a film producer from a liberal family, who is attracted to her wildness, her style, her dancing and the prestigious legal career that makes her independent. Yet Ziad eventually disappoints Leila, wanting to keep their relationship going whilst resisting introducing her to his family and therefore not seeing her as fit to marry unless she reforms herself by quitting smoking, drinking and going out at night. It turns out that his liberalism is only a temporary facade, with his gender allowing him to enjoy a prolonged, indulgent youth without damaging his reputation. “This is not Europe”, he reminds Leila, despite how much she might want it to be, pointing out that the would-be Deneuve should not expect the same treatment as a European woman.

Leila refuses to accept Ziad’s assessment of her reality and tells him to leave. Rejecting his double standards and the mistress status he affords her, her very movements defy his assertion that her emancipation can only exist elsewhere. Whilst Salma decides to leave her family and pursue her musical dreams in Berlin, Nour chooses to remain with Layla in the metropolis. Surrounded by their friends and allies, the women keep dancing.

In Between is screening in selected UK cinemas now.

It will also be showing on Saturday 14 October as part of the Iris Prize Festival, the world’s largest prize for LGBT+ short films. You can read the organisers’ blog for us here.

All pictures courtesy of Peccadillo Pictures. Photo by Yaniv Berman.

Image descriptions:
Feature image: Party-dressed people sitting around a table in a bar or at the party, with drinks and cigarettes on the table. Leila is in the middle, wearing bright red lipstick, with her hair down, she’s smoking.

This post was amended on Wednesday 27 September to include the info about the Iris Prize’s screening of the film in Cardiff and to change inaccurate details regarding Nour’s and Rafif’s characters.