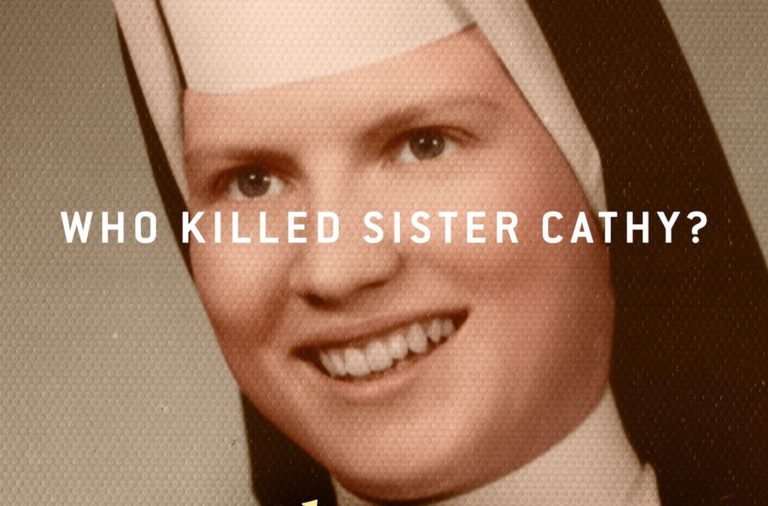 Content note: this article contains murder, non-explicit discussion of child sexual abuse within the Catholic Church, spiritual abuse and apologism for that abuse. Contains some spoilers for The Keepers.

The Keepers is an extraordinary documentary series on Netflix about the unsolved murder of a Baltimore nun, Sister Cathy Cesnik back in 1969. Cesnik was working as a school teacher at the time of her death and such was her popularity that in the present day, two of her former pupils – women now in their 60s – are conducting their own investigation to try and establish exactly what happened to their teacher.

Fairly early on in the series, we learn the likely reason why Cesnik was killed and the name of the person who almost certainly initiated her murder. The nun was working at a Catholic girls school where she became aware that the school chaplain and counsellor, Father Joseph Maskell, was sexually abusing a number of her pupils. Cesnik complained about this, was transferred to another school and it would appear that while trying to take the matter further, she was silenced.

Had this been a documentary series about the sexual and spiritual abuse of children by members of the Catholic Church, I would not have had the stomach to watch all seven hour-long episodes. However, The Keepers manages to tell the viewers an awful lot about this abuse, attempts within the Catholic Church and other institutions to cover it up and the continued resistance against exposure, while framing it around a genuine mystery; can Maskell’s involvement in Cathy Cesnik’s murder be finally proven? Who else was involved? What exactly happened to her?

Too often, our culture reduces victims to their victimhood

There are other major differences between The Keepers and the other ‘true crime’ documentaries I have seen in the way that both the murder and the abuse are handled narratively, visually and even in terms of incidental music (it’s very sparing and never tells you how to feel). We hear about the abuse entirely in the voices of the people who experienced it, who happen to be extremely articulate and eloquent in describing crimes committed against them. We hear not only what Father Maskell and others did to these children, but have this placed in the context of their lives both as young girls and the adult lives they went on to live. The only dramatisation comes in fairly abstract black and white footage, mostly of school corridors and office furniture. There are no lingering shots of tearful faces; at one point, I even noticed the camera respectfully pan out when one of the witnesses began to cry. Too often, our culture reduces victims to their victimhood. During campaigns to (quite rightly) divert focus from famous or well-respected men who have murdered women to the women they have killed, such as #hernamewasReeva or #hernamewasClodagh, I have always been concerned that there’s a risk of rendering a woman’s name synonymous with a fate which she had no control over, hopefully only experienced very briefly and which she had no chance to respond to and recover from. Murder victims in ‘true crime’ stories are usually just that – as Ailsa Bristow wrote last year, in Netflix’s Making a Murderer, the life and character of murder victim Teresa Halbach became something of a footnote.

Meanwhile, throughout both factual and fictional work within our culture, dead bodies – especially those of young women – are too often reduced to criminal exhibits in a murder scene. US documentaries seem particularly eager to show us graphic pictures of corpses, body parts and blood.

The Keepers defies these trends. Photographs of where Sister Cathy’s dead body was discovered feature a respectful blur over where the corpse lay and the only explicit image we are ever shown is an image of her skull, as a pathologist explains how the very large hole in it might have been created.

We get to know Sister Cathy as well as we possibly could at this distance, what kind of woman she was and the overwhelmingly positive effect she had on those who knew her. The makers of The Keepers made the extraordinary and admirable decision that the main characters in this murder mystery are not the suspects, but Sister Cathy and her former pupils.

A commonplace reduction of victim’s lives applies to victims of non-fatal violence like child sexual abuse. One reason people struggle to report abuse of any kind is that to identify as a victim comes with a terrific cost, even when one is believed. Programmes such as Louis Theroux: Savile manage to speak to some victims of prolific sexual-abuser Jimmy Savile but nevertheless centred the story on both Savile himself as well as Theroux and the uncomfortable but non-abusive relationship these two men shared.

At the cost of pacing which some viewers may lose patience with (the first episode is the slowest), The Keepers humanises all the principle living characters, especially the two investigators and the two survivors of Father Maskell who had first come forward about the abuse. We see these women baking or painting, we see them in their various family roles and we see the colossal strength they have as well as the acknowledgement of everything they have lost, not only because something terrible was done to them, but because so many people in various positions of power have worked very hard to try to make these survivors shut up and go away.

I have tremendous respect for the programme-makers’ decision not to treat Father Maskell like the main character or even as an especially interesting character. Too often, throughout our entire culture, violent men are treated as if they are deeply fascinating evil geniuses and programmes like this would usually delve into this man’s past, maybe explore his relationship with his mother or speculate about a clinical diagnosis which might purport to explain his actions. Yet every profile, every interview or collection of letters from prolific rapists and murderers reveal much the same thing; small-minded men who live to hold and exert power over others, by any means. Such men are often well-liked and respected because many people will automatically like and respect a man in a position of power, especially one connected to religion, education or charitable work. People are deceived by such men, not because these individuals are skilled manipulators, but because their deceptions are profoundly unexpected. A little power and position is usually plenty of cover.

Perhaps the greatest horror at the heart of The Keepers is not even the truly terrible events of the late 1960s at the Archbishop Keough High School in Baltimore, but the repeated, widespread and systematic attempts by various people and institutions to prevent the truth coming to light, to silence victims, to deny their suffering and thus deny any hope of justice. I keep thinking of that saying that all it takes for evil to prevail is for good people to do nothing. This story does involve a few good people who did nothing because they were extremely confused or afraid, but it also involves a lot of people who had and still have been corrupted by power, money and the fear – not of violence – but of rocking a boat which had the capacity to drown careers in its wake. These are perhaps not so much good people who did nothing, but people whose personal capacity for evil fell far short of murder or the rape of children, who nevertheless preferred to feather their own little nests rather than see that these crimes be punished and the abuse brought to an end.

In recent years, over 3,000 lawsuits have been filed against the Catholic Church for child sexual abuse in the United States alone, some including multiple victims. In The Keepers, we see a Church, who claims to represent a man who implored his followers to accommodate children and who threw money-lenders out of the temple, which is still protesting against and blocking legal changes which would abolish a statute of limitations on child abuse cases in the US. There is no such statute of limitations on sexual offences in the UK.

I don’t think I have ever cried tears of rage while watching TV before now. I don’t imagine there is anyone who would not be upset by any depiction or description of the events of this story, but I would caution any potential viewer that this show is both emotionally exhausting, but also surprisingly hopeful.

Most of all, I think The Keepers is a story about the strength of women, albeit in the face of adversity, loss and every kind of infuriating bureaucratic obstacle. We see women using their own time and resources seeking justice for a young woman whose life and death might otherwise have been forgotten. We see women fighting not only for justice for crimes committed against them, but fighting for their own identities, for the fulfilment of their potential after a powerful but broken little man attempted to ruin their lives. And perhaps most importantly, we see women supporting one another.

Towards the end of The Keepers, abuse survivors joke about private plots they once devised to take revenge on Maskell before his death. One lady says, “Now we’re all together, perhaps we could.” I wonder if, by getting together, by refusing to be cowed and with their continued pursuit of justice, they’re already partly there.

Image description: The image is of Sister Cathy Cesnik smiling. Across the image are the words ‘Who killed Sister Cathy? and further down, the title of the show ‘The Keepers’. The image is taken from Netflix.com, all rights reserved.