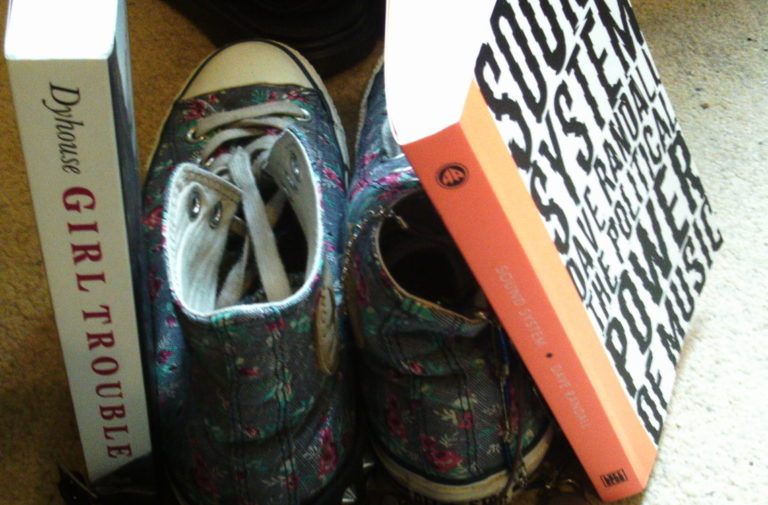 In a (sort of) continuation of August’s playlist, this month’s playlist began with an idea to mark the anniversary of the election of the 45th US President by exploring the reinvigoration of the protest song if, for no other reason, than him having inspired a lot of its most recent output.

Somewhere along the line, however, a newer and equally vital musical story reared its head, namely the simultaneous bemoaning of the death of rock by a number of key (largely male) sections of the music industry, and the accompanying rebuttal of such sentiments by a number of (largely female) musicians and critics.

As such, it seemed a good opportunity to shine a light on the likes of Lola Pistols, Rews, Skating Polly, Honeyblood, Pale Honey, Gothic Tropic, Miya Folick, Vagabond and EERA, to name a few. In a nod to both the protest arm and the guitar rock arm of this playlist, you will also hear HAWK’s harrowing take on Irish abortion laws, and at the poppier end of the protest spectrum, MALKA’s ode to the NHS. It also needs to be added, as in August, that this is quite a sweary playlist. You have been warned…

We begin with Those Darlins ‘Oh God’, a sentiment much in my mind on 9 November 2016. The song that follows it, Aimee Mann’s ‘Can’t You Tell?’ should really have been subtitled ‘The resistible rise of Donald Trump’. It was released prior to that November and is a well observed satire of the whole campaign. Will Varley’s thought provoking ‘To Build A Wall’ was also released pre November 2016, whereas both Arcade Fire and Mavis Staples’ blistering ‘I Give You Power’ and Allred and Broderick’s ‘The Ways’ were released on 20 January 2017: Inauguration day. There followed a series of songs released to raise money for Planned Parenthood, including Estelle’s excellent ‘Woman’s World’, which I wanted to include in the playlist but couldn’t make fit. There was also, more generally, the angst, anger and despair of Grace Mitchell’s ‘Kids (Ain’t Alright)’, a song that should have been subtitled ‘WTF just happened?!?’ Most recently there has been the brooding sonic introspection of EMA’s Exile In The Outer Ring.

The question of political pop is a complex and contentious one, much discussed, most recently by Dave Randall’s excellent book Sound System: The Political Power of Music, an imaginative, innovative and inspiring book that thoroughly explores the relationship between music and politics (for good or for ill) from every possible angle. His final chapter, written from his viewpoint as a musician and activist, is the ‘Rebel Music Manifesto’ in which he speaks directly to musicians, and fans, about their roles and responsibilities in 2017.

“My contention throughout this book is that culture matters” he writes

more than many people realise. But it does not change the world on its own. The more removed an artist is from other sites of political struggle, the less relevant their artistic output will be.

Similarly, the historian Carol Dyhouse, in her history of the moral panic from a female perspective, Girl Trouble, wrote in 2013:

The historian bent on taking the long view may discern clear signs of progress, but this is not in any way the surrender to complacency. For history also demonstrates the ever-present possibilities of backlash, reaction and new oppressive forces. Young women need feminism as much as ever, if they are to see their lives in context and to live them fully.

Dyhouse’s words feel very timely in 2017, and relate to the latest twists and turns in the women and rock debate as much as they do to the lives of women in Trump’s US. The surging flood of new protest music also seems to reflect this hard learned lesson, and to heed Randall’s message to the musicians of today.

Image shows a pair of flowery Converse trainers flanked (on the right) by Dave Randall’s book Sound System and (on the left) by Carol Dyhouse’s book Girl Trouble. Image by Cazz Blase. All rights reserved

Video is the fanzine/lyric video made to accompany Grace Mitchell’s ‘Kids (Ain’t Alright)’. The video begins with a group of unidentified young adults making a fanzine in what looks like a bedroom. The fanzine is called ‘Kids Ain’t Alright’ and the lyrics to the song are shown in the video using pages from the fanzine. There’s also inserts of kids skateboarding at night, setting fire to things, breaking bottles and generally running amok. Grace’s picture appears at the very end of the video, on the contributors page at the end of the fanzine.