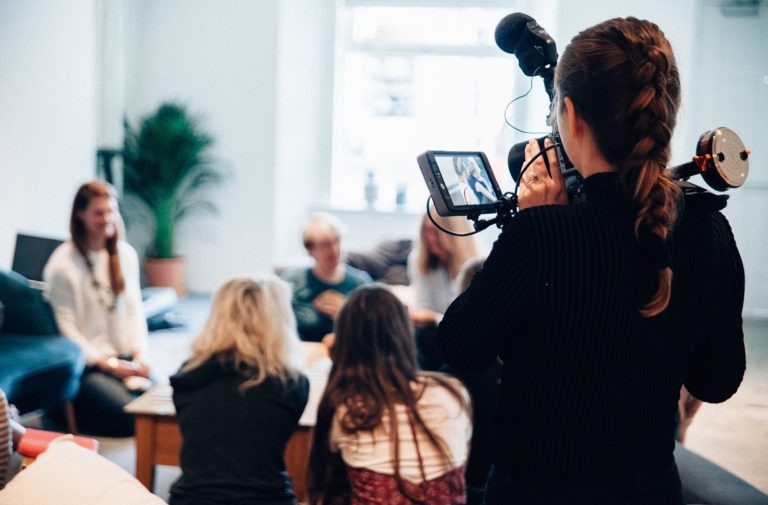 With an abundance of press coverage condemning the likes of Harvey Weinstein and highlighting some exciting new initiatives addressing gender bias and sexual harassment in the film industry, it is easy to believe that the situation for women in film must be changing for the better… But is this really so?

Indeed, during the Golden Globes awards ceremony back in January, Natalie Portman made a point of introducing the best director category as a list of “all-male nominees”. On the other hand, the Academy of Motion Pictures has just nominated the fifth woman in its history for Best Director (Greta Gerwig for Lady Bird) and the first ever woman (yes!) for Best Cinematography (Rachel Morrison for Mudbound). However, while some are looking forward to the upcoming Oscar night, seeing these nominations as harbingers of change, the situation in the UK doesn’t look that rosy. This year, the British Academy of Film and Television Arts (BAFTA) voters has nominated only men in those two important creative categories and the awards ceremony on 18 February was once again dominated by men who won pretty much all the non-acting categories except (of course!) Make Up & Hair. A notable exception was the combined victory of Rungano Nyoni (writer-director) and Emily Morgan (producer) in the Outstanding Debut category for I am Not a Witch.

In the era of social media and viral videos, where media hype can be easily created and as easily extinguished, it is sometimes useful to go back to statistics and old-school number crunching. Almost two years ago I blogged about three reports on the situation of women working in the British and other European film industries. One of those 2016 reports, addressing the UK industry only, was authored by Calling the Shots, research team based at the University of Southampton. Looking at women in key creative roles (directors, writers, producers, executive producers, cinematographers and editors) in British films in production in 2015, this report found that women constituted only 20% of key creatives, out of which only 7% were of Black, Asian, or Ethnic Minority identity, making BAME women less than 1.5% of all personnel employed in these roles. The Calling the Shots team, comprising Dr. Shelley Cobb, Prof. Linda Ruth Williams (now at the University of Exeter) and Dr. Natalie Wreyford, have now produced a new report, presenting data on women directors and cinematographers in all films qualifying as ‘British’ in production between 2003 and 2015.

This concludes that only 14% of directors and 7% of cinematographers who worked on almost 3,500 British films were women. There was a small improvement in the number of women in both categories over 12 years (28 directors in 2015, compared to 23 in 2003 and 13 cinematographers in 2015, compared to five in 2003). However, it is crucial to note that those numbers peaked in the interim (61 women directors in 2013 and 41 women cinematographers in 2010), with the report’s authors noting that there has even been a recent “decline of small gains made in previous years”. They also argue that the small percentage point increase (from 11% to 13% for women directors and from 2% to 7% for women cinematographers) signifies stagnation in the British film industry, similar to that in Hollywood. Women of colour were even more poorly represented within this disappointingly small group of directors and cinematographers:

In half the films where a woman of colour was a cinematographer, another woman (whether white or of colour) directed the film. For films directed by a man or men, only four BAME women cinematographers were employed between 2003 and 2015, with three of these working alongside a white man cinematographer.

Whether these numbers compiled by women academics have the power to change the industry remains to be seen. When the report’s authors approached Destiny Ekaragha, director of the award-winning film Gone too Far (and only the third black British woman to have directed a feature-film with theatrical distribution in the UK), she was sceptical but added: “Do I think that the report will empower and embolden women and non-white people? Yes. For that alone, it’s useful.”

The data could also come in handy in social situations, should anyone confidently claim women behind the camera in the UK have it really good these days!

All images courtesy of Calling the Shots.