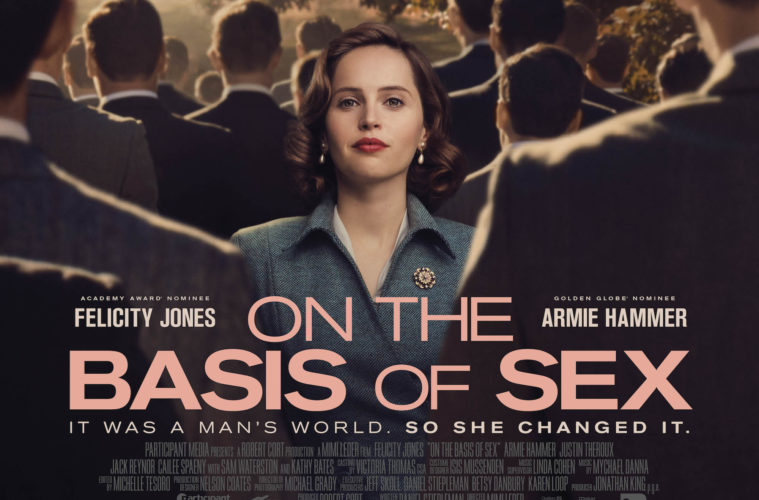 On the Basis of Sex: when a character is smaller than life

I watched Mimi Leder’s new film On the Basis of Sex surrounded by feminist film lovers at a special screening in London organised by Birds’ Eye View, with an introduction by the director herself and her two leads, Felicity Jones and Armie Hammer. I had done my homework, spied on a couple of reviews already, and given the general mixed feelings about the movie I was curious to see what I would think of it. Let me tell you, the pressure to like it was on. The movie signposts Leder’s return to the big screen after 18 years of “movie prison”. Back in the day, Leder was a rarity: a woman directing blockbuster films in Hollywood. But after the commercial and critical flop of her 2000 film Pay It Forward, Leder was pretty much confined to the realm of TV. Lots of successful TV, for sure, but nobody would call her to direct a feature. Until now. What’s more, On the Basis of Sex narrates the life story of one of America’s great icons, so it’s a film that wants you to know it’s doing something monumental. Unfortunately though, it falls flat. It’s never as great, exciting or revolutionary as its trailer sets it out to be.

The movie follows Ruth Bader Ginsburg (Felicity Jones) from the moment she gets accepted at Harvard Law School to her first gender-discrimination case argued in court. Yet, in such a long narrative, I could never really grasp Ginsburg’s character or her motivations. Written by her nephew Daniel Stiepleman, the film is clearly an homage to Ginsburg and steers clear of exploring anything controversial. Yet the shiny and polished version of RBG we get is anything but cinematic. She ends up quite stiff and one-dimensional. Is it in part due to miscasting? Probably. In a Q&A following the movie, Leder makes it clear Felicity Jones never auditioned; Leder sought her out after Natalie Portman dropped out. There is nothing wrong with a woman being ambitious and self-interested: the problem is the film is clearly trying, and failing, to show that Ruth’s the opposite

There’s no getting around it: Ruth Bader Ginsburg was born in a privileged position. The first thing we learn is that she got to Harvard. Sure, as one of nine women in a class of 500, but she did get in, meaning she had the connections and she paid the fees to attend. We then see her nice clothes, her big house, her lovely husband. She isn’t doing so bad. Sure, the discrimination against her from those in power, like her professors, is awful, but right away she knows her value and how to fend for herself. What Felicity Jones never hides in her portrayal of Ruth is the sense of entitlement that comes from such a background, and she never grows from there, with her performance not being very nuanced. Her ‘save the cat’ moment comes at a faculty dinner, when her professor asks all women at the table to justify their presence at Harvard which amounts to stealing a man’s spot. After the two women before her have been silenced, Ruth replies she’s there to better support her husband who’s a year ahead. Her sassy answer should make us like her, but Jones doesn’t deliver it with the charisma nor social justice drive one would expect. Like with all her actions in the movie, we never really believe she’s out to prove ‘women’s value’. She’s out to prove herself, and that’s it. Let me clarify, there is nothing wrong with a woman being ambitious and self-interested: the problem is the film is clearly trying, and failing, to show that Ruth’s the opposite.

In the Q&A Leder described the film as a ‘superhero origin story’, but the one thing we all know about superheroes is that they’re losers before they become superheroes. They have some kind of tragic backstory, a wound that makes them want to act as protectors of others. Or like in Patty Jenkins’s Wonder Woman, they sacrifice their family and their place of privilege to make something better of the world. Real-life Ruth Bader Ginsburg is exactly like this. She rose to her iconic state for good reasons: you don’t go back to work a few days after a life-threatening surgery if you’re not keen on making the world a better place. But film Ruth lacks that. Her personal issues, which should make the audience sympathetic towards her, are brushed over – her husband’s battle with cancer becomes a quick plot device to make her switch universities, and the effect of sexism on her career comes as a quite laughable shock once she’s unable to get any job aside from teaching. I call it ‘laughable’ because of the way she reacts to it: while this was probably a wake up-call for real-life Ruth, an injustice that pushed her to fight for women’s rights, movie Ruth turns into a bitter version of her former self, annoyed that her bright mind has to be reduced to teaching law to new generations. This flaunted entitlement kept me from liking her fictional version, who spends the majority of the film overtly focused on her lack of personal success. When her husband prompts her to understand the power she has to shape new minds into changing the world, she replies she wanted to be the one to change it, spelling out what really is the most important thing to her.

By trying to give the perfect portrayal of Ruth, the filmmakers end up with a cardboard cut-out character that is not very memorable

This leads to what was for me the most challenging and exciting scene: Ruth reproaches her daughter for protesting the feminist cause in the streets, at a Gloria Steinem rally. I heard a gasp in the room when Steinem was mentioned, and I would pay big bucks to see a movie entirely focused on these two sides of the feminist battle coming together: the cultural one and the legal one. It’s incredible to think such game-changing figures existed within the same time period. But once again, Ruth’s dismissal of these “youngsters” gives away her privilege. Why would she bother going down to the streets when she can complain in her own living room? She later says it again: “Changing the culture is pointless if the law doesn’t change.” Her dismissal of the movement stings, especially because 2018 has been the year of protesting in the streets while the law slowly turned against women. With Trump in power and Brett Kavanaugh still being elected as Supreme Court Justice after rape accusations, protesting is the one thing that gives us back some power. So to hear Ruth (the hero! the person I should be rooting for!) shut it down like that really hurt, becoming the movie’s biggest misstep.

I could argue Ruth learns from her mistakes and eventually understands the importance of attacking the culture rather than just the law, but she only does so at the very end of the film, to conclude her successful closing statement before the court. As with everything in the movie, she only shows interest in what benefits her directly. When she learns about Charles Moritz (Chris Mulkey), a single man in a carer position whose situation can help Ruth build a case to prove sex-discrimination is part of American tax law, she downright uses him. She never really cares for him, she cares about the mechanics of his case. And because Chris Mulkey plays Charles as a weak and sympathetic character, I couldn’t help but read him as someone that is being taken advantage of, even if for a good cause.

Another problem with the film’s characterisations is its treatment of male characters. They’re either awful sexists or amazing supporters. Ruth’s husband, Martin (Armie Hammer), is there for her all the way. But we’re lucky Armie is so pretty, because otherwise there’s very little for him to do other than stand around and look handsome. Ah, sounds like every other supporting wife in the history of cinema? Of course. But in a film that is supposedly about gender equality, is it helpful to give a male character the same treatment women characters have been subjected to for decades? We know how flat and empty it turns out, so why keep doing it? And this is not a satirical or meta movie, where the choice would come across as a clear commentary (think Chris Hemsworth as the secretary in the Ghostbusters reboot). The movie is riddled with visual clichés as well. As effective as the opening scene might be – with Ruth, dressed in blue, walking in a sea of men dressed in black – it quickly grows tiring to the eye, as the shot is repeated countless times in slightly different ways, with Ruth’s clothing moving to darker shades of blue. It’s filmmaking 101. It’s average.

A film about a middle class white lawyer who’s too smart for Harvard reeks of privilege. And in the age of the Handmaid’s Tale and Hidden Figures, the age where when we think of a badass lawyer we think of Annalise Keating, On the Basis of Sex comes across as way too conventional and safe. We also need to take into account that a documentary about Ruth Bader Ginsburg (directed by two women and just nominated for a Best Documentary Feature Oscar) is released around the same time, so audiences have a choice to turn to a non-fiction treatment of Ruth Bader Ginsburg’s life. This should have given the screenwriter and director even more reason to be a bit wilder with their fictional retelling. Never content to just be a blockbuster or entertainment piece, the biopic tries to tease out some bigger truth it never quite nails down. Instead, by trying to give the perfect portrayal of Ruth, the filmmakers end up with a cardboard cut-out character that is not very memorable. The filmic RBG only grows into a feminist, aware that her vision of the world isn’t enough without the cultural revolution, within the last ten minutes of the film. This might be because the creators relied on audiences to love real-life Ruth regardless, taking for granted they would be content with any representation of her. The best I can wish for On the Basis of Sex is that it intrigues non-fussy moviegoers outside the States enough to research Ruth Bader Ginsburg and her work for women’s rights.

Both images courtesy of Focus Features.
Images description:
1. Film poster for OTBOS. A white woman wearing a grey blazer with a brooch on it, with short hair and discreet makeup is looking straight into the camera among the group of suited men facing the opposite way. The lettering: Felicity Jones – Armie Hammer- On the Basis of Sex- It was a man’s world. So she changed it.
2. A group of smartly dressed people, led by a woman, is walking up the staircase to enter a grey stone building. Felicity Jones as Ruth Bader Ginsburg is in the front with Armie Hammer as Marty Ginsburg and Justin Theroux as Melvin Wulf behind her.