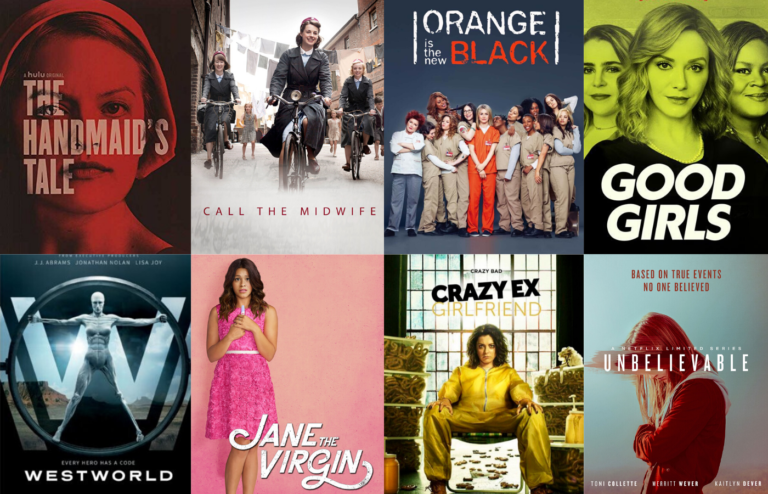 A decade of the female gaze: TV edition

The decade started off with a whimper rather than a bang for TV fans. Years 2010 and 2011 suffer from an alarming lack of feminist takes for the small screen.

The worldwide advent of Netflix in 2012 might have changed the game for some, but it’s apparent that a lot of the progress is owed to the women creators and stars who broke ranks with some of this decade-defining stories.

2012
Call the Midwife
Heidi Thomas is at the helm of this show portraying the work of midwives and nuns in 1950s London. It may not generate as many memes as other primetime shows do, but it has a solid and established following, especially in the UK. Set in the East End, the show has often been praised for its portrayal of poverty and the working class. It also investigates the role of women in the post-war world and the consequences of the so-called baby boom. Because it’s set in a nunnery, issues of faith and prejudice are bound to come up. Whether that’s abortion or LGBTQ people, the show isn’t afraid of forcing the characters to face these issues, even at the cost of undermining their sympathy when the reaction is far from what a modern audience would expect. 2013
Orange is the New Black
Based on the novel of the same name by Piper Kerman and adapted for TV by Jenji Kohan, this show marked history as one of the first Netflix binge-worthy hits. Starting off on a lesbian sex scene (when those were still very rare on US-made TV), the show quickly develops further than its lead Piper and her love story and paints instead a varied and complex portrait of the multitude of women serving time in Litchfield Penitentiary. This is the kind of honest show that portrays women at their ugliest and messiest. Dirty tampons, body hair and pee included. Mixing drama and comedy as swiftly as it mixes issues of race, gender and politics, Orange is The New Black remains to this day one of the most raw and unapologetic compendiums of women stories.

2014
Jane The Virgin
Jennie Snyder Urman just went and took the most absurd telenevola premise and turned it into a heart-warming and ground-breaking show. Thanks to its stellar lead Gina Rodriguez, Jane the Virgin balances comedy and drama with care. It’s meta as hell: to give you a sense of things, there’s a point where Jane tries to adapt a telenovela for American audiences and many of the critiques she faces are most likely echoes of what Jennie Snyder Urman had to go through. But the satirical aspect doesn’t take away from the show’s deep respect for its roots. The three leads all have Puerto Rican heritage and explore some of the most stereotyped traits Latina characters are often given in media, such as a life-altering religious faith or a strong sex drive. Through Jane, Xiomara and Alba we investigate the notion of growing up as a second-generation immigrant in the United States and of building a home away from home. (#TeamMichael fellas raise your hands).
Honorary mentions: How to Get Away With Murder

2015
Crazy Ex Girlfriend
This is one of those rare gems that isn’t for everyone, but when it clicks… It really clicks. It’s about, well, love quadrangles, period sex, stalking, mental illness and self realisation. Written and produced by Rachel Bloom and Aline Brosh McKenna (The Devil Wears Prada), it stars Rachel Bloom herself as the slightly autobiographical lead Rebecca Bunch. Rebecca is a depressed and overworked New York lawyer who decides to move to West Covina – an underwhelming small town in California – after she learns that’s where her childhood crush lives. She’s convinced that love is the key to solve all her problems. And when that doesn’t work out she (spoiler alert!) tries to kill herself in one of the most honest and heartbreaking portrayals of suicide that I’ve ever watched. By this point, late in season three, Rebecca is like a friend to the audience so the unexpected twist hits us even more because, just like in real life, we feel like we should have seen it coming. But don’t worry, there’s a timely happy ending, showing Rebecca finally falling for the one person that truly matters: herself.

2016
Westworld
If you asked any critic about Westworld when it first started, they would have all pitched it as Game Of Thrones feminist rival. Showrunners Lisa Joy and Jonathan Nolan seem to be aware of the comparison, as season one is strikingly opposite Game of Thrones in its portrayal of violence against women and sex. That is not to say violence is absent, on the contrary. But the way it’s portrayed is never gratuitous; just look at the brothel scene from episode 5. The show’s highlight is certainly the journey of its two female leads: Dolores Abernathy and Maeve. They are both robots, controlled by external entities that play with their bodies and feelings as they please. But when their consciousness clicks in, they embark on a quest to do right by themselves. Special thanks to the writers for completely annihilating the notion of the ‘nice guy’ trope. Right William? 2017
The Handmaid’s Tale
This one just goes without saying. I remember my enthusiasm when I first watched the trailer. As a big fan of the book, I shared it everywhere and an incel-leaning classmate of mine commented with, “It looks okay”. Bet he’s quite frustrated now that those red capes are everywhere. The Handmaid’s Tale completely raised the stakes. It’s not only magnificently put together – literally every single episode is a feature film in its own right – but the emotional weight and relevance to current-day events make it one of those precious gems that just did everything exactly right at the exact right time. Granted, it’s not perfect and I know a lot of people have trouble with the pacing, but remember when episode 3 showed a women’s march against the new US totalitarian government at the exact same time women’s marches against Trump were happening around the globe? It won’t help to think the show, just like the book, won’t portray anything that hasn’t actually happened at some point in history. You’ll want to open your window to make sure you’re not actually in Gilead. Yet.

2018
Good Girls
This is the year of the women killers, the women thieves, the con-women. We’re post #MeToo. We’re letting the anger drive the narrative. It’s very fun. The winner for me is Good Girls, created by Jenna Bans. Good Girls manages to pull off what films like Ocean’s 8 and The Kitchen failed to do. It’s the story of three respectable “soccer mums” with severe money problems, caused by people and events outside their control. Hence their decision to hold up the local supermarket and enter into a life of crime. Could they have gone about it a different way? Perhaps. But the show always treats its three leads with sympathy and respect, even when they’re in conflict with one another. Each woman represents a slightly different perspective, whether that’s because of race, class or a mix of both. It’s like a ten hour long heist movie with a heart and actual character development.

2019
Unbelievable
The most unbelievable aspect of this limited series event is that it’s based on a true story. It may make you want to punch the wall. Co-created by Susannah Grant, Ayelet Waldman, and Michael Chabon, it’s based on a Pulitzer-winning article about the hunt for a serial rapist and how two detectives, played by Toni Colette and Merritt Weaver, put together the evidence to catch him. It’s also about how the first ever victim (Kaitlyn Dever) was manipulated by the police into believing she made up the assault. The acting is phenomenal. The show is progressive in many subtle ways – my favourite is the casting of the rape survivors. Worth watching for the comparisons drawn between the two investigations and how the different ways of handling a rape case can influence both the outcome of the investigation and long-term welfare of the victim.

Images courtesy of IMDB.
Image description:
1. The cover image showcases a collage of the official posters of several TV-shows. These include, from the top left: The Handmaid’s Tale, Call the Midwife, Orange is the new black, Good Girls, Westworld, Jane the Virgin, Unbelievable.
2. A still from Orange is the new black. Four women (Cindy, Piper, Gloria and Nicky) stand in line in orange prison jumpsuits. The background shows a wall of the prison yard.
3. A still from the The Handmaid’s Tale. Several groups of handmaidens in red capes occupy Washington’s National Mall. Instead of the Washington Monument, a giant cross stands in its place.