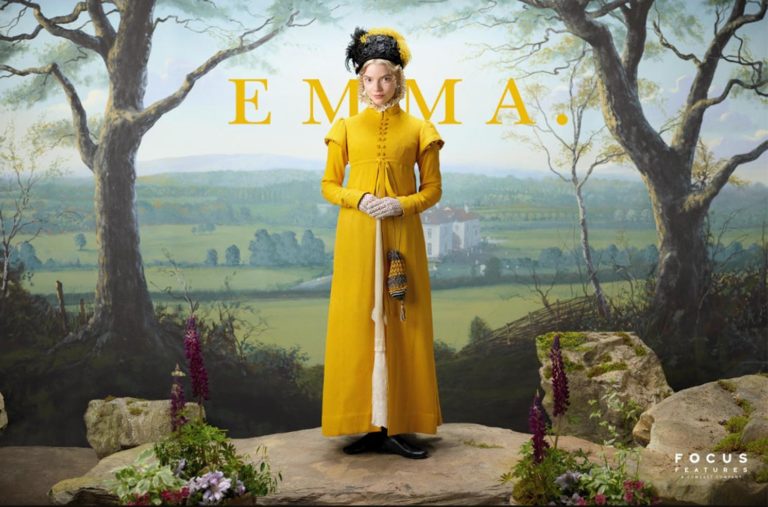 Emma. is a film adaptation of Emma the novel by Jane Austen. The feature film debut of director Autumn de Wilde, it’s enjoyed a pretty extensive advertising and PR push prior to its release on Valentine’s Day.

The Regency elegance of Austen always seems to translate well to the screen. This is once again the case here. English country houses such as the Firle Estate and Chavenage House look gorgeous and Alexandra Byrne’s costume design incorporates beautiful empire-line dresses with some of the more outrageous hats of the era. The film is at pains to point out early on that pants are really a modern invention, which contributes to the idea that there’s a whole world of smouldering sensuality going on under the high collars and artfully placed shawls.

I don’t know enough about the history of clothing dye to know if the brilliant yellows and blues of the costumes and houses are really plausible for the time, but every shot of Christopher Blauvelt’s cinematography is a joy. The cast are all, individually, very good. Anya Taylor-Joy as Emma manages to combine being completely insufferable with a great dose of charm. The chemistry between her and Johnny Flynn’s Mr Knightley is undeniable.

Bill Nighy is basically just Bill Nighy as Emma’s father, which is successful enough though I wish de Wilde had drawn just something more from him. Miranda Hart as the annoying but kind Miss Bates manages to make more of the role than just being a figure of fun. Mia Goth as the young and impressionable Harriet Smith captures her sweetness and silliness well.

As I watch these excellent actors dance around Eleanor Catton’s poised screenplay I can’t help but feel more and more uncomfortable that everyone in the film is white. Watching a film released in 2020 where not a person of colour can be seen feels very strange.


This is a fantasy version of Austen’s England. One where everyone is beautiful, no one really has to work and everything somehow always turns out for the best. And if this is a fantasy, especially a fantasy of an English history which never really existed anyway, then it’s wrong and racist to create this Regency world with no one of colour

I don’t accept that all-white casting is acceptable because of ‘historical accuracy’. If this film was historically accurate people would have bad skin and bad teeth; it’s a world without regular bathing and washing machines, with far fewer paved streets – they would be much more grubby too. In the real-life 1815 I’m sure they would have been discussing the Napoleonic wars or the newly-introduced Corn Laws.

This is a fantasy version of Austen’s England. One where everyone is beautiful, no one really has to work (even the farmers and the servants) and everything somehow always turns out for the best. And if this is a fantasy, especially a fantasy of an English history which never really existed anyway, then it’s wrong and racist to create this Regency world with no one of colour. Other films and shows have managed it and theatre’s been doing it for years. I’m bored of seeing costume dramas that all look the same.

The other thing that really sticks out as unfortunate in this adaption is that the writing leaves in the plot point of Harriet being ‘attacked by gypsies’ pretty much unchanged. It would have cost the film nothing for Harriet to have been attacked by “robbers” or “vagabonds” – it’s only a couple of lines of dialogue. What matters isn’t who attacks her but that she gets rescued by Frank Churchill (Callum Turner). At a time when prejudice against real-life Gypsy and Traveller communities is increasing, it’s unnecessary to leave this particular expression in.

Any argument that this wording is what’s in the book doesn’t hold water. Plenty of other things have been changed: in the book Harriet Smith is plump, which she hardly is here. The marriage between Emma’s sister Isabella and Knightley’s brother John is described as happy in the novel, when the film has them bickering.

You could argue that the incident with the gypsies is one of the moments that real early 19th century life sneaks into the otherwise seemingly-superficial world of Austen – while they’re sipping tea and discussing pianofortes, hungry poor people are tramping the roads in search of work – but again this is neither an historically-accurate film nor a faithful adaption of the novel.

I would say these are quite serious missteps, but despite it all I’m gleefully sucked into Emma. as it unfolds. The film excellently passes the Bechdel Test – there are plenty of well-rounded female characters and they discuss a range of things. The political and financial powerlessness of women at that time is touched upon in the discussions about Miss Bates. The stratified class system is perhaps left alone just a little too much, but you can’t have everything. It’s well-paced. It’s funny. Nothing really gets boring before there’s another twist in the tale. There’s good use of music, including tracks from Flynn’s own folk band. But I can’t help thinking that a novel as ground-breaking in its time as Emma was could handle just a touch more radicalness when reinvented for the 21st century.

Emma. is out in UK cinemas.

Images courtesy of Focus Features.
Image description:
1. The film poster showcases Emma as a blonde woman in a bright yellow dress. She stands elegantly on a rock with some purple flowers on the sides. In the background we can see a huge manor house in the middle of green fields. The title of the film appears behind Emma’s head, in the same colour as the dress.
2. Emma, in the background, looks over at Harriet with apparent curiosity. Harriet is in the foreground, slightly out of frame. Emma wears pink and white clothing and is eating a cherry.