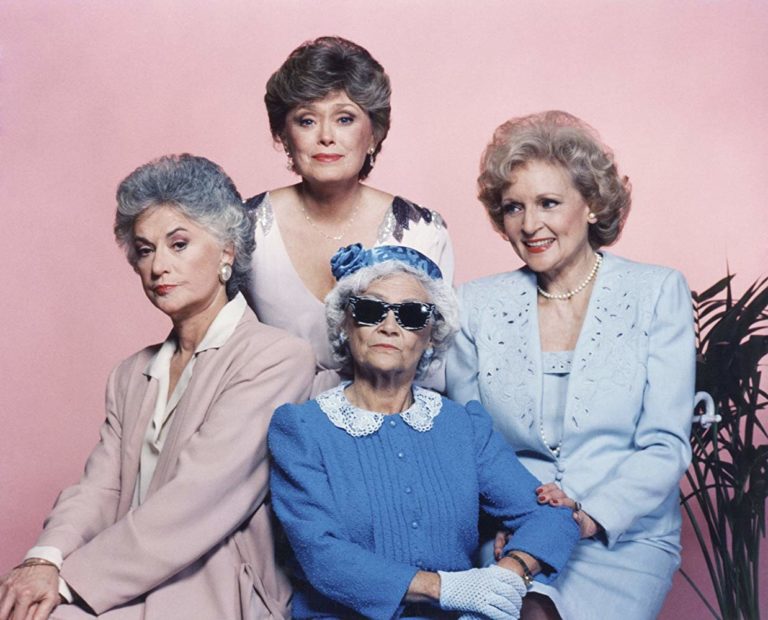 Where is Blanche when we need her?

How great would it be if Keeping up with the Kardashians star Caitlyn Jenner wins I’m a Celebrity? Finally, the nation has warmed to a 70-year old transgender woman – progress! But reality shows aside, where is the positive representation of older women in popular television? Nothing immediately springs to mind.

Not only do we not see them in television, but we don’t see them in the press, unless they’re written about with victimising headlines. It has been claimed that as soon as a woman hits the big five-o, she becomes invisible to the rest of society. But why is this the case? People all over the world are healthier, fitter and living longer than ever before. We’ve reached the point where millennials might have to retire at age 75. The population of over 65s is projected to triple by 2050. So, if life doesn’t end at 50, why do we still exclude these women from society and ignore them in the media?

The Golden Girls challenged ideologies surrounding older women by giving them the power to entertain and representing them as sexual beings who used men for pleasure rather than depending on them. As you can imagine, this was especially impactful in 1985, when the first episode was released. The Golden Girls did not adhere to the patriarchal discourses found in television at the time, which made it extremely progressive.

According to creator Susan Harris, the premise of the sitcom was to show that “there is life after 50” –and it did. In many ways, it was ahead of its time, addressing many issues which are still relevant today. Just look at some of the storylines: Sophia’s son enjoyed cross-dressing, Dorothy’s best friend was a lesbian and Blanche’s brother was gay. The four women were strong, confident and independent and, when needed, they relied on their female friendships.

So why did so very few shows follow The Golden Girls’ example? Netflix’s Grace and Frankie, which celebrates the ageing process, is perhaps the only successor that we have today. Unlike women, men’s earning potential and social resources increase as they age, meaning that society continues to value them as they grow older. Elderly men are seen as more competent than elderly women and many academics claim this is to do with their ability to conform to a narrow beauty standard. As many women get older, they often fall out of the scope of ‘acceptability’ according to this limited perspective and are subsequently perceived as lacking power. Just look at the way Jeremy Corbyn, 70, is represented compared with Hillary Clinton, 72. Throughout the previous US election, Hillary was criticised in the press for being “too old” to be president, despite Donald Trump being older than her. You would think that with age comes knowledge, but not in Hillary’s case, according to many media sources across the world. In the UK, Corbyn is supposedly not too old to be prime minister thanks to his daily porridge which, apparently, keeps him energised.


This lack of representation means that we create a culture of ageism. By keeping women over 50 out of mainstream television, we are limiting women’s perceptions of who they can be
Women over 50 are never represented as being sexually desirable and are mainly shown as wives, mothers or grandmothers in their domestic role. If women are expected to have reached certain milestones in their lives, like marriage and children, then those women who don’t achieve those goals or choose not to, are punished by the media. They are seen as spinsters or fools or predatory ‘cougars’, seeking sexual experiences from younger men.

This lack of representation means that we create a culture of ageism. By keeping women over 50  out of mainstream television, we are limiting women’s perceptions of who they can be. Todd Milliner, the executive producer of Betty White’s recent programme, Hot in Cleveland, claimed that, “To get someone to give a show like The Golden Girls a chance on a mainstream network today, would be the toughest thing.”

Even Orange is the New Black, one of the most acclaimed feminist television shows of the decade, does not overtly represent older women. Samantha in Sex and the City celebrates her 35th birthday every year by having plastic surgery. Jennifer Aniston is always ‘complimented’ with something along the lines of ‘she looks good for 50’. Carrie Fisher took to Twitter to vent about the ageism she faced when The Last Jedi came out.


It’s not that we don’t want to be seen. It’s that we want to be seen as clever, independent, capable and so much more
The Golden Girls’ openness about sexuality does not mean it’s a perfect show. The characters’ wealth and white privilege allows them access to resources that many old women from different backgrounds would not have. All three protagonists are fit and healthy, they have had successful careers and are able to afford the skincare, make-up products and clothing that helps them remain youthful.

However, until we have more diverse representations of old age, this is what remains. The Golden Girls tackled so many important issues and provided a narrative that was needed at the time – and is still required today in a culture of anti-ageing pillowcases and magazines recommending women start using anti-wrinkles products at 21 years old.

We need to change the conversation about age. One might superficially argue that with the rise in the number of young women identifying as feminists and the constant expansion of the #MeToo movement, women would rather be ignored than be seen as attractive. It’s not that we don’t want to be seen. It’s that we want to be seen as clever, independent, capable and so much more. We deserve to be visible and this shouldn’t deteriorate with age.

Images courtesy of Trevor Collens at Shutterstock.com and IMDb.
Image description:
1. The four leads of The Golden Girls sit against a pink backdrop. They wear pastel-coloured pink and blue clothing. Clockwise from the right we have Dorothy, Blanche, Rose and Sophia.
2. Hillary Clinton takes the microphone during a debate. She looks confident and eager. She wears a blue jacket. The American flag is visible behind her.