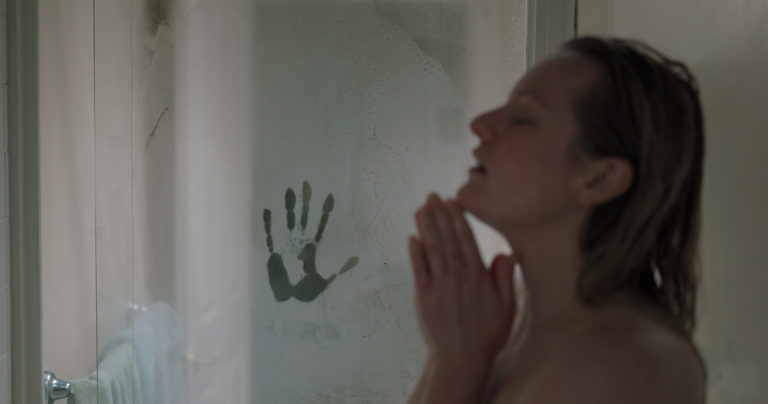 Abuse is the real invisible monster Leigh Whannell’s The Invisible Man is a timely update of the 1897 story by HG Wells. The film flips the perspective from the monster to his main victim, Cecilia Kass, played by Elisabeth Moss. The casting choice is already a bold statement, with Moss’s persona being so strongly associated with feminist award-winning TV series The Handmaid’s Tale.

The film starts with Cecilia escaping the grasp of her possessive and abusive husband, Adrian (Oliver Jackson-Cohen), a leading expert in the field of optics. A couple of weeks after hiding at a friend’s house, Cecilia gets the news that Adrian has killed himself — and left her a five million dollar inheritance.

So far so good, right? Except Cecilia’s paranoia soon turns into something much more concrete. Unsettling ghostly things begin to happen around her, such as a mysterious presence pulling off her duvet while she sleeps and snapping photos of her. The audience experiences this right along with her, but none of the other characters do.

Is Adrian really gone? Is he a ghost? Did he fake his death? Where the hell is he? All these questions torment Cecilia and her distress is made worse by the fact that nobody around her is taking her seriously. They dismiss her concern as PTSD and are almost annoyed by the fact that, from their perspective, she doesn’t seem to be getting better.

Elisabeth Moss plays that fine line excellently. Is she losing touch with reality? Her constant anxiety is palpable. Her pain and her lack of supportive relationships is heartbreaking. But she never makes us, or any of the characters, pity her. Her signature stare just off the centre of camera is a dare, a symbol of her defiance. She knows there’s something lurking in the shadows and she won’t be told otherwise.


Why am I, and others like me, much more terrified by the idea of a ghost than by technology? Realistically, cyber stalking is a much more concrete possibility in our world than a ghost hunting us. It makes us question why we work so hard to find surreal explanations for something that is just clearly and overwhelmingly abusive behaviour
The film keeps you on your toes, one terrifying twist after another. Leigh Whannell knows his tropes and uses them to mess with the audience’s expectations. He often focuses the camera on empty spaces for an unusual length of time, making us nervous at the thought of something suddenly appearing or something being there that we cannot see. The truth about Adrian won’t be what you expect. That particular twist is perhaps the most left-field one. It moves the plot from horror into a sci-fi Black Mirror-esque premise and, though I can recognise that it’s by far more original than other options, it’s also tonally jarring. Or is it? Why am I, and others like me, much more terrified by the idea of a ghost than by technology? Realistically, cyber stalking is a much more concrete possibility in our world than a ghost hunting us. It’s almost a way for Whannell to make fun of our misplaced fears. It makes us question why we work so hard to find surreal explanations for something that is just clearly and overwhelmingly abusive behaviour.

In his podcast interview with The Final Girls, Whannell clarifies that the themes of control and gaslighting are the main subjects he wants to analyse.

“Women’s stories not being believed hits a huge cultural nerve,” he says. “When you realise every woman you know has a story to tell, it becomes quite shameful. I was thinking that this idea of an invisible man spoke very loudly to the idea of the unseen threat and not being believed.”

He admits that as a male writer he doesn’t have total authority on the subject, which is why he wrote the film while consulting with counselors and LA facilities specialising in the care of domestic abuse survivors. He also credits Moss for contributing to the screenplay – she would give him her perspective on every line, sharing stories from her personal life, which eventually added up to the final picture. To me, this explains the grounded performance and care in the details, as most of it comes from real stories of women fighting these invisible monsters nobody believed existed.

The Invisible Man does have plot holes and could be slightly shorter, but the anxiety that it provokes, thanks to an excellent score and production design, really sticks. Plus, as Whannell says in the Final Girls interview, the strength of horror movies has always been that they can easily be adapted to the anxieties of the time and act as Trojan horses for a message, a metaphor, a deeper meaning. Without that, they’re nothing but jump scares. If we want to be scared, shouldn’t we be scared of what can actually hurt us?

The Invisible Man is out now in UK cinemas.

Images courtesy of Universal Pictures.
Image description:
1. Cecilia is in the shower with her eyes closed. She occupies the right side of the picture. On the shower’s door there is a mysterious print.
2. Cecilia is hiding inside a dark walk-in closet and looks out at an apparently empty room.
3. Cecilia is in an interrogation room wearing a prison suit. She is slightly off center. In the foreground, the silhouettes of two cops in dark suits function as frames for the image.