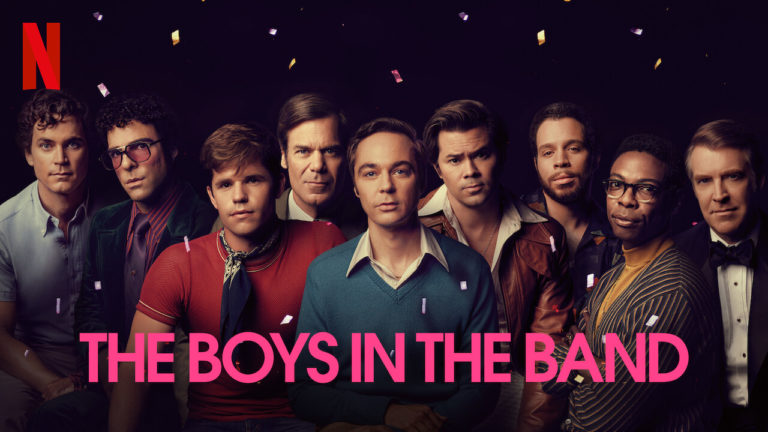 Why was this needed?

If there is one quote that epitomises the 2020 adaption of The Boys in the Band (directed by Joe Mantello), it’s this one.

In one simple phrase, the enigmatic character of Harold (Zachary Quinto) sums up the feelings of existential dread and the fear of the passage of time that the characters are experiencing. On the eve of Harold’s 30th birthday party, nine men gather in a New York City apartment. The cramped setting and the underlying tensions between the characters, combined with a steady flow of alcohol, brings out the worst behaviour in some of them.

The Boys in the Band is a remake. The original play ran on Broadway in 1968 and was adapted into a film in 1970, with the Broadway actors reprising the same roles. In 2018, for its 50th anniversary, the play was revived and once again adapted for the screen with the actors reprising their stage roles. Both the 1970 and 2020 versions have casts of all openly gay male performers.

However, where the original play and film depicted contemporary realities for their characters, the passage of time has turned the 2020 adaptation into a period piece. References and slang that would have once been understood as in-jokes by gay viewers, are now signifiers of a culture of the past and do little aside from providing a camp but poignant insight into the characters’ psyches. So why was a remake needed?

One interesting aspect of the 50-year jump between productions is the strange relationship that we, as viewers, have to the time in-between. While the universe of the film completely precedes the AIDS epidemic, the 2020 adaptation is far from unaffected by this tragedy. Not only do contemporary audiences have an awareness of AIDS as something looming in the characters’ future, but fans of the original work might also know that many of the original actors and production crew tragically passed away because of AIDS during the 1980s and ’90s. AIDS is very much a part of the play’s legacy.

Having said that, preserving the original text of the play does give a view of how people experienced their lives at the time, without the glooming sense of doom that many LGBT+ narratives set in the latter part of the 20th century tend to have.

If we look at the film in terms of comparing the progress of LGBT+ rights and how internal and external homophobia have evolved, it is absolutely an interesting film. However, as cinematic entertainment, it feels like a poor imitation at best, a vanity project dressed up as an homage, at worst.

In a decade where diversity and intersectionality are key discussions in media production, watching a film with a mostly-white, all-male cast and crew feels embarrassing

The original play and film have claustrophobic undertones of vigilance: with all the characters at various points of being ‘out’, there is a moral and occasionally envious tension between characters who are very flamboyant and open about their sexuality and characters who want to (or have to) remain in the closet. Furthermore, at a time when gay establishments were frequently raided, and being gay was heavily policed and criminalised, the mere presence of nine gay men in the same room means that they are in a legal grey area. The apartment is both a safe haven from the violent outside world and a vulnerable space that can be undone at any moment, by either inside or outside forces.

With the 2020 film’s production and release being heavily influenced by the pandemic, this friction created by a collapse of private and public space into each other should feel more pertinent than ever. Indeed, the character of Emory (Robin de Jesús) exclaiming that everyone should sit three feet apart, because he thinks the police are knocking on the door, does feel cynically apt now that we’re in a time where any physical contact is suspect.

The original film amplifies this sense of being caged by having the vast majority of the action take place inside the apartment, again something which is relatable for entirely different reasons nowadays. However, in the 2020 film, this hold that the singular place setting has over our sense of space is broken when we are transported into different times and locations through the use of flashbacks and an epilogue which takes place outside the apartment.

Similarly, in a decade where diversity and intersectionality are key discussions in media production, watching a film with a mostly-white, all-male cast and crew feels embarrassing. There is some discussion of race and sexuality in the African-American character of Bernard (Michael Benjamin Washington), which would have been new at the time of the original play, but now just feels dated. Granted, the 2020 film has made the character Emory a Puerto Rican, but it feels like lip service and miscasting, as this character’s white privilege is integral to his racist behaviour towards Bernard. By making him Puerto Rican, race is reduced to an issue only among people of colour, whereas the white characters are left on the outskirts of this conversation.

In general, there is really no getting away from the whiteness of the majority of the characters, exactly because Bernard’s complicated relation to his all-white friendship group is such a central point of conflict. However, interesting as this dynamic is, it is also one that we have seen quite a lot in the 50 years since the original. A play in the 1970s critically engaging with the privilege of whiteness in majority-white settings is interesting. In 2020 it just feels like the writers haven’t been paying attention.

And this is ultimately the question left by The Boys in the Band: why was this needed?

Producer Ryan Murphy and director Joe Mantello have mentioned wanting to showcase a hidden piece of LGBT history, as well as ‘redeeming’ the play from some of the criticism it got throughout the years. But wouldn’t it have been sufficient to point audiences towards the original? The story is a beautiful exploration of mental health, insecurity, and internalised homophobia, told in witty, quotable, dialogue. The 1970 film had all of this. Why make an adaptation of something that is still relatable in its original form – perhaps even more so? Altogether, the most interesting part of the 2020 adaptation is the way it relates to its source material. If there is one thing this film does well, it’s that it forms a link to a play that’s 50 years old, and hopefully continues its legacy for a new generation.

Don’t get me wrong, this is in itself an important task. However, there still remains the feeling that it’s a shame that this The Boys in the Band remake didn’t have the ambition of being an interesting or renewing piece of LGBT+ history in itself.