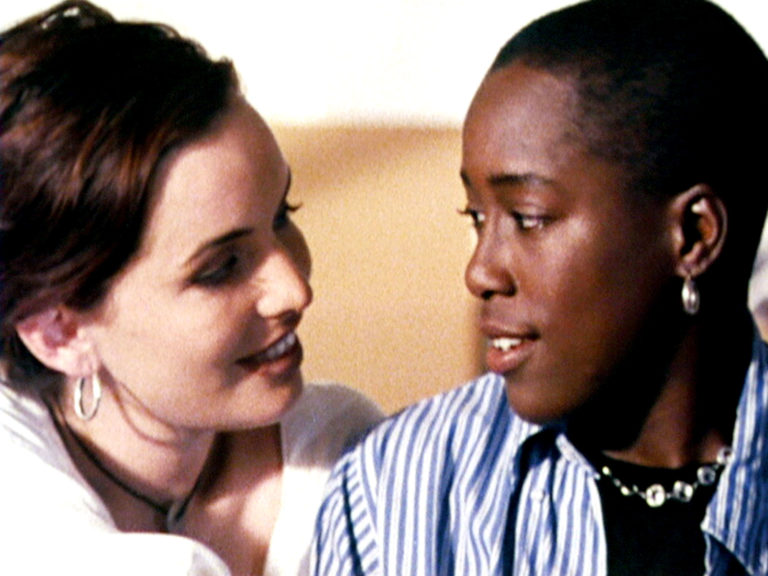 In an interweaving of fact and fiction, The Watermelon Woman tells the story of Cheryl, a Black lesbian filmmaker from Philadelphia. She works in a video store to finance her filmmaking and, through her work in the store, she encounters a Golden Age Hollywood actress, who is only billed as ‘the Watermelon Woman’. Cheryl becomes fascinated with this actress and decides to make a documentary about her.

Re-watching The Watermelon Woman twenty-four years after its initial release feels bittersweet. The film is as enjoyable as ever, and it is clear to see that it has earned its place as a modern masterpiece: the 90s vibes pop out beautifully, and there are amazingly tender and realistic depictions of intimacy (sexual, romantic and platonic).

The dialogue is witty and almost all characters have an aspect of caricature in them – the travelled white girl who thinks her visits to other countries negate her privilege, the community worker who is so caught up in doing everything ‘correctly’ she loses sight of what her role is for, and the performer who doesn’t understand that not everything is about her – yet none of the characters are ever treated with disrespect.


Dunye has created her and Fae’s own fictional origin story, but in that has become the very real starting point for those interested in art, culture and media
While the aesthetics, the setting and the clothing worn in the film clearly remind us this a 90s film, the societal issues that the film addresses are extremely relevant, even in the current day. This is both its enduring strength and a sore point. The frank-but-not-melodramatic depictions of class barriers, police harassment and the fetishisation of non-white bodies by white people are an unusual sight in a feature film. Seeing these depictions, even for me as a non-Black person of colour, feels like a recognition: finally, a film that gets it. However, it is depressing to think that since 1996, these issues have remained equally, if not more, prevalent societally.

In a more meta-textual way, what is also poignant is the exact place that The Watermelon Woman holds as a classic of Black lesbian cinema. In the last five minutes of the film, the character of Cheryl (a fictional re-imagination of the film’s writer and director Cheryl Dunye) calls ‘Watermelon Woman’ Fae Richards a beacon of hope and inspiration for her as a filmmaker. But to fans of the film, Dunye has now become that beacon herself. Dunye has created her and Fae’s own fictional origin story, but in that has become the very real starting point for those interested in art, culture and media. Certainly, the enduring draw of The Watermelon Woman proves that art by, about and for Black LGBT+ people is just as timeless as art aimed at the ‘mainstream’.

Furthermore, it would be wilfully pessimistic to pretend that nothing has changed in the media landscape since 1996. We do have more Black directors, more openly LGBT+ filmmakers, more stories about Black LGBT+ people finding mainstream success. Filmmakers and artists like Dee Rees, Campbell X, Evan Ifekoya and Ope Lori have taken up the baton of discussing race, sexuality, gender and the body, through a mixture of video arts, documentary and fictionalisation.

However, while these artists are household names in some communities, the societal mainstream of media production is still overwhelmingly white and straight. Very few examples of depicting Black LGBT+ characters (or any LGBT+ characters of colour, for that matter) in mainstream mass media feel as heartfelt as a film by a Black lesbian, about a Black lesbian. There is a reason that The Watermelon Woman gets screened at every Black History Month event, every LGBT+ History Month event and every diversity-themed event: there are simply very few other feature films about Black lesbians that are as widely available.

Ultimately, The Watermelon Woman remains a classic. However, while its classic status is undeniable, it could also be seen as a sign of a film industry that consistently fails LGBT+ people of colour on all fronts. Ideally, this would just be one story among many that centre Black lesbians. Unfortunately, it remains to be seen whether The Watermelon Woman will end up being the exception or the norm.

Image courtesy of IMDb.
Image description:
1. A close up on the faces of main character Cheryl, on the right, and The Watermelon Woman, on the left. They are looking in each other’s eyes, close enough that it appears they are leaning in for a kiss.