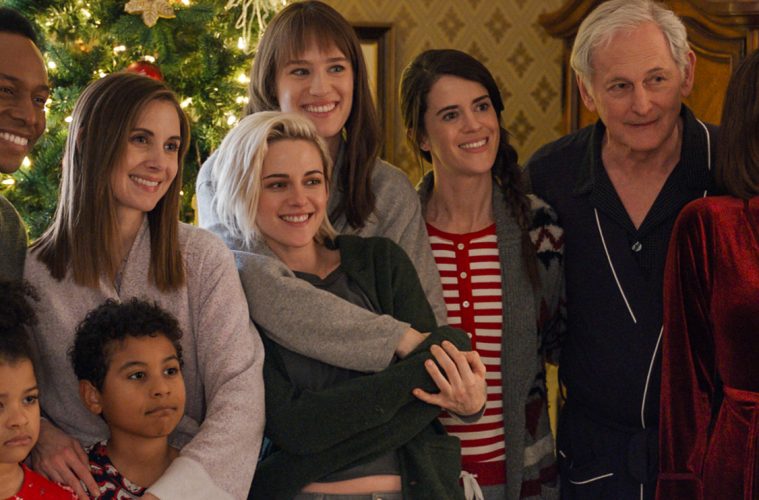 Happiest Season can be both silly and a revolution

There’s been a lot of noise around Happiest Season, the first queer holiday movie to be released via a major Hollywood studio. Writer and director Clea DuVall (of the queer classic But I am a Cheerleader fame), a lesbian woman herself, set a milestone with this production. But with some outlets going as far as calling a film that’s supposed to be a rom-com “traumatising”, “problematic” and “harmful” it’s worth questioning why the film has been put under so much scrutiny.

Happiest Season follows the story of lesbian couple Abby (Kristen Stewart) and Harper (Mackenzie Davis). While they’re initially meant to spend Christmas apart, Harper spontaneously invites Abby to her parents’ house for the holidays. What Harper forgets to mention is that she isn’t out to her parents. Not quite ready to upset the festive atmosphere (and her father’s campaign for mayor of their local town) with the news, she asks Abby to pretend to be her roommate from the city who joined her because she is an orphan and has no one else to spend the holidays with. The thing is, the excuse is absolutely ridiculous. Anyone with a less-than-heteronormative gaze would be able to tell something is up with these two. Not Harper’s family though. They are as white, heteronormative, upper class and pretentious as one could expect. While Abby reluctantly agrees, the audience is privy to the fact she plans to propose to Harper soon. They are mentally and emotionally at completely different stages of their relationship.

These secrets spur conflict throughout the entire film, coming to a harrowing climax when, after being publicly exposed, Harper denies her sexuality to her parents in front of Abby. Abby breaks up with her, in the most classic romantic comedy example of “all is lost”. Remember Amanda leaving for the airport in The Holiday? We know that’s not the end. Every romantic comedy has a break-up moment. While they have become fairly predictable, that’s not to say they can’t be brutal. The main characters from How To Lose a Guy in 10 Days essentially use one another to write career-advancing articles, yet we still believe they deserve to be together. Romantic comedies have always been about escapism rather than actual guides to healthy relationships. Film can’t work without conflict.

But in most of the film’s negative reviews, we’re told Harper’s rejection of the relationship triggers in the audience the memory of a denial that many queer people have personally experienced. It’s more poignant and heartbreaking than what we’d expect from the tone of the film, which up until that point has been filled with self-aware stereotypes, silly jokes and gags. It feels like a betrayal from a film that was marketed as joyful and care-free. While the final reconciliation gives room for the classic happy ending, what doesn’t quite come across is that Abby and Harper definitely still have issues to even out and obstacles to overcome. Fundamentally, they need to find a balance in the relationship. There is a year-long time jump to show they eventually get engaged, but the emotional journey is not shown on screen.

For so long we’ve been told our stories can’t have happy endings, it’s almost as if we now expect every happy ending to be perfect to make up for those previous failures

Let’s upack this. I wouldn’t call Happiest Season a flawless film. But its endearing predictability fills a gap for me, a queer viewer who’s been longing to watch a queer holiday movie with my girlfriend since pretty much forever. Despite the holiday theme, the film remains tied to the characters’ struggle with their sexuality. This is indeed something that wouldn’t happen in a straight rom-com holiday movie. But DuVall’s choice seems genuine to me. It would be unfair to hold up a heteronormative structure and expect a queer story to conform to it. I have been out to my closest family for over six years now, yet my grandmother still doesn’t know. Nobody’s ever denied it, but nobody has outright told her either. There are moments in my life, especially during large holiday gatherings, where I’m not sure if a certain relative knows I am in a relationship with a woman. They might as well just think she’s just my London’s flatmate (which, ironically, she is). It’s a constant issue of judging the room or waiting to see if a conversation about dating comes up. But this has created countless funny accidents over the years. The first Christmas I visited my parents with my girlfriend, I was expecting a quiet, even oftentimes awkward, dinner and night in. My mother surprised me with a giant party filled with random relatives I hadn’t seen in years. It was hilarious and terrifying. To have this explored on-screen felt validating. It made me feel seen; I knew I could trust DuVall to tell a story that came from her experience. She smartly plays with tropes, stereotypes and inside jokes that queer audiences will understand, such as lesbians moving on too quickly in a relationship or the fact they will at some point date their girlfriend’s ex – and here I have to ask the fans of the Abbey/Riley pairing: would that really have been a much more original plot line to push forward? Queer people’s experiences vary largely. It’s unfair to expect DuVall to be the voice for all of them. It’s not that we shouldn’t be critical, but achievements such as this deserve to be examined within the context they’re created in. To be the first queer holiday movie released by a major studio must have required compromises. Queer narratives have so long been defined by tragic endings or high-brow cinema and, while the community constantly pushes for more, we remain extremely critical of everything else that moves outside of that – recent examples of this include the mixed reactions to queer teen show Love, Victor, or the queer lead couple of horror show The Haunting of Bly Manor. In the case of Happiest Season, audiences expecting a feel-good story without conflict goes against the very structure of storytelling and is, quite frankly, diminishing to the complexity of queer struggles. Happy endings aren’t endings if there’s no story to lead us there.

It’s absolutely fair to be protective of our experiences and to crave a story that makes us feel seen and not traumatised. I’m the first one to jump up at the mention of a film or show with intriguing queer representation. There are still so many gaps to fill! What’s unfair, however, is to put anyone (DuVall, in this case) on a pedestal or to hold a queer movie to a higher standard than we would a similar non-queer movie. While it might be true that any publicity is good publicity, there’s a level of exhaustion that comes with seeing every single queer work scrutinised to such a large extent. For so long we’ve been told our stories can’t have happy endings, it’s almost as if we now expect every happy ending to be perfect to make up for those previous failures. But is perfection really what we need? What does that even imply? Aren’t complexity and honesty more valuable when reclaiming queer narratives out of the boxes they’ve been put in?

There’s no easy answer to this, but celebrating imperfect films, especially when they’re the first of their kind, doesn’t mean giving up the battle for better queer representation. We just get to pop some popcorn and enjoy what we’ve been fighting for – at least for a little while.

Images courtesy of Sony Pictures Publicity.
Image description:
1. The main characters from Happiest Season pose for a picture in front of the living room’s Christmas tree. They are embracing and smiling.
2. Abby and Harper are ice-skating in an indoor ice rink. Abby is leaning down against a reindeer and smiling up to Harper, who returns the smile. Fake gingerbread houses can be seen in the background.