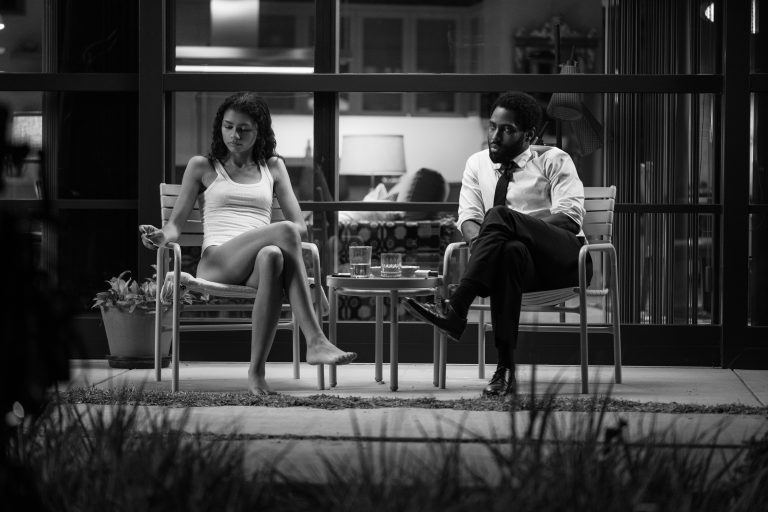 With Malcolm & Marie, nothing is black and white

As award season speculation begins to ramp up and we remain deep in another consecutive period of government-sanctioned Netflix and chill, can Sam Levinson’s offering prove itself among this year’s Oscar contenders?

Malcolm & Marie was Netflix’s most-watched title on its debut weekend. Produced by and starring John David Washington and Zendaya as the eponymous characters, it proves itself to be a simultaneously mundane, stressful and thought-provoking experience.

The aesthetics of this film are undeniably gorgeous – a high contrast black and white finish, a beautiful set and an undeniably good-looking leading couple lend a stark film noir feel which both embodies and sits in opposition to the subject matter: a plain old argument. While this narrative is much more everyday than the grandiose plotlines you’d expect from classic noir movies, it’s still infused with the cynical and fatalistic tones characteristic of the genre. As the film opens, you are introduced to Malcolm, an apparently successful director coming down from the high of his first massive movie premiere, and Marie, his self-assured girlfriend who is stung by not having been thanked in his introduction speech. These establishing scenes are almost exclusively long shots, allowing us time to take in the whole scene before the camera crashes into uncomfortably close angles – and wow, do you get uncomfortably close to Malcolm and Marie throughout this film. In fact, the story provides the viewer with an almost painful insight into a relationship where the two characters are undeniably drawn to each other, but also have complex issues around resentment and trauma that seem to prevent them from being happy. Malcolm and Marie are almost always out of sync with each others’ feelings, and this disconnect is immediately and jarringly obvious in the opening scenes where Marie is apathetic, disinterested and plain old pissed off, while Malcolm is so wrapped up in his own success that he is unable to see or understand her feelings. As the film continues, these dynamics shift at breakneck speed as we are catapulted from blazing rows to intimate scenes and back again. Most viewers will be able to relate to the more everyday patterns of this argument, however, the relatability soon gives way to a series of beautifully scripted monologues, which are almost comical in the way they poetically swing from one perspective to the other. Cruel words are traded and then almost instantly forgotten, with the other party almost always paying rapt attention.

Certain points in the narrative feel like the brink of a horror film, and while the argument never breaks down into violence, it never feels far away

I may be predisposed to sympathise with the pissed off woman (in fact, I’ve been her), but the film does set you up to empathise with Marie’s perspective from the beginning and makes it really difficult to like Malcolm. Not only does he refuse to apologise, despite Marie’s issue with Malcolm appearing more than justified, but even before we know what it is she’s angry about, the camera stays on her as she gets more and more sorrowful, while Malcolm paces in the background listing off his achievements, coming off as tone-deaf and unable to read his partner. His worst traits are frequently showcased: my particular favourites being the scene where he verbally abuses Marie while tucking into a plate of mac and cheese that she’s served him, or watching him get increasingly turned on while she sardonically strokes his ego. He carelessly and cruelly insults her by alluding to her past issues with addiction and mental health, at one point calling her a “fucking mental patient”, and is so wrapped up in his own ego that on several occasions he is completely oblivious to major shifts in conversational tone. It’s immediately obvious that Malcolm’s main insecurity and number one concern is his fear of being mediocre, and this leads him to gaslight Marie and deny the influence that she’s had on his success. However, while Malcolm is very much set up as the bad guy, as the film continues and past indiscretions are dragged up, the waters get more and more muddied until it’s not certain where the viewer’s loyalties are supposed to lie. Unlike the film’s aesthetic, with this couple, nothing is black and white – which is one of the most believable aspects of the narrative.

The film employs some interesting techniques to invite the viewer into the fray, establishing a very real tension that remains present, waxing and waning to different intensities as the scenes unfold. Malcolm & Marie was the first Hollywood feature film to be entirely written and shot during the Covid-19 pandemic and, as such, the production had to be confined to one space. This singular setting soon becomes claustrophobic as Malcolm and Marie take their frenzied maelstrom through room after room, returning to the same spots several times, and only leaving on two occasions: to pee in the wilderness or stomp through the undergrowth, ranting. Certain points in the narrative feel like the brink of a horror film, and while the argument never breaks down into violence, it never feels far away. Trying to keep up with their argument while it spans seemingly endless subjects and resentments leaves the viewer feeling winded. As valid motivations and concerns are lost to vitriol and point-scoring, at one point the narrative descends into literal incoherent screaming – and it was while watching this scene that I had to physically unclench my jaw. “You are exhausting”, Malcolm tells Marie. Correction: they are both exhausting.

Sudden moments of dark comedy are introduced: the scene where Malcolm slumps on patio furniture trying to smoke a cigarette while Marie passive-aggressively plays Dione Warwick’s ‘Get Rid of Him’ is quite a strange shift of mood. This means the viewer can never quite get comfortable and is dragged along on this visceral, raw rollercoaster of love, vulnerability, pain, abuse and egotism. Malcolm and Marie refuse to come close to seeing each other’s perspectives, never mind actually approaching any kind of resolution.

Similarly, it feels like Malcolm & Marie had a real opportunity to make interesting commentary on social issues but it never quite gets there. There are several nods to the uncomfortable reality of working as a Black director in the film industry, including Malcolm’s refusal to see his work as political simply because he is Black, and his obsession with the opinions of a “white girl” critic, but this theme is never fully developed. Perhaps, as white man, Levinson struggled with the authority to command this commentary. Of course, Black characters don’t have to be cast exclusively in films where the narrative revolves around their Blackness, but it feels disappointing that this potentially interesting dynamic is mentioned but never ful The entrenched racism that exists in Hollywood also reared its head off-screen, as Malcolm & Marie was arguably unfairly subjected to criticism around the age gap between its leading actors, something that many prominent films with predominantly white casts didn’t experience. Unfortunately, this isn’t the only recent occasion where a film or TV series centred around characters who don’t fit the white hetero norm was subject to unfair criticism – much was made of the stark difference between the tabloids’ interpretation of the sex scenes featured in It’s A Sin (“shocking”, “explicit”, “raunchy”) versus Bridgerton (“hottest sex scenes ever”).

Zendaya herself has spoken out against this criticism, claiming that as she has been known for her Disney roles, people forget that she is “grown”. The fact that Malcolm is significantly older plays into the imbalance of their relationship, as Marie is forced to play the part of muse to his “genius” creative mind. But the 12-year age gap may have felt less problematic if other issues around gender were handled more sensitively. Several scenes throughout the film gratify the male gaze. We are treated to extended, roving shots of Zendaya’s body and she spends at least half of the film either in the bath or wearing a revealing vest and underwear. Meanwhile, Washington remains fully clothed for almost the whole duration. There are also some mixed messages around consent, with Malcolm at one point repeatedly asking if he can kiss Marie, and continuing to press his agenda in what’s presented in a sexy and playful way, even as she repeatedly says no. These elements feel a bit icky, and the almost meta-level of self-awareness the movie demonstrates around race seems to be completely absent here. There is a depressing irony in the characters discussing the unnecessary sexualisation of the lead actress in Malcolm’s movie, in a film where Zendaya herself is unnecessarily sexualised. If this irony is deliberately present, there is no sense of resolution or advancement that makes it worth including.

Overall, Malcolm & Marie is very different from any film I’ve ever seen, which is no mean feat in this day and age. It sparks interesting conversation around relationship dynamics, particularly in the debate around whether a partner has the right to own another’s pain. Beautifully shot, it gives a lot of visual pleasure but overall watching it was quite a stressful and exhausting experience. At one point, Marie tells Malcolm that he could have delivered the same message with twenty percent of the words – and this is something I believe rings true for this film. At the end of the day, I’ve had enough arguments of my own to want to spend nearly two hours living through another couple’s experience. And that’s all this film is – a beautiful, curated, raw, visceral, painful, uncomfortable, exhausting argument. And as with almost all arguments, there are no winners here.

Malcolm and Marie is available to watch on Netflix UK.

Images courtesy of Netflix Media Centre.
Image description:
1. The titular characters sit on a patio outside a modern glass window that looks onto a living room. While Malcolm looks at Marie, she is avoiding his gaze and looks down at a cigarette in her hand.
2. Malcolm and Marie stand behind the kitchen counter of a sleek modern mansion. He looks at her, she looks down at something she appears to be cooking or chopping.
3. Malcolm and Marie are embracing. He holds her from behind and they look into each other’s eyes.