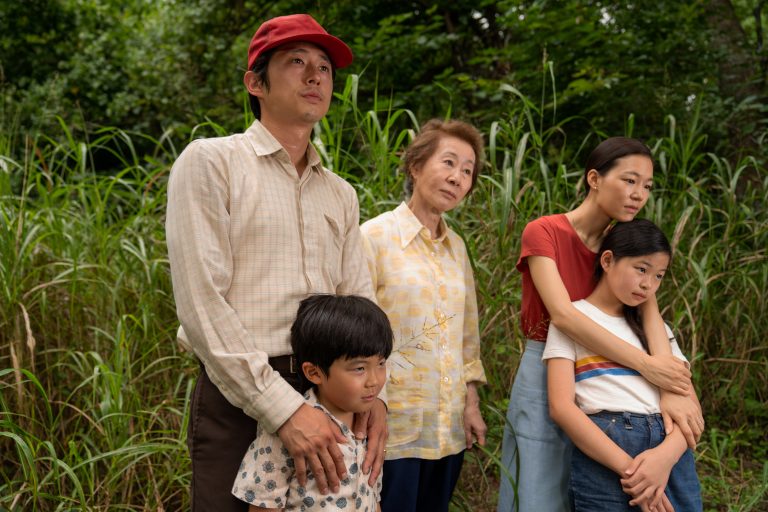 After a year of staring exclusively at my laptop screen, as UK cinemas reopened, I headed straight to the nearest big screen and plonked myself on a red chair to watch Minari. Directed by Lee Isaac Chung, Minari is a semi-autobiographical take on his own upbringing. The film follows a South Korean family moving to rural Arkansas to start a farm on their new plot of land. Deliciously 1980s golden hues hug the lens, almost tricking you into buying the same so-called American Dream that the father, Jacob (Steven Yeun), is immovably determined to achieve at any cost. The themes of familial duty and the tricky navigation of an immigrant family struck a deep chord with me. My parents migrated from China to the UK in the late 1980s and their version of a 50-acre Arkansas farm was a five-metre-square takeaway in the home counties.

As I watched Minari, Minari made me feel seen

We meet the Yi family in Minari during their move from California to Arkansas, where Jacob plans to start a farm and sell his vegetables to nearby Korean vendors. His wife Monica (Han Ye-ri) is reluctant to make a new life in their Arkansas trailer and worries for the future of their daughter, Anne (Noel Kate Cho) and young son, David (Alan Kim), who has a heart condition. Jacob and Monica also work at a hatchery sexing chickens (yep, I had no idea this was an actual job either).

Headstrong and uncompromising, Jacob invests all his time and money into the farm. In a quiet moment at the hatchery, he explains to David that the male chicks get destroyed and he jokingly tells his son, “That’s why we have to find a way to be useful.” This otherwise flippant comment reveals a lot about Jacob’s view of masculinity and what he believes the ‘head of the household’ is supposed to do, as well as his desire to buy into a Reaganite idea of individualism.

Each of the family members takes a great deal of strife and sacrifice on their shoulders. We see Jacob and Monica’s marriage in turmoil as they battle over how to create a better life for their family. They both feel a sense of unappreciated sacrifice. What is less explored is Anne’s sacrifice of a worry-free childhood as she steps up to take care of the home and her brother. While her brother David takes up a lot of screentime with his carefree attitude, his anxious bedwetting and adorably cherubic cheeks, Anne’s character is not fully fleshed out.

Perhaps I identify with Anne’s experience of being the oldest daughter who is expected to fulfil the caretaker role while the parents are busy working. Maybe that is how Chung wanted her to be seen: the steadfast sibling who does not demand any congratulations or recognition. But I wish the female characters weren’t all made to be so self-sacrificial.

On this note, Youn Yuh-jung enters as Grandma Soon-ja. Her character adds a brilliant lightness to the film as well as warmth, wisdom and insight; the performance quite rightly earned Yuh-jung the title of Best Supporting Actress at the 93rd Academy Awards, making her the first Korean actor to win an Oscar in the category. Chung celebrates the character of Soon-ja, giving her fantastic quirks that any audience would fall in love with. An avid wrestling fan, a Mountain Dew lover and possessing a patient humour, Soon-ja develops a complicated but growing bond with David. He is sceptical and disappointed about how un-grandma-like his Grandma is, but with time and patience, they plant and nurture the Korean plant of minari (water celery) down by the creek together. Soon-ja explains minari is a resilient and adaptable plant, which doesn’t require much attention, and that both the rich and poor enjoy the bountiful food it produces.

Grandma’s traditional knowledge and relaxed approach, opposed to the hustle of chasing the American Dream, is what is ultimately successful in saving the Yi family unit

It’s an obvious parallel that Chung is drawing here about the film’s namesake. As the film closes, we see that the minari is the only produce that survives when all of the other vegetables are destroyed in a disastrous fire. Unassuming and without expectation or rigidity, the Korean plant is able to flourish and, in turn, the Yi family can make a living. Grandma’s traditional knowledge and relaxed approach, opposed to the hustle of chasing the American Dream, is what is ultimately successful in saving the Yi family unit.

That said, Minari isn’t entirely quite the Korean-American immigrant dream. During what’s arguably the most heartbreaking moment of the film, Soon-ja has a stroke overnight, wetting the bed in the process. In an almost Christ-like sacrifice or Freaky Friday switch (choose your cultural reference), David stops wetting the bed and doctors say that his heart condition has improved. It seems that for every success story, a sacrifice is needed. That yang has to be accompanied by yin.

The film has a pace that mirrors the ups and downs of family life and the story is beautifully complex and simple at the same time. What was most striking to me was to see a familiar Asian home life blasted on a big cinema screen – the homemade medicinal soups; the bags of Asian spices brought over by Grandma; the innocent remarks made by other children about our ‘flat faces’; the way the dining table was laid out with chopsticks; the effortless weaving in and out of English to Korean; and of course, the absoluteness of familial duty and sacrifice.

As I watched Minari, Minari made me feel seen.

Images courtesy of IMDb.
Image description:
1. The family stands in a green field. From left to right, Jacob, David, Soon-ja, Monica and Anne. They appear somewhat somber, looking off into the distance.
2. Soon-ja and David look at each in the backseat of a car. She appears to have a smirk on her face.