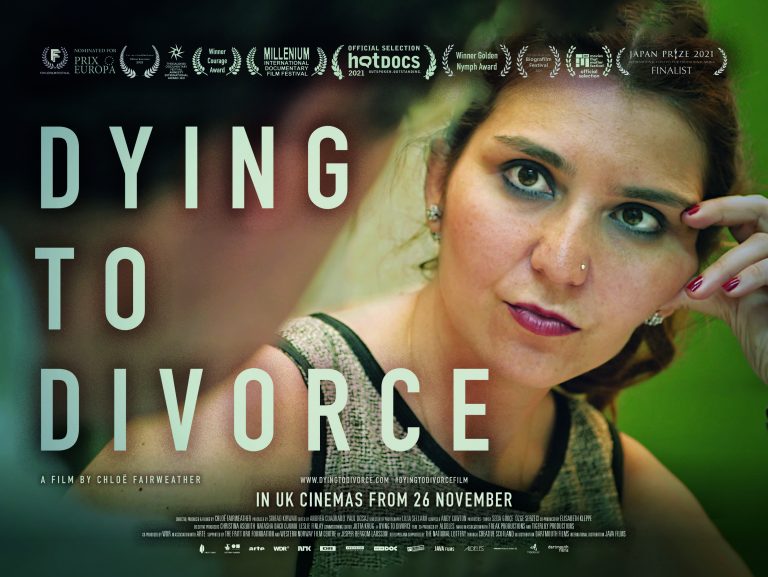 Dying to Divorce: an interview with director Chloë Fairweather

It’s the day of Arzu’s divorce. They are ready to go to the courthouse. Her husband stands calmly at the door with a shotgun. He says he doesn’t want to kill her; he just wants to hurt her enough to make her crawl. She hides her arms. “If I had my arms then I could take care of my children.” She tells us in a voiceover. He shoots her seven times.

In the film, we meet Arzu through the activist Aysen. Arzu is lying in bed months after the incident, having lost both her legs and now, the doctor informs her, the use of her arms as well. Her husband has taken away her life. This news has the potential to destroy Arzu and her support system, but it doesn’t. As with every woman in the documentary, when the situation gets more challenging, they get stronger.

Arzu pauses and looks to Aysen: “I’m going to get back on my feet and face him.”

Dying to Divorce focuses on Ipek Bozkurt, an activist lawyer fighting for survivors of domestic violence in Turkey and working against a criminal justice system that perpetuates femicide by handing out reduced sentences for acts of violent misogyny. All the while, these women face growing risk from Turkey’s increasingly repressive political climate.

“When power becomes more centralized and the views of those people who are at the centre are broadly dismissive of women… That’s not going to help when decisions are made about whether to believe a man or a woman, for example”

We follow two of Bozkurt’s cases, Arzu’s and Kubra’s, as she battles to put their husbands behind bars and help the women regain custody of their children. Arzu was married off at 14 by her father, then shot by her husband just as they were set to divorce. Kubra, a successful TV presenter, sustained head injuries inflicted by her husband that resulted in the loss of speaking abilities and abduction of her child.

The film has been chosen as the United Kingdom’s official entry for the Best International Feature Film category at the Oscars.

I interviewed the film’s director, Chloë Fairweather, about the film’s marathon production process and what the nomination means for future conversations about domestic violence.

What did it mean for these women to tell their stories?

“In Kubra’s case, her husband was denying it. So, I think the frustration of not being believed or feeling like she might not be believed was a really big deal. [Also] having people around who believed her and wanted to hear her story and follow the process of speaking out. Her story was about regaining her voice, going through speech therapy so that she could speak again and give testimony. I suppose for her, it was just the act of speaking that was fundamental to her story. The basic level of actually having a space to speak came through as a really important theme in the film.” Fairweather explained the importance of building a relationship with the survivors and how she navigated gaining their trust and that of their families:

“We did spend loads of time talking with them off camera, getting to know them and obviously we did it over many years, so that they allowed us to be there in those very intimate moments. I think being very honest with people and very transparent and very open about what you’re doing, why you’re doing it… I think you build trust by being trustworthy.”

Dying to Divorce began filming in 2015 and took five years to complete. Fairweather and her team initially planned to focus solely on Bozkurt and the process of securing justice for Arzu and Kubra, however, as circumstances in Turkey changed, the documentary’s direction evolved with it.

“The relationship between the bigger picture of Turkey and how it related to the women’s lives became much more of a focus of the film,” explains Fairweather.

In 2016, there was an attempted coup against the government, which resulted in a crackdown on voices not aligned with the populist views of the president, Recep Tayyip Erdogan. In the film we see a growing concern in the legal community, as lawyers, including Bozkurt’s close friends, are put in prison for fighting injustices. Fairweather and I discussed how the murder of women is political and how the increasingly hostile backdrop allowed her to highlight this in the documentary:

“It filtered down to the survivors and their pursuit of justice. When power becomes more centralized and the views of those people who are at the centre are broadly dismissive of women… That’s not going to help when decisions are made about whether to believe a man or a woman, for example.”

Fairweather explained how she translated this intersecting political and cultural environment when piecing the documentary together:

“Inequality generally is systemic and it’s quite subtle. It’s hard to name it and show it. So, I think finding the opportunities to reveal that and explore that was the really big challenge. I knew it was affecting women and their rights and I wanted to reflect that in a real, tangible story. For example, in 2021, Turkey withdrew from the Istanbul convention, which is the first really obvious row back on women’s rights in terms of taking away a massive legislative framework that supports women. But during our filming, we didn’t have that. It’s about how you show that more subtle, incremental chipping away.”

The film manages to tackle this challenge, unfolding in three overlapping layers, cutting between the survivors’ journeys, the increasing danger that Bozkurt is in as a lawyer and scenes of political turmoil. There are moments when Bozkurt is struggling to prove that Kubra’s head injury was caused by her husband, as a vague forensic report complicates the process. We see what the activists are up against: the obstructive institutions disregarding women and protecting violent men.

Another distressing moment comes as we hear an interview from inside the prison where Arzu’s husband is being held. His words echo those of the president’s speech we witnessed a couple of scenes before. Erdogan states: “We should kiss the soles of the feet of our mothers” but “you cannot put women and men on an equal footing. That’s against nature.” Her husband blames the increasing rights of women for his imprisonment, stating that “women have been encouraged to do wrong”, with that wrongdoing taking the form of expressions of independence, such as filing for divorce. The two audios chillingly reflect each other and show how the political force has indoctrinated a culture of violence against women. “It’s not easy to change the culture of violence but because it’s constructed, it means that it can change. It’s a huge struggle and battle but there is another reality that can exist and there’s no easy solution as to how you get to it”

Later in the documentary, the filming crew attends the International Women’s Day parade with Bozkurt and her friends. What was supposed to be a non-violent, celebratory event turned sour as the police intervened with tear gas. This is just one example of the risks that women in Turkey and everyone who participated in the documentary face for exercising their right to a voice. Most recently, the march for the International Day for the Elimination of Violence against Women in Istanbul on 25th November 2021, notably the film’s release date, was broken up with the same aggressive response. I asked Fairweather if she felt scared for her own safety during the creation of the documentary because of the role she played in amplifying the voices of these activists. How did she deal with this as a filmmaker and as an individual?

“We did have to change the way we were filming and be really careful in terms of what we filmed out on the streets or of street protests. We felt like we minimised the risk, but we didn’t get rid of it entirely because we did need to film things to tell the story, out and about. And we did have lots of confrontations with the police and I didn’t fight my corner in that respect. I was there on a tourist visa for the majority of it because we knew we wouldn’t really get an official permit to make the film. We also were following people like Bozkurt and she is connected to other lawyers who regularly get arrested, so we felt like we had support, like we wouldn’t just disappear off the map. It’s one of those situations where you just have to be careful because when you’re there, it doesn’t feel overtly risky, you know? But we were lucky, really lucky.”

While at many points difficult to watch, the film is not completely overwhelmed by the negative aspects; there is a rewarding sense of perseverance that aims to counterbalance almost every moment of suffering:

“Ipek said this amazing thing the other day when somebody asked a question. She said women are often outnumbered three to one by police officers at these marches. And she said how much of a woman am I, that there’s three of you to me? The Turkish women’s movement has this amazing sense of humour and that’s part of what keeps everybody going as well. It’s a grim reality and in those dark places, you get to really understand the power of hope and solidarity, and that it is unbroken by that situation. It’s not easy to change the culture of violence but because it’s constructed, it means that it can change. It’s a huge struggle and battle but there is another reality that can exist and there’s no easy solution as to how you get to it. But, you know, when you see how a culture is created, you can also see how it can be changed as well.”

I’m curious as to how she feels Dying to Divorce relates to our position in the UK.

“When I was making it, I never felt that Turkey was this remote, other place or that these problems were happening far away from me. I always connected to them and related to them. One woman is murdered every three days in the UK; there is a very shockingly low rate of prosecution for sexual violence and these are parallels that happen in Turkey. In that situation it’s more extreme but in both places a culture of impunity has been created because perpetrators are shown that there aren’t consequences for their actions.”

The film has received well-deserved critical attention since its release and most recently, has been selected for Oscar and BAFTA nominations, signalling a decisive turning point for films tackling this pressing topic. Fairweather concluded our interview by looking to the future:

“Femicide, domestic abuse and misogyny are real and we need to talk about it. And anything that helps create a space for people to recognise it in their own societies and think about it and engage with it is really important. We’re just hoping that the film raises awareness and creates that conversation that feels really needed. And it feels needed here. It feels needed everywhere.”

Dying to Divorce is submitted to the BAFTA’s for Best Documentary and Film Not in the English Language categories for your consideration .

Images courtesy of Dying to Divorce Ltd and Seda Gokci.
Image description:
1. A photograph of Ipek Bozkurt as part of the official poster. She looks at an obscured figure in front of her. The title is in bold letters on the left side and festival laurels adorn the top of the poster.
2. A photograph of Arzu Boztas during her recovery time. She practices walking on her prosthetic legs. She’s surrounded by loved ones.
3. A photograph of director Chloë Fairweather filming during a protest.