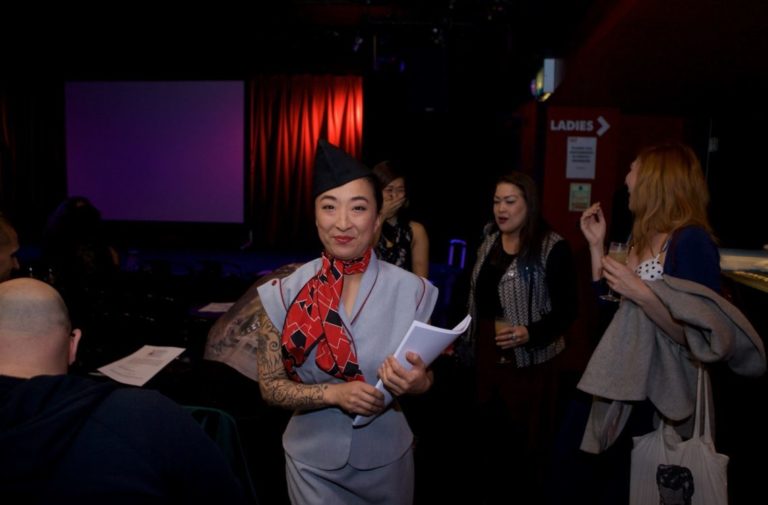 Earlier this week I had the pleasure of attending the press night of the stage adaptation of the film The Diary of a Teenage Girl at the Southwark Playhouse. It’s a really enjoyable show, with a great cast and excellent use of projections. I’ve never seen the film, so I can’t tell you how it compares, but reading Mercedes McGrath’s review of the film for The F-Word, I agree with the writer that it’s fantastic to see a younger female character who is interested in sex and has agency in her life. The play is on until 25 March.

The WOW – Women of the World festival will be running in Hull this weekend as well as London as part of Hull 2017. Hull-born comedian Lucy Beaumont will be opening the festival with a live restaging of her Radio 4 comedy series To Hull and Back with her on-radio mum Maureen Lipman and will also be inviting the people of Hull to a comedy workshop during the weekend. At the heart of the festival will be a series of panels inspired by the series of conversations held across the city with the women of Hull last autumn, including issues such as domestic abuse, inequality in the performing arts, equal pay, body image and championing care. Some events will have live subtitles or British Sign Language interpretation. Coming up at Hackney Showroom on 27 March is Femme Feral’s THERESAMAYSMACKDOWN, a wrestling show that is also a queer, feminist, anti-fascist, noise-driven, ferocious, fight-based riposte to Theresa May’s pronouncement “In tough times everybody has to take their share of pain” which looks brilliant. It’s part of a festival of cultural activism called Joy & Dissent.

Catherine Hoffmann is going to be on tour with her autobiographical piece Free Lunch With The StenchWench. Charting the drive for survival and fitting in, the StenchWench shares stories of growing up as one of the feral underclass whilst precariously existing in Austerity Britain today. Hoffmann will be in Leeds on 22 March, Camden People’s Theatre from 30 March – 1 April, Glasgow on 7 April, Norwich on 19 April and Colchester on 26 April.

Next month Fancy Chance will be at Soho Theatre from 25 – 29 April with her show Flights of Fancy. A globe-trotting, time-traveling mini-spectacle with turbulent polemics and unexpectedly poignant stop-offs, Flights Of Fancy tells the true story of the artist’s journey from Korean refugee to international cabaret performer. Fancy Chance has previously written for The F-Word about her experience of growing up in a mainly white community in the US and how romanticised portrayals of Asian women have affected her life.

Soho Theatre has a few more things coming up that we reviewed at the Edinburgh Festival Fringe last year: Emma Sidi: Telenovela (16 – 18 March), Expensive Shit (4 – 22 April), All The Things I Lied About (18 April – 6 May) and CUNCRETE (18 – 22 April). Expensive Shit will be audio-described on 18 April and captioned on 19 April.

Sara Pascoe has added some extra dates to her tour of Animal beginning with Lincoln on Saturday. The full list can be found here. These dates follow the publication of Pascoe’s debut book which was reviewed for The F-Word by Lauren Hossack.

The National Theatre’s production of Hedda Gabler will be going on tour at the end of this year. It will be going to Plymouth from 2 to 7 October, Edinburgh from 17 to 21 October, Leicester from 23 to 28 October, Salford from 30 October to 4 November, Norwich from 7 to 11 November, Hull from 13 to 18 November, Aberdeen from 21 to 25 November, Northampton from 28 November to 2 December, Wolverhampton from 23 to 27 January 2018, Nottingham from 5 to 10 February, Newcastle from 12 to 17 February and Milton Keynes from 27 February to 3 March. Many of these venues will be including assisted performances as part of the show’s run.

A new version of Laura Wade’s Posh will be presented at the Pleasance Theatre in London from 29 March until 22 April. Posh is a riotous story of an Oxford student dining club, a fictionalised version of the infamous Bullingdon Club, and I loved it when I saw it at the Royal Court back in 2010. This version is all-female which should shed an interesting light on the class privileges that feature so much in the play.

I should mention that this production has come under some criticism for not paying its cast and crew Equity rates. Writing as I do for a volunteer-run website, and working in my day job for an Arts Council funded organisation I often find the question of how and when people get paid for their work difficult to navigate. I think it’s fine for me to choose to write this article for fun for example, but I’d never dream of asking one of my company’s performers to work for us for free, and in the unfunded fringe those questions get even harder. What do you say, feminist readers? Is working for no or low fees the only way that some non-mainstream work will ever get made, or is this too much of a barrier to participation for those from less privileged groups in society? Let me know what you think.

And lastly Francesca Marie Claire and Katy Poulter and have launched a new comedy YouTube channel, We Don’t Hate Men, with this parody of Stormzy’s single Big For Your Boots as a salute to mums across the globe, also known to them as ‘The Mumdem’. Most of the lyrics are subtitled, but not all I’m afraid.

Image 1 is a photo by Sin Bozkurt of Fancy Chance. Chance is walking down the aisle of a venue wearing a flight attendant’s uniform including scarf and hat. Her arms are bare and her right arm is tattooed. Some members of the public are around her, and it looks like three of them are laughing at her. Chance is looking directly at the camera with a tight smile.

Image 2 is a photograph of THERESAMAYSMACKDOWN. It is a close-up black and white image of two people wrestling and is a little blurry. One is wearing bra and knickers and the other is wearing fishnet tights and a leotard. The person wearing underwear’s face can be seen, and their head is thrown back with their mouth wide open.

The video is a parody of Stormzy’s grime song Big For Your Boots, and shows a number of women and a few men and children in a variety of ‘normal’ locations like a children’s playground and a kebab shop. The two women singing dance while singing straight to the camera and trying to look hard.