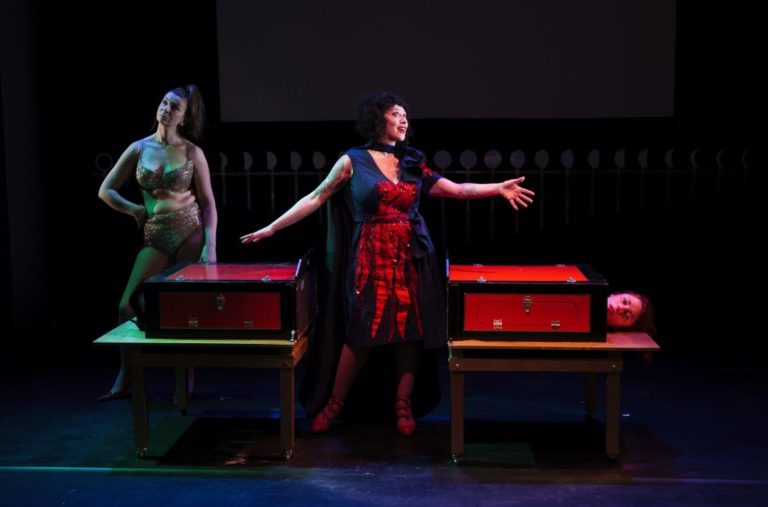 Just before I head off to Glastonbury Festival for a few days (where I will definitely not be going to see Johnny Depp) here’s the June stage round-up.

Marisa Carnesky will be at the Udderbelly South Bank from tonight until Sunday 25 June with Dr Carnesky’s Incredible Bleeding Woman. Here’s Carnesky’s showreel (the showreel is soundtracked by Peter Pan from Armando Sciascia Orchestra a film tune from the 1950s but has no text.)

Between 22 and 24 June alternative standup comedian Siân Docksey is hosting a mixed bill of comedy previews at The Glory in Haggerston. Promising politics, videogames, whoopass, lemons, gay lemons, surrealism, avocados and more lemons I’m sure they’ll be fun evenings. The other acts are Eleanor Morton, Joe Hart and Sophie Duker.

Judith Lucy and Denise Scott will be at Soho Theatre from 27 June until 7 July with their comedy show Disappointments; Soho guarantee that this show will make you feel better about your lives or at least help you accept the rut that you’re in, which sounds like quite a promise!

Next month Greater Manchester Fringe is happening. Events that appeal to me include S/he/it Happens, All I Want is One Night, Wood, Katharine Ferns is in Stitches and Samantha Pressdee.

Coming up at the Blue Elephant Theatre in south London are Escape 2 on 7 and 8 July from LCP Dance Theatre which tells the emotional journey of a refugee using innovative aerial dance and multimedia; The Break-Up Monologues on 19 July hosted by Rosie Wilby, a themed comedy, storytelling and spoken word night which looks back at some best and worst relationship breakup stories and Here Comes Trouble on 27 July from Keira Dance, a personal investigation into womanhood and Keira Martin’s individual identity.

I quite like the look of everything at the Postcards Festival at Jacksons Lane in north London in July too. I enjoyed Boys Club when I saw it, plus Sarah Blanc’s It Started with Jason Donovan and Tanter’s Vixen sound great.

Hopefully not featuring any known domestic abusers in their lineup, Latitude Festival has some really good things this year. My favourite show from last year’s Edinburgh Festival Fringe, Hot Brown Honey; Sh!t Theatre with DollyWould, a riotous and challenging work on the iconic image of Dolly Parton and all she embodies; new one-woman show Hear Me Raw by Daniella Isaacs; Gagglebabble, The Other Room and Theatr Clwyd will join forces with Sinners’ Club which is based on the life of Ruth Ellis, the last woman to be hanged in the UK and Vanessa Kisuule will come to Latitude with Sexy which presents a conflicted women who loves poetry and smashing the patriarchy with a well-timed slut-drop. If you’re going to be there, let me know what these are like.

Katherine Ryan is going on tour between September and November this year as well as also being at Latitude.

And lastly a couple of things to watch and listen to:

Image is courtesy of Marisa Carnesky and shows the performer standing on stage with the two halves of the box used for the ‘woman sawn in half’ trick either side of her. Someone’s head is sticking out of the half of the box on her right as if, indeed, that person had been lying in the box before Carnesky cut them in half. Behind and to the left is a figure wearing glittery knickers and a bra top as a showgirl might but looking very bored.