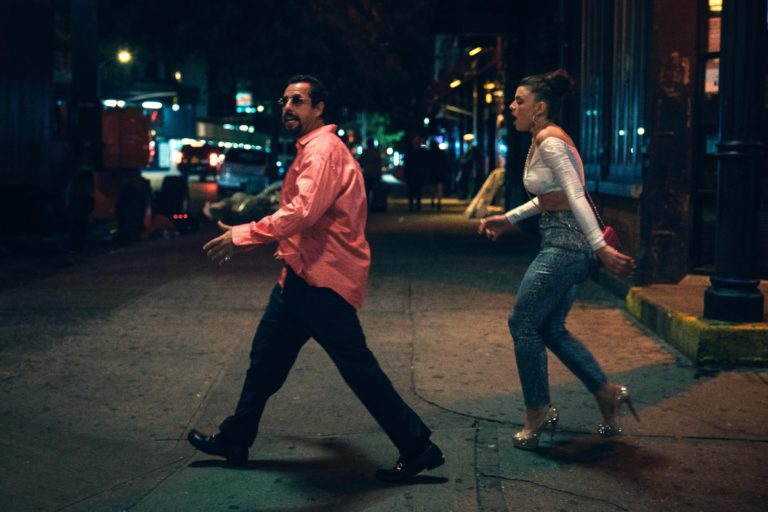 Uncut Gems is 135 minutes of non-stop shouting, whinging, screaming chaos with an anxiety inducing score to match. Adam Sandler’s Howard charges headfirst into situations, completely unaware of the dangers they might bring. He seamlessly fits into the character of a jeweller in New York completely absorbed by his trade, blinkered by a rare Ethiopian black opal he is intent on making a profit on. His co-star, debutante Julia Fox, who the Safdie brothers had in mind when writing the role, has been unanimously hailed as a breakout star. In an interview in the Guardian, Fox sums up the parallels between herself and the character of Julia in the movie: “Being independent, resilient, being a hustler, having a ride-or-die mentality, and overall just being really cute.” With the decision to call her character in the film by her real name, the line between reality and fiction is even more blurred.

But, looking closely at the film, do the Safdie brothers actually manage to deliver this multifaceted character description onscreen? The overall cuteness, overloaded with sensuality, is definitely there, but there are only snapshots of independence or power. In a typical postfeminist fashion, Julia is a character who finds empowerment in her body and in an active sex life. But the Safdie brothers don’t go far enough to translate this into agency, so her power gets lost in translation and Fox’s character is largely reduced to an object to be looked at, with very little nuance.

In Uncut Gems, Howard has one other object that his gaze is geared towards, and that is the rare black opal, which perpetually fascinates and drives him forwards. Is Julia any more than just an object, is she only as fascinating as that rare uncut gem? What do the Safdie brothers do, if anything, to help keep her subjectivity intact? How can filmmakers negotiate postfeminism onscreen, especially women who find agency in their sexuality, when the camera is inherently voyeuristic?

Fox’s character certainly develops as she becomes an instrumental part of the plot line in the lead-up to the climax of the film, but Julia is merely a carrier of money, a proxy for Howard to place a big bet. She is a savvy, sexy mule who knows she can use her looks to achieve her – or rather Howard’s – ends. Julia’s sense of cunning makes her competent and integral to the plot line in that climactic betting sequence, but she has very little of her own agency, and is only trying to please and impress Howard.

That said, Julia does have compelling and layered moments in the film. The closet scene is an interesting example of an attempt to subvert traditional voyeurism. As she is being watched by Howard hidden in a closet, Julia is clearly emboldened by her sexuality, taking selfies for Howard in her lingerie and touching herself. Whilst the scene is in keeping with the classic idea of a woman being looked at and brings the viewer closer to the inner workings of Howard’s brain (the viewer and Howard share a commonality: secretly watching Julia in her underwear), Julia is not completely stripped of her agency. Far from a victim of voyeurism, Julia is imagining Howard’s gaze, which increases her sex drive and therefore her self-pleasure. But as much as she feels sexy, the shot of Julia in her lingerie as seen through the crack of a closet door enters into a subject (male-active) vs. object (female-passive) relationship beyond her control and so her subjectivity starts to dissipate. It’s a classic postfeminist predicament whereby a woman who is empowered by her sexuality cannot escape the objectifying voyeurism of the camera. Self-pleasure and empowerment is lost in the way the scene is shot, as the Safdie brothers and cinematographer Darius Khondji don’t do enough to invert traditional gendered power dynamics. There’s a club scene that brings this tension between Julia as a sexual object and a sexually empowered woman to an even higher level. The only person wearing a tight white top and pale jeans in a room of people mainly wearing dark clothes, Julia’s body is fluorescent in the UV light of the club. Howard has caught sight of her in the background gently swaying to the music. The camera lingers on her with a counter shot of Sandler struck by the vision of her, returning with a medium shot focusing on her face and her absorption by the music. The shot of her face helps to cast Julia as a completely separate entity with her own living and breathing desires, but there is still a voyeuristic element here, as she dances unaware of his stare.

Later, during an intimate scene which Julia shares with The Weeknd in the bathroom of the club, Howard quickly erupts and releases a tide of uncontrollable anger. Julia’s untamable sexuality which exists beyond her love affair with Howard is a force that he cannot face up to. In signature Uncut Gems chaos, Julia frantically tries to make him reason but, propelled by his own ego and jealousy, Howard leaves the club.

Here the camera moves to a rare subjective tracking shot, following Julia’s side as she is walking back towards the club. This tracking shot is a vital moment of complete and utter unambiguous subjectivity, without the usual threat of objectivity. These forty seconds are a testament to what the Safdie brothers could have done to bring Julia’s character into completeness. Facing derogatory comments from people in line, Julia bats them off, and walks with steadfast determination to not let Howard’s public outcry and denouncing of her sexual act bother her. It’s one of the rare moments where we really get inside Julia’s head.

Julia remains by Howard’s side until the very end, comforting him with sex at his lowest moments. It is testament to her unconditional love for him, but it is also something of a male wet dream. It sends the message that even when a man is bloodied, beaten up by his own family, having failed in the one thing he was planning, he will have a beautiful woman ready to give him pleasure.

Fox’s acting is no doubt worthy of the Breakout Actor nomination she received at Gotham Independent Film Awards; her energy works to shape the film’s aesthetic and achieve its success and rave reviews. But with very few subjective camera techniques, the Safdie brothers play too much on her looks and on her ‘cuteness’ (which seems more and more like a childish safe word to avoid saying ‘sexiness’), whilst her independence, resilience and ride-or-die mentality are lost in the process.

American entertainment company A24 might be producing boundary pushing, distinctive indie films including Greta Gerwig’s Lady Bird and Joanna Hogg’s The Souvenir, but Uncut Gems is not too far off the large majority of Hollywood films that frame beautiful women as objects to be looked at.

Images courtesy of A24.
Image description:
1. Julia chases Howard down a street. It’s night and she is dressed up for a night out, while Howard looks much more casual.
2. A portrait of Julia against a red couch. She has brown hair down to her shoulder and hoop earrings. She looks intrigued.
3. Julia is in a dimly-lit night club. She appears happy and smiling. She is standing up, while some people can be spotted sitting down behind her and having a chat.