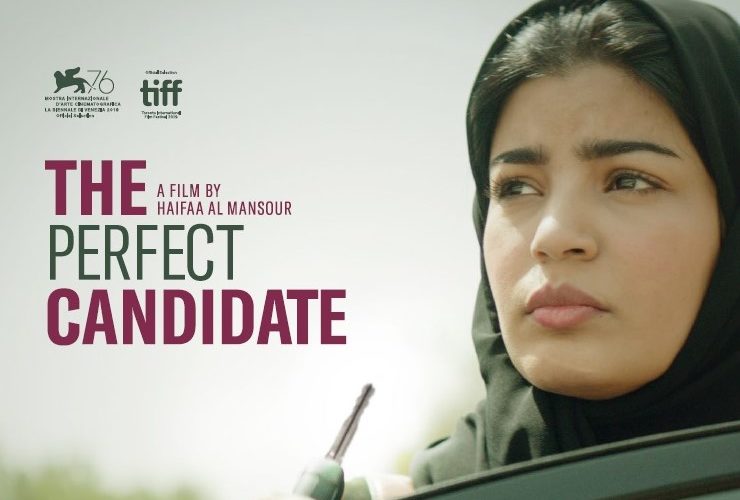 Director Haifaa al-Mansour comes back to her home country of Saudi Arabia for her fourth feature, The Perfect Candidate. After the success of her debut film Wadjda, which took almost five years to film, mostly from the back of a van, it’s understandable al-Mansour would experience considerable differences while approaching this new project, almost eight years later.

During her Crowdcast chat on Modern Films’s platform, organised in partnership with Bird’s Eye View, al-Mansour gladly reassures us that she could shoot out in the open this time, “screaming to everybody in person”. Locations were easier to access, although Saudi Arabia still lacks a proper film industry. There are no studios, no casting directors, no location scouters.

This means al-Mansour draws a lot of ideas from her personal life – like her relationship with her 11 siblings – and she’s used to casting non-professional actors.

Haifaa al-Mansour is very capable of balancing the expectations of a local audience, who want to identify with the story, and those of a Western public, who are often more interested in observing a different culture
The Perfect Candidate is the story of Maryam (Mila Al Zahrani), a doctor in a small town in Saudi, who decides to run for the municipal council in order to fix the hospital’s unpaved entrance: because of the state of the road and a burst pipe, emergency services are unable to carry patients to the front door.

It’s a clear and selfless goal, but nevertheless Maryam has to confront skepticism from her younger traditionalist sister (Noura Al Awad) and from apathetic members of the town, who either refuse to consider a woman for the position or are simply not interested enough in joining a controversial cause. She is unable to address male voters directly and has to cover up entirely when appearing on television.

Despite the stakes in Maryam’s situation, the tone of the film never sinks into melodrama and maintains a light and almost comedic accessibility: al-Mansour is very capable of balancing the expectations of a local audience, who want to identify with the story, and those of a Western public, who are often more interested in observing a different culture. Maryam’s relationship with her two sisters and father is the heart of the film. As they deal with the aftermath of her mother’s death, all of them have drastically different ways of altering their behaviour. Maryam dedicates herself to the campaign and to making sure her voice is heard; her older sister (Dae Al Hilali) becomes obsessed with her work as a wedding photographer and their dad Abdulaziz (Khalid Abdulraheem) leaves on a music tour with his band.

Abdulaziz is an unusual character. Instead of placing a stereotypical patriarch at the helm of a household of women, al-Mansour introduces us to a sympathetic and kind man who is following his dream of becoming a professional singer, leaving his daughters with complete freedom to build their own careers. During her chat with Modern Films, al-Mansour explains that she is keen to portray this other kind of masculinity, one that is seldom celebrated. It’s also a great side plot to explore Saudi Arabia’s skepticism towards the arts: the family is often mocked because of their involvement with music, which is considered a trivial career.

“I want to show how layered reality can be in my home country,” al-Mansour says during her interview, “I don’t want to over explain things.”

Another theme that is carefully explored in The Perfect Candidate is women’s personalities and how they can differ when expressed in public versus when in private or among other women.   “People don’t normally see their energy,” al-Mansour complains. “I want to represent women across the board.” This has led her to use clothing as an instrument of exposition: an aspect that can be seen in a fantastic scene centred on an abaya fashion show. The choice of wardrobe is significant: it’s an original spin to see that, under the veil, the women characters are very modern and fashionable. In this film, the ritual of putting the niqāb on is a metaphor for women characters interiorising their most inconvenient feelings.

Another twist on traditional narratives in The Perfect Candidate is that Maryam distances herself from being classified as a women rights’ activist. She’s first and foremost a doctor: an ambitious and logical person. She isn’t driven by a desire to make the world better or to change the way all Saudi women think, at least not at first. She is adamant to make sure her political goals are heard by all genders because they concern everyone. Maryam’s aim to improve access to the hospital is not a feminist project per se, but everyone who interviews Maryam is quick to dismiss her intentions and ask her about her views on women’s rights instead. The film offers a new way of looking at the issues women politicians have to face: that their abilities or goals are reduced solely to the gender they belong to, despite their professional qualifications.

The Perfect Candidate has all the right cards in place to leave a mark. It’s layered and timely, but also heartfelt and extremely accessible, even to those who might not usually consider watching a subtitled movie.

The Perfect Candidate is available to watch on Modern Films.

Images courtesy of iMDB and Sundance Institute.
Image description:
1. The film’s poster shows Maryam on the left side, coming out of her car, wearing a hijab and holding her car keys. The title is displayed on the left with logos from Venice Biennale and Toronto International Film Festival.
2. A scene from the film showing Maryam and her two sisters looking at something. The youngest sister looks bored, while the other two are attentive. Maryam is the only one wearing traditional clothing, while the sisters wear leisure clothes.