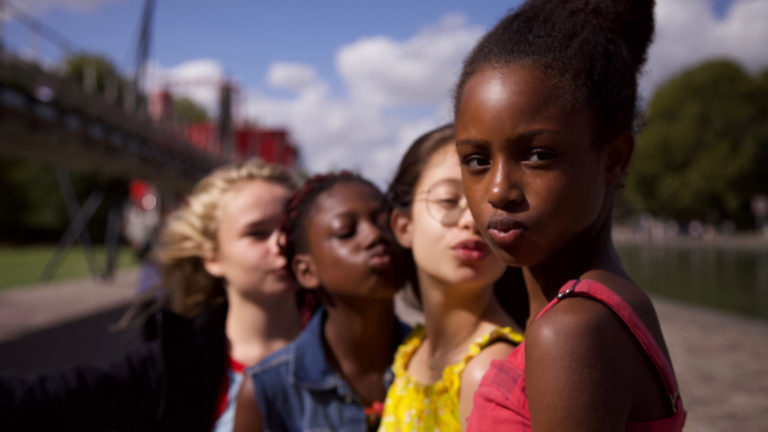 The hypocrisy of the Cuties controversy

When the trailer for the new French film Cuties landed, its supposedly borderline paedophilic content was met with revulsion and disdain. With scenes of 11-year-old children twerking in tight, revealing clothing and shots of girls gyrating with their fingers in their mouths before falling over, legs wide open, it is not difficult to conceive the ire which met the trailer. Social media users accused Netflix of promoting and normalising paedophilia and decried the streaming giant for its markedly distasteful choice of promotional poster, which was used without the filmmakers’ consent (tellingly, a different, more innocuous poster was used when the film was originally shown at independent film festivals.) In addition to its vocal detractors, however, Cuties has many defenders. Praising the film as a moving coming-of-age drama, Vulture wrote: “All that awkward gyrating and twerking… Amy is simply trading in one form of subsumed patriarchy for another. That doesn’t mean, however, that the dancing isn’t fun, or freeing, or that the Cuties don’t help Amy gain a sense of herself.”

There is clearly discordance between Doucouré’s vision of her own personal experiences, her attempt to remain respectful towards her young cast and Netflix’s crude promotional tactics

To the film’s vilifiers, the justification “but it’s critiquing the sexualisation of young girls!” may appear to be a catch-all excuse to detract from condemnation of the film and label those who find the frequent scenes of child semi-nudity to be problematic as deluded moralisers. In critiquing the pervasive sexualisation of young girls, Cuties nonetheless uses its child actors’ bodies as props through which the filmmakers channel their political points.

We are familiar with the concept of the male gaze, but what about the adult gaze? Children are innocent and susceptible, with little to no agency when faced with the ‘expert’ filmmaker who wields immeasurable power. Therefore, child actors are subject to the whims of adult filmmakers and this imbalance of power means that they can never be complicit in their own sexualisation. However, in the case of Cuties’ director Maïmouna Doucouré, the film parallels her own childhood experiences. Doucouré shares the same Senegalese heritage and thus ’body‘ as the protagonist, which is very different to a male or white director telling a story through the body of a black girl. Having said this, there is clearly discordance between Doucouré’s vision of her own personal experiences, her attempt to remain respectful towards her young cast and Netflix’s crude promotional tactics.

Undeniably, European cinema has a particularly bad track record when it comes to onscreen child sexual exploitation and the Cuties trailer follows a trend that has been rampant for decades. Growing up as a devotee of the Criterion Collection, I came across many instances of this as I watched its arthouse archives. Two of my earliest recollections are Luis Buñuel’s Belle de Jour and Bernardo Bertolucci’s The Conformist. In the former, an underage girl actor is filmed from the socks upwards, the camera lingering over her prepubescent legs as a middle-aged man claws at her flesh. In the latter, perennial pervert and Kevin Spacey apologist Bertolucci depicts abuse against the protagonist when he was 13-year-old. Undoubtedly, these disturbing scenes made me wince in discomfort and shock at what venerated auteurs could get away with in the name of ’art’.

When convicted child rapist Roman Polanski was unable to attend the 2003 Oscars ceremony due to his exile in France, he was honoured with a standing ovation after he won the Best Director award for The Pianist. Moreover, superstar George Clooney bemoaned that: “it’s awful to imagine they’re still after him”, while #MeToo critic Catherine Deneuve said that Polanski had “suffered enough”. The ensuing outrage was generally muted and sparse, but there is no doubt about Polanski’s crimes; when interviewed by Martin Amis, Polanski practically revelled in his predilection for children (“everyone wants to fuck young girls!” he enthused.)

But seemingly paedophilic films are not the sole preserve of the stereotypically unabashed Europeans. Hollywood is just as guilty. For example, despite the 1992 allegations of child abuse, actors continued to work with Woody Allen for decades, only belatedly condemning him years later. Allen’s works are littered with allusions to paedophilia. There are suggestions that film director Sandy Bates (played by Allen) may be attracted to his lover’s 13-year-old cousin in Stardust Memories. In Crimes and Misdemeanors, Cliff Stern (also played by Allen) forms a physical bond with his 12-year-old niece, one that he is unable to emulate with the adult women in his life. Like Polanski before him, Allen now predominantly works in France.

We need look no further than 1980s The Blue Lagoon, which promotes the notion that children are inherently sexual beings stifled by societal norms; it is worth noting that, at the time of filming, Brooke Shields was 14 while her male co-star was an adult. The Blue Lagoon is no anomaly. In The Exorcist, 14-year-old Linda Blair masturbates with a crucifix. Once Upon a Time in America includes a voyeuristic scene of 11-year-old Jennifer Connelly getting undressed. Thora Birch was a minor when filming American Beauty yet appeared in a wholly unnecessary topless scene. Hounddog contains a rape played by 12-year-old Dakota Fanning. The late Alan Parker’s Bugsy Malone has dubious dance scenes akin to Cuties; little girls dressed in revealing costumes are filmed from behind as 13-year-old Jodie Foster sings about her many dalliances with various men.

These filmmakers’ reputations and acclaim within the industry cause us to gloss over these actions, in effect exonerating them

One may think that Hollywood has come a long way since these decades old films, which is part of why we are so aghast at Netflix’s salacious, if not misleading, advertising tactics for Cuties; we believe the sexualisation of young girls to be something we look back on with shame and remorse. But, as recently as 2012, we have seen the likes of Moonrise Kingdom, a film which has inspired a whole generation of director Wes Anderson zealots, all seemingly oblivious to its degrading content. Moonrise Kingdom revels in shots of 13-year-old Kara Hayward bending over while wearing a mini dress and knee high socks, having her adolescent chest fondled by her equally underage love interest, who she later French kisses. The film depends on the trope that teenage girls are far more sexually mature than their guileless male counterparts, thus justifying their overtly sexualised portrayals.

Yet, Moonrise Kingdom was not met with disgust, but adulation. Whereas Netflix sought to stir controversy with Cuties by using ostensibly paedophilic imagery as a marketing ploy (they have since apologised), the distributers of Moonrise Kingdom were cautious not to promote the film as titillating. Moreover, indie darling Wes Anderson’s ‘clean’ reputation helped him to get away with questionable scenes that ought to make most viewers feel unnerved.

The same goes for the numerous other Hollywood films that feature child nudity and underage actors forced into uncomfortable sexual situations. These filmmakers’ reputations and acclaim within the industry cause us to gloss over these actions, in effect exonerating them, while lesser known filmmakers, such as Cuties director Maïmouna Doucouré, receive death threats for their contentious works. As a black woman, Doucouré was subjected to far more abuse than her male or white peers have ever encountered. Indeed, studies have shown that black women face more abuse than any other group on social media.

So, gasp and tut in disgust at Cuties, but remember this; revered male directors are getting away with far worse.

Cuties is available to watch on Netflix.

Images courtesy of IMDb.
Image description:
1. The four lead girls of Cuties stand in row looking into camera. They are posing with their lips in pout.
2. The original poster of the film, where the four lead girls run up a street jumping and dancing. They are carrying colourful shopping bags and wearing oversized bras and panties over their clothes. Confetti appears to be falling from the sky.