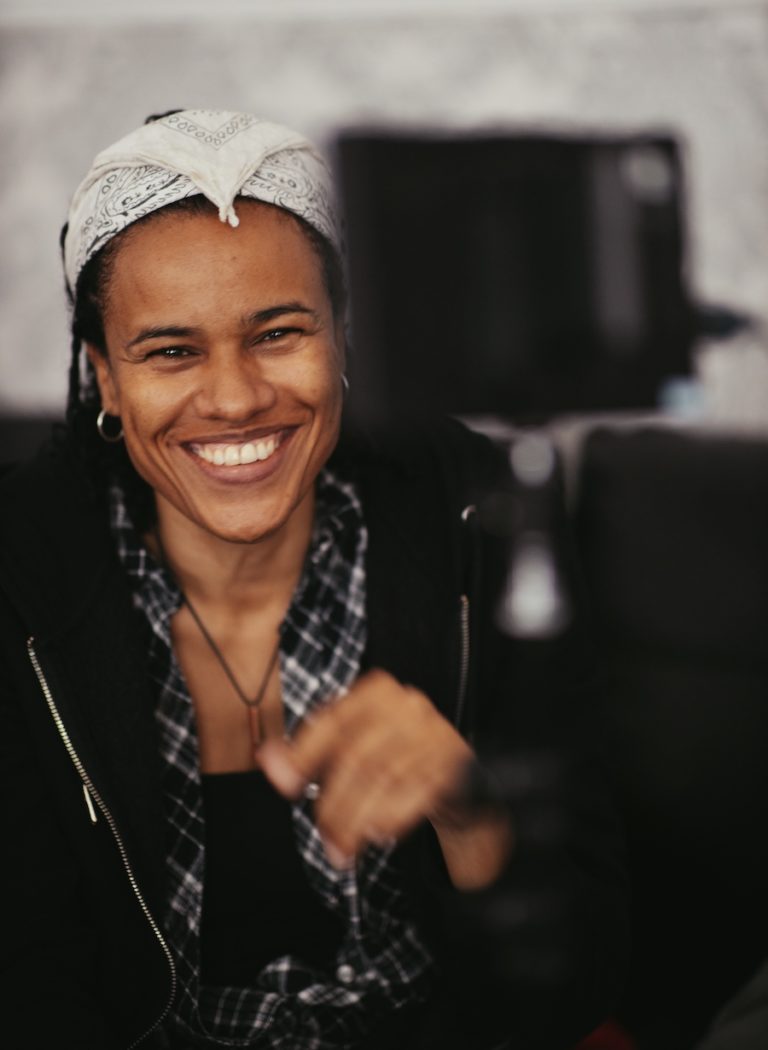 Processed with VSCO with ka1 preset

Jade Winters has smashed through the glass ceiling. First a best-selling author of LGBT+ fiction, she went on to fund her own production company Wicked Winters together with her partner. Jade Winters has produced several queer indie short films, one feature film and now has a second one in the making. All of this while navigating the film market as a gay black woman. During my personal work in the film industry, she’s a name I’ve come across quite often. It’s always refreshing to meet filmmakers who are raising the bar for inclusiveness and leaving their mark on the industry. I sat down with Jade (via Zoom) to chat about her journey into the film industry, her passionate queer fanbase, the difficulties she’s faced in gaining support from the industry and the shift from being a romance writer to a director of crime films.

Alessia: There’s obviously a significant shift in genre from your romance novels and short films [adapted from the novels] to your crime feature films. “What made you change gears so significantly?”
Jade: When I first started, the first book I got picked up by a publisher, they said they liked the writing but, because it wasn’t a romance, they didn’t know what category to put it in. That is actually One Four Three, the crime feature that I just made. But at the time I went away, quickly wrote a romance and sent it to them. They offered me a contract, though I eventually turned it down and chose to self publish.

Does it mean you like crime more than romance?
Yes! It’s more of a matter of writing to market. Crime books don’t sell as well as my standard romances. The feedback I constantly get from my readership is that they want queer romances. Quite a lot of them feel lonely and under-represented. There isn’t a lot of positive queer representation out there. So with romances, people tend to get upset if they don’t get happy endings. Whereas crime gives more leeway with the plot. But if it wasn’t for my readers, I wouldn’t be doing what I love. And honest feedback is one of the most precious things.

How did you manage to branch out from novel writing to filmmaking?
I’ve always wanted to work in films. When I first watched Grease, I decided I would write Grease 2. But scriptwriting is not nearly as financially sustainable as novel writing. My partner will kill me when I tell you this, but with the money we had, we were going to buy a house. But she loves me to death so, instead, we invested it in funding our production company [Wicked Winters] and our short films. This second feature is the first time we’re actually branching out for funding.

What’s something that you think British cinema is lacking?
Realism. Like what happens in French films, Korean films. I watch a lot of Korean films and the endings are so realistic. They let characters just play out without worrying about glossing over the ugliest details. That’s not life. My dad died and that was my first real experience of death. And you know, when you watch films, a character dies and everyone is fine two days later? That’s what I thought death was like. Ten years later, I’m still not over it. In this country and in Hollywood, we’ve got this thing about glossing over real, raw emotions.

When it comes to pre-production, all the way from casting to the hiring of crew, representation is a big problem. What is Wicked Winters doing differently to allow for better representation?
I don’t want my films to be about the characters’ sexuality. I want that to be a part of who they are, but not all they are. Some people may like it, some people may not. I want to make an inclusive entertaining story more than a political statement. Every script I write, I keep characters’ descriptions as vague as I can, and that’s something I’m always told off for. But I don’t know who I’m going to cast yet, so why should I describe what they look like? All my casting ads call for colour-blind open casting. Yet during the last one I put out, out of 2000 applications, only five were from ethnic minorities. I’m not just talking about black women, but Asian women and other women of colour too. I don’t know if it’s because it’s a gay film, but they don’t apply.

Maybe there’s some sort of internal bias because LGBT+ films are still so predominantly white?
I don’t want to get paranoid and pin it to that, but ethnic minorities don’t apply. I want to hire a casting director for this next feature so that I can get feedback on why that is happening. It must be happening to other companies. We need to find out why. I always offer standard industry rates, we pay for travel, we pay for rehearsals. So it’s not about the fee. Some casting agents find actors on the street. As a two-people company, we don’t yet have the resources to do that. But we want to.

Your new film is called One More Lie. What is it about?
So, the film’s main character is actually Ashley McCoy, a detective from one of my novels. She wasn’t a main element in the book series, but she is here. Sort of like a spin-off. She’s investigating the disappearance of a man but she starts an affair with the man’s wife. It’s a story about deception, why we lie and the consequences of lying.

And finally – what’s the goal for your production company ten years down the line?
My dream goal is to be able to read a crime book that I really love and have the power and resources to adapt it into a feature. Get other directors in and just go around to the festivals and drink lots of champagne!

Jade Winters’ novels and films are available on Amazon. One More Lie is currently crowdfunding.

Image courtesy of Wicked Winters.
Image description:
1. A close-up portrait of Jade Winters, smiling into the camera. The background is blurry, with black and grey as the predominant colours.