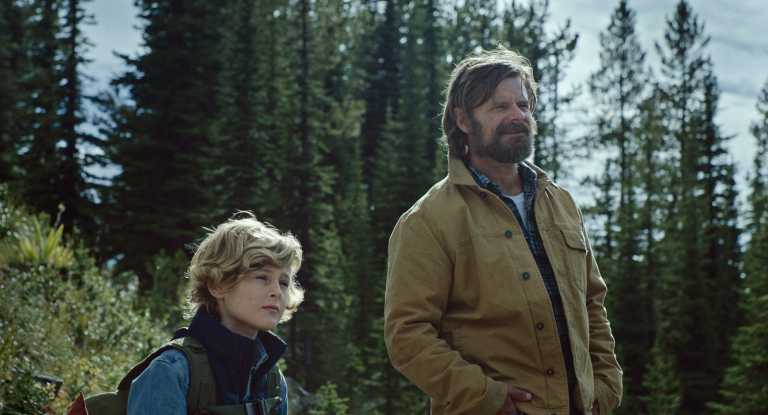 A cowboy and his young son set off for the mountains on a horse.

Everything that this sentence evokes, writer and director Anna Kerrigan seeks to dismantle with her revisionist Western Cowboys, one of the movies now playing as part of BFI Flare, London’s beloved LGBTIQ+ film festival.

Cowboys opens on a wide shot of the Montana mountains, immediately carrying us as far from Britain as possible, and promising to be an immersive experience that will make us forget we’re actually watching this on our laptop. With its grainy palette and set in a tiny American town that seems stuck in time, the film has an early 2000s feel to it. It tries hard to play out as something that we’ve seen before – until it’s not.

The film follows Troy (Steve Zahn) and his son Joe (Sasha Knight) as they secretly make their way to the Canadian border, passing through woods and camping wherever they find shelter. They’re on the run, we gather pretty early.

As the narrative cuts back and forth between them and Joe’s mother Sally (Jillian Bell), we understand this is officially “a kidnapping”, as Sally calls the police to report her child’s disappearance. The pin drops when she hands the Detective in charge (Ann Dowd) a photo of Joe in feminine clothes and with long blonde hair, a very different image from the young boy we’ve met at the start. Joe is trans and his mother refuses to acknowledge that.

“We’re outlaws,” Troy teases Joe, turning their questionable escape into a fairytale. We’re never told what exactly Troy is planning for when they get to Canada, except that people are “much nicer there”. The border becomes a symbol of freedom, not only for Joe, but for Troy too, who struggles with a mania diagnosis that, back in his hometown, caused him to be branded as “unstable” and serve time in jail.

It’s not the first time the aesthetic of Westerns is re-appropriated to ask some burning questions about masculinity and violence, with Brokeback Mountain probably being the most famous example. Similar elements are at play here: the pressure of conforming to a heteronormative worldview, the impact of religion and the focus on an isolated community, which shows how damaging a lack of education can be in terms of understanding gender, sexuality and mental health.

“I’m not a girl. It’s like the aliens abducted me and put me in the wrong body,” Joe says in his breathtaking coming out scene. The feeling behind the sentence is recognisable, but it’s staggering how the word trans is never uttered throughout the film. Sally dismisses this as Joe playing “tomboy”, but even Troy, who tries long and hard to understand and immediately switches to the right pronouns, lacks the vocabulary to describe his son’s identity properly. This becomes even scarier when we learn that Joe, whose age we assume to be between twelve and fourteen, claims to know how to fire a gun. “You know how to pull the trigger,” Troy reprimands him. “That’s different.” And yet it’s safe to assume that, within this community, a child learning to handle a gun is a far less shocking fact than a child choosing to wear clothes stereotypically assigned to a different gender. Consequently, we see Sally being upset at Joe for wanting to buy a toy gun not because it’s a gun, but because it’s a toy for boys. There is so much complexity in Joe, which Knight conveys with a clarity of mind that reminds us just how much self-searching and deconstruction trans and non-binary people go through from a very young age

The film doesn’t shy away from showing how damaging gender stereotypes can be, especially in childhood. Boys are constantly paired up with violence, girls with beauty and care. So it’s particularly cathartic to see a trans kid and a man with a history of mania reclaim the idea of cowboys for themselves, stripping it down of its toxic connotations and expanding it into a much larger call for freedom and connection. They’re outlaws from this ableist heteronormative society that refuses to see them for what they are.

There’s a particularly endearing flashback of Joe, pre coming out, looking over to his father and male friends playing bowling – the camera lingers on their bulky arms, stubble, beer bellies and flannel. These elements are far from what the male gaze has taught us to find attractive. To a certain extent, these white cis wannabe-cowboys could even be scary to me, as a woman, if I saw them in a different context. But, through Joe’s gaze, Kerrigan infuses them with tenderness and it’s this tenderness that the young boy carries with him as he figures out his masculinity.

It would be impossible to talk about Cowboys without praising the actors’ emotionally-resonant performances, especially from Sasha Knight. The child actor was only ten at the time the movie was shot, which, frankly speaking, blows my mind. Above all, his performance proves how valid the demands for casting transgender actors in transgender roles are. There is so much complexity in Joe, which Knight conveys with a clarity of mind that reminds us just how much self-searching and deconstruction trans and non-binary people go through from a very young age. To doubt these identities over our mindless faith in gender stereotypes is baffling to say the least.

By taking some of America’s most sacred tropes and reinventing them, Kerrigan uses a familiar language to teach audiences a new one, much less to do with violence and more with vulnerability.

Cowboys is now available to watch until March 28th via BFI Flare.

Images courtesy of BFI Flare.
Image description:
1. Joe, on the left, and Troy are standing against a backdrop of thick green forest. They look off into the distance.
2. The official artwork for this year’s BFI Flare: London LGBTIQ+ Film Festival. The creative explores the idea of navigating obstacles with resilience – as unique individuals and as a community. It depicts green, purple, yellow and blue corrugated lines and different-sized balls breaking through the pattern.
3. A reverse of the first image. Troy and Joe have their backs to camera and they stand in front of a majestic landscape view of the Montana mountains. The valley is green and the sky is covered in white clouds.