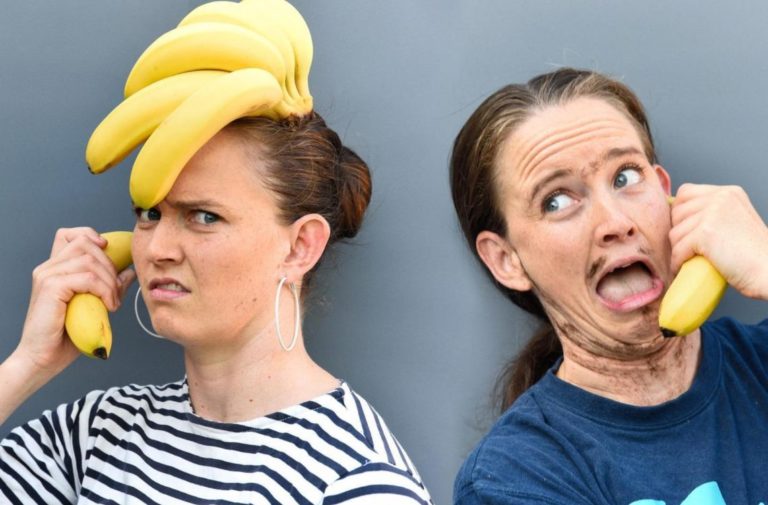 I hope you had a great August. The F-Word managed a fair bit of coverage of the Edinburgh Festival Fringe this year. We hope you found it useful if you were at the festival. Now we’re into September we’re getting into the swing of some autumn performances. If I’m missing your show, let me know in the comments.

Soho Theatre in London has a lot of interesting things coming up including some of the hits of this year’s Edinburgh Fringe such as Zoe Coombs Marr’s character Dave in Trigger Warning which runs until this Saturday, 10 September and RashDash in Two Man Show running until 1 October. I saw Zoe Coombs Marr last week and it’s a great show. Two Man Show has a captioned performance on Tuesday 27 September at 7pm.

Calm Down Dear, Camden People’s Theatre’s festival of feminist theatre, returns for a fourth year running from 22 September until 9 October. They’ll have 23 shows, talks and events over the three weeks, and this year for the first time the festival will transfer to the Bikeshed Theatre in Exeter too.

Of particular note this year is a one-on-one performance and exhibition running throughout the festival called PUBE from Eugenie Pastor. It’s a project about our relationship with pubic hair, and the politics and societal factors behind some women’s choice to remove their pubic hair. Audience members are invited to participate in a 45 minute one-on-one performance with Pastor, in which she creates a portrait of them using strands of their pubic hair – these then form part of a growing exhibition as she travels around the country with the show.

We gave Calm Down Dear a great review last year and this year looks to be as good or even better.

At Theatre N16 in Balham Torn Apart (Dissolution) from No Offence Theatre will run from 12 to 30 September (no Fridays or Saturdays). The play puts women centre stage and deals with issues such as feminism, immigration, male repression, fate, homosexuality and the most painful aspects of human conditioning. It got five star reviews when it was previously at N16 and at Brighton Fringe. Rachel Mars is going to be touring the UK with her show Our Carnal Hearts. With original music that draws on the US Southern gospel tradition of sacred harp singing, where four singers perform in a square formation creating a wall of sound, Our Carnal Hearts reveals what lurks in the dark, exposes the monsters within and without and joyfully embraces our rage at the situation our political landscape has left us in. It starts at the Royal Exchange in Manchester on 16 September before touring to Theatre Royal Margate, Shoreditch Town Hall, JW3, Camden People’s Theatre, Norwich Arts Centre, Cambridge Junction and The House, Plymouth before finishing up at Harlow Playhouse in March next year.

Following her run in Edinburgh, Fiona Sagar is going to be performing her solo character-comedy show exploring entitlement on 17 September at The Lion and Unicorn in London, part of Laugh or Cry’s Cruel Britannia (a week of comedy, satire and dark entertainments). From the self-obsessed millennial who thinks she’s starring in her own ‘Truman Show’, the charlatan princess who’s a master of all trades, the celebrity fundraising for fellow struggling millionaires, the everyday sexist bro, the career politician who endorses tax avoiders, to the frustrated matriarchal granny who doesn’t recognise the world she lives in anymore. Entitlement asks are we all a little too entitled?

A little further afield, in Dublin, Bez Kinte Theatre Company who have roots in the UK, Ireland and Serbia will be presenting Breaks, an exploration of feminism past and present, challenging conventional gender roles through a collage of theatre, costume, movement and voice. This is an original show devised by Erin Gilgen, Emma Hughes, Naomi Faughnan, Louisa Sanfey and company. Developed through the Open Lab Scheme at Barbican Guildhall, London, with support from Fringe Lab and Arts Council England. It will be performed at Smock Alley Boys School in Dublin from 11 to the 18 September.

Breaks is part of Tiger Dublin Fringe 2016 which also features Hot Brown Honey, my favourite show at this year’s Edinburgh Fringe. Go and see them both!

Lastly I saw Our Ladies of Perpetual Succour at the National Theatre a couple of weeks ago and it’s brilliant. Really well staged and acted, with an all-female team and believable three-dimensional characters. The only thing I didn’t like about it was closing with a Bob Marley song, which from a white cast felt like cultural appropriation. Tickets might be hard to come by, but it’s worth checking out if you can. It runs in rep until 1 October. There are captioned performances on Monday 12 September at 8pm and Wednesday 21 September at 8pm and audio-described performances on Friday 9 September, 5.30pm and Saturday 10 September, 5.30pm with a Touch Tour at 3pm.

Image 1 is of Zoe Coombs Marr by James Brown courtesy of Soho Theatre. It is a composite photo with Coombs Marr on both sides of the photograph, on the right she is being her male character Dave, with his hair in a ponytail and a fake beard. He is holding a banana in his left hand as it it is a telephone and is speaking into it. On the left hand side of the photograph Coombs Marr is herself as Zoe with her hair tied back. She is also holding a banana as if it is a telephone and has a bunch of bananas on her head. She looks unimpressed.

Image 2 is of Fiona Sagar in Entitled by Karla Gowlett. Sagar sits in front of ornate fleur-de-lis blue and gold wallpaper. She is wearing a dark pink dressing-gown and a tiara. She is holding a cup of tea. She sits sideways to the camera, looking into the lens with a small smile upon her face.