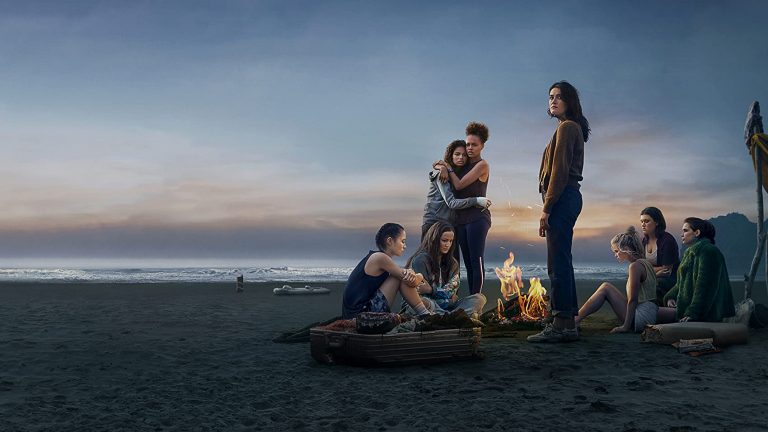 The Wilds is a brave new world

If you haven’t heard of The Wilds, you need to catch up before someone spoils it for you. The twist and turns of this sci-fi drama alone are worth the watch, but the real revelation is how it sets a new bar for feminism in mainstream genre television.

The Wilds is Amazon Prime’s latest release, created by first-time show-runner Sarah Streicher (whose only mainstream credit is as a staff writer for Daredevil). The show starts off on the same premise as the famous sci-fi phenomenon Lost, which is in turn inspired by William Golding’s novel Lord of the Flies.

A plane crashes. A group of survivors is stranded on an island. No help is coming. Something is clearly off. How do they survive? And what’s wrong with this island that doesn’t seem to be on any map?

Something immediately striking about The Wilds is that the survivors are all young women. This kind of ensemble cast is unfortunately still rare outside of romantic comedies (Bridesmaids) or films that are specifically marketed to women as an often superficial affirmation of #GirlPower (Ghostbusters, Ocean’s 8). The Wilds is surprisingly subtle about its casting choices, both in its synopsis and online marketing. That’s not because the choice isn’t important. On the contrary, having eight lead women in a genre-piece is groundbreaking. As soon as the pilot starts, it feels like new territory. The reasons behind the silence, I suspect, are effectively aimed at drawing in as large an audience as possible while avoiding cries for a hidden agenda.

Although the show manages not to be obvious about it, these women carry scars often caused by the men in their lives or, at the very least, by patriarchal expectations. The oppressors are not always framed as evil, but as simply exerting their power in a society that expects them to do so

What is also surprising is that the story utilises a flashback narrative. Each episode is dedicated to one of the eight girls as they recount their experience on the island from an interrogation room. On the writers’ part, it seems silly to tell us right off the bat that the main characters have been rescued. But actually, this format unsettles our expectations of the survival adventure genre. The story is not really about whether these girls will make it off the island. That doesn’t mean survival comes easy; the first episode ends with a ninth girl succumbing to interior wounds after seemingly surviving the crash. By playing with the claustrophobia of the interrogation room and the wide, eerie environment of the island, we’re never quite sure what might be lurking around the corner. We never feel safe.

Let me clear any doubt: this is definitely a show about feminism. In fact, it smashes you over the head with it in the best possible way. This is a show that digs deep at what it means to exist in a patriarchal society, the way the system generates trauma and the sacrifices that are required to overcome it. These young women have very little in common, both in terms of personality and socio-economic backgrounds. As we see them form bonds and through each of their individual stories, we explore different sides of oppression. Although the show manages not to be obvious about it, these women carry scars often caused by the men in their lives or, at the very least, by patriarchal expectations. The oppressors are not always framed as evil, but as simply exerting their power in a society that expects them to do so.

One of the most tender stories is that of Dot (Shannon Berry), who dedicates her teenage years to caring for her ill father. The absence of a mother figure means that, within the family unit, she unassumingly takes on the caregiving role despite being so young and inexperienced.

Issues that we’ve seen on TV before are explored under a more complex light. For example, Rachel (Reign Edwards) is a competitive diver struggling with anorexia and body dysmorphia after her coach informs her that her developing body is not suitable for the sport anymore. The show hints at the fact that racism is very much a part of competitive swimming and, as a black girl, Rachel is doomed to fail because the canonical requirements of the sport are shaped after minute white women.

Ecofeminism, specifically the intersection of vegetarianism and feminism, is explored through Martha (Jenna Clause), a vegetarian Native American survivor who has to decide whether to feed on meat while food runs low.

Leah (Sarah Pidgeon) offers one of the most accurate portrayals of deteriorating, untreated mental health that I remember witnessing. Leah’s depression and paranoia are triggered by an abusive relationship that she still romanticises. Over and over, she is told to “get over it” and her legitimate concerns are dismissed as a symptom of her unstable mental state. But by having the narrative ultimately side with her, we’re reminded of the never-ending struggle of women being condemned for their emotions, even by other women.

The show convincingly avoids the Mary Sue trope. Most of the girls aren’t skilled to survive on an empty island but they each bring what they can to the table, soon realising that their best chance lies in the ability to put their different expertise together. This defeats the masculine idea that physical strength is the most important trait for leadership and survival.

As the girls slowly learn to trust and lean on each other, finding a surprising freedom and autonomy within the confines of the island, the obvious question emerges: is this what a post-patriarchal world looks like? The community that’s built on the island is a matriarchal one, but those who run it carry within themselves and in their story the patriarchal schemes they’ve been raised with. This makes the characters and story both familiar and surprising.

The commitment to feminist storytelling starts from the crew, with women at the helm of most production areas. This allows the show to focus on the idea of female gaze and re-appropriating one’s story. Careful attention is given to whose story is being told and the best lens to view it through. For example, the episode about Fatin (Sophia Ali), a Pakistani-American cello player from California, is directed by Haifaa al-Mansour, who rose to the spotlight as the first Saudi woman filmmaker. Later on, the episode dedicated to Martha is helmed by trans Native-American director Sydney Freeland.

Subtly but inevitably, the show’s articulate and complex storytelling leaves us begging for more. Even those tropes that initially seem outdated or overused find new grounds to cover because new voices are narrating them. The show leaps off thanks to the power of inclusivity in a way that never feels gratuitous but rather earned, essential and a long-time coming.

The Wilds is available on Amazon Prime UK.

Images courtesy of IMDb.
Image description:
1. The eight main characters are huddled around a bonfire on the beach. A delicate orange hue in the sky indicates it might be twilight or early morning. From left to right Toni and Martha are sitting down, sisters Nora and Rachel stand hugging each other, Leah is in the middle looking towards the camera and finally Dot, Shelby and Fatin are sitting down on the opposite side of the bonfire.
2. All eight girls stand inside a dark cave, looking into the camera. They wear dirty but colourful clothes, in clear contrast to the wild environment.