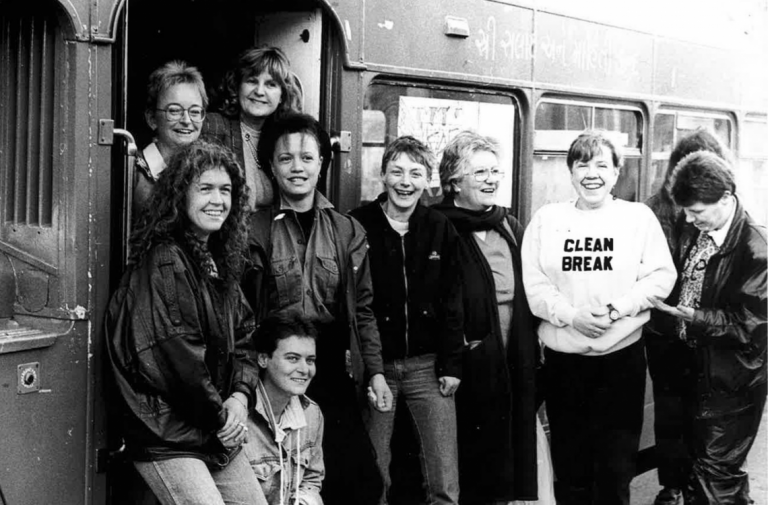 I have been The F-Word’s comedy editor for six years and also the theatre editor for five. It’s been amazing. I’ve had access to some of the most exciting feminist work in the UK, covered more and more of the Edinburgh Festival Fringe each year and had the opportunity to work with a committed and discerning reviewing team. I’ve learned so much. But it is now time to hand the multi-coloured spreadsheets on to the next feminist. Having started writing this blog series in April 2016, this is going to be my last edition. Thanks to all the theatre companies, comedians and PRs who’ve sent me interesting things, and you for reading it! See you in the cheap seats.

We are already into a new season of work at the Space in east London. Still to come is May’s edition of the New Moon Monologues new writing night from The Queens of Cups on Tuesday (live event tickets now sold out, but live-stream tickets available); one-woman show The Cloak of Visibility in the venue and livestreamed from 1 until 6 June; and Refuge from 22 until 26 June about women living in a refuge which looks to just be in the venue.

Sofie Hagen is previewing her show The Bumswing online tomorrow, and then going on a physical tour to venues including Brighton, Cambridge, Alnwick, Leeds, Sale, Glasgow, Colchester, Birmingham, Norwich and Bristol.

Brighton Fringe officially begins on 28 May though you will see some events happening sooner. Events are both live and digital, so check listings. As part of the festival, Funny Women will be hosting two live comedy nights on 18 June.

Rumah is presenting a night of new works from emerging and mid-career Asian diaspora artists in partnership with Omnibus Theatre. It’s on 31 May actually at the theatre in Clapham. Artists include Maryam Noorhimli and Camilla & Milla.

The theatre company Clean Break, which focuses on women’s experience of the criminal justice system, is celebrating four decades of work with its retrospective exhibition “I am a theatre”: 40 years of Clean Break Theatre Company. The exhibition is at Swiss Cottage gallery from 24 June until 31 July and includes archival material, an installation and a digital events programme. Calm Down, Dear, the feminist theatre festival, is back at Camden People’s Theatre in from 28 June until 16 July. Some shows to note are Lorna Meehan’s No Entry about vaginismus; iMelania presented by Varjack-Lowry which explores what it means to be foreign and female and Nasty: ‘big’ girls being gross, mean and sexy from Succulent Theatre, a work-in-progress on the experiences of two ‘big’ women. Check listings to see which shows are being presented live and which streamed.

And finally there are a lot of interesting shows coming up at Soho Theatre over the summer, including Fitter (which follows on from Hotter), Queens of Sheba, Ad Libido, Fatty Fat Fat, Sh!t Theatre’s Drinking Rum With Expats, Sindhu Vee, Catherine Bohart, Luisa Omielan, Mae Martin, Jessica Fostekew, Nina Conti and Desiree Burch – maybe I’ll just start camping out there now! Jessie Cave’s Sunrise will also be available for streaming from Thursday.

The feature image is a black and white photograph from Clean Break’s archive. It shows nine women mostly wearing jeans and leather or denim jackets standing outside a bus.