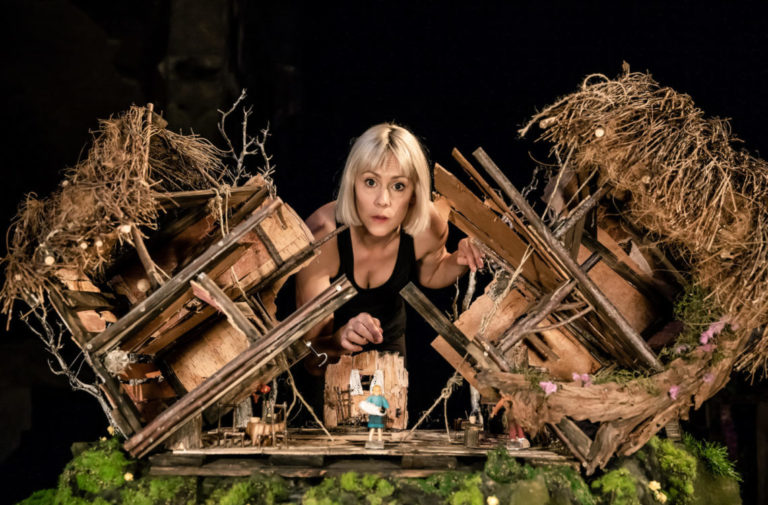 I'm a Phoenix, Bitch Production Photos ©The Other Richard

The 2019 Edinburgh Festival Fringe finishes today and this is our final set of reviews for this year. You can read the rest of our 2019 coverage in parts one, two, three, four, five, six, seven, eight and nine. Huge thanks to The F-Word’s reviewing team: Georgina Currie, Eleanor Dewar, Lissy Lovett, Tara Msiska, Olivia Phipps, Archanaa Seker and Emily Zinkin; F-Word editors Emily, Lissy, Lusana Taylor, Holly Combe, Ania Ostrowska and Sophie Whitehead for editing help; and of course all the performers, companies, venues, PRs and the Edinburgh Festival Fringe media office!

If you’ve ever wondered what people mean when they say a performer has put their ‘whole self’ into a show, then you need to see Bryony Kimmings’ I’m a Phoenix, Bitch. This is the epitome of female strength and fragility wrapped up in performance art.

This one-woman show tells the story of a mental breakdown Kimmings had in 2015, during which she nearly lost everything, including her newborn son. The set is beautifully crafted, with elements of childlike fantasy glimmering starkly beside the hard-edged props conveying the themes of depression and psychosis. A cottage – the setting of her breakdown – has been made in miniature near the front of the stage, and she shows us around its rooms using a small camera. By the end, she is literally scaling a mountain at the back of the stage; it’s a tremendous performance. Kimmings plays with perspective both physically and through her storytelling, using a male ‘inner demon’ monologue intermittently, highlighting her mental saboteur.

It’s an intense hour and a half of theatre, but that’s no bad thing. At times, Kimmings reminded me of Kate Bush, wailing and dancing, a force to be reckoned with. You won’t want to miss this. Raven is a circus show created by Still Hungry, an all-women collective from Berlin. The three artists, who perform contortion and on rope and straps, are also mothers and have drawn on their experiences of child rearing to make this show.

Discussions around how difficult it is to balance parenthood with a career or how someone keeps a strong sense of self once they have a child to look after are not new, but in Raven there is the added question of how well you will be able to do your physical skill once childbirth has changed your body or if it’s taking you a long time to get back in shape. The performers approach all these questions with humour and ingenuity. There are excellent moments of manipulation using dolls as stand-in babies and the performers’ tricks are all used well to comment on the themes of the show. Sometimes when circus artists speak live in shows, it feels stilted and this is avoided here by the use of voiceover which works really well.

Raven may not be breaking particularly new ground artistically, but it’s a warm and joyful look at the difficulties of parenthood specific to circus artists and I enjoy it a lot. E8 explores the lives of four people at a Pupil Referral Unit in East London: Polly (the headteacher), Mo (a fellow staff member), Ryan (a difficult but quiet student) and Bailey (an angry, betrayed Hackney youth). The last two are students who have been expelled from mainstream education because of bad behaviour.

Bailey (played by the electric Alice Vilanculo) is the real heart of the piece. She’s had a tough life and her future looks even tougher: she’s lost a world that doesn’t feel built for her. The staff members, being from different backgrounds, take very different approaches to her education: one relies on ‘tough love’ and the other on ‘compassion, with the freedom to make mistakes’. At times it’s difficult to watch these two approaches side by side; it reveals their pros and cons quite starkly. The audience feel Bailey’s claustrophobia and hopelessness acutely, though the message sometimes feels a little contrived. There are conversations between Mo and Polly that don’t quite sit right, especially some of Polly’s lines which feel shoehorned in especially for potential middle-class naysayers.

Despite this, there are moments of real joy and alignment in the piece, particularly when Ryan and Bailey perform an impromptu rap together. It feels real and raw, showing the heart of these kids: an important scene that allows the human side to shine through.

A sex-positive, queer-embracing storm of a performance that I think many people would run a million miles from doing themselves Heidi Regan is definitely one of those performers with whom you know she is already three or four steps ahead of the audience; she is so intelligent and thoughtful that it is impossible to predict what direction she’ll go in next.

Heidi Kills Time revolves around the theme of time travel, particularly the question: “If you could go back in time, would you kill Hitler as a baby?” There are some particularly brilliant observations here, with a touch of the absurd thrown in. There are also some quite lovely parts about whether she came out as gay too late in life, as well as the butterfly effect – would she have met her current partner had she come out earlier? It’s a tender exploration of time, regret and acceptance.

I don’t expect she’s everybody’s cup of tea (who is?). She is, as she herself claims, a “grower”. The gag rate isn’t the highest at the Fringe, but the writing is excellently crafted. There’s something unique and intensely likeable about Regan and she’s definitely one to keep an eye on. Claire Dowie’s When I Fall If I Fall (Theatre)
Finished 25 August, Summerhall
Reviewed by Lissy Lovett

There is always a lot of talk at the Edinburgh Festival Fringe about its lack of diversity. The financial constraints of performing there or even visiting are well known and the festival is overwhelmingly white. One of the areas that we perhaps don’t talk about enough is the lack of older voices; sometimes it feels like every single person at the festival is 27.

A welcome change from the homogeneity of the rest of the Fringe, Claire Dowie’s When I Fall If I Fall is a one-woman play about an older woman. Gloria used to be a dancer and tells the audience how she travelled all over the world. But now she watches TV at home and awaits her meals on wheels deliveries. Gloria lives with dementia and the repetitive nature of the script reflects the forgetfulness of that condition very well. However, this also leads to the writing being somewhat one-note and I wonder if more editing or a dramaturg could improve the arc of the play. Some of the scenes are underscored by music and a blurry and dark video of the can-can runs behind Dowie on a projector throughout.

Dowie gives a committed and often heart-breaking performance as Gloria and her final triumphant can-can demonstrates that everyone, no matter their age, has something to offer. A show at 11:30am that shares the naughtiest, filthiest letters of famous lovers through history? Surely it can’t be as bad as the stuff on the internet? Think again, my friend.

James Joyce was a filthy lover of all things bum-related, as he makes it very clear in one of many letters to his lover Nora Barnacle. Hilarious, ridiculous and at times very poetic, the stream of filth that Rachel Mars shares with us initially feels like just a bit of fun.

As the Your Sexts Are Shit: Older Better Letters progresses, however, Mars enlightens us about her own journey with sexual literature and frankly reveals a delicate, intimate side to her lifelong libido. A sex-positive, queer-embracing storm of a performance that I think many people would run a million miles from doing themselves. What starts as an apparently throwaway reading of some incredibly explicit historical pen pals soon grows into an exploration of the power of sex within a relationship, and the intense intimacy that it can create between two people. A section discussing the use of Mars’ hands as both everyday tools and sexual instigators was particularly mesmerising.

Mars is captivating to watch and throws herself wholeheartedly into what for many of us is a deeply sensitive topic. Music and PowerPoint slides accompany her speeches in what ends up being a very satisfying and thought-provoking hour.

Image 1, the feature image, is a production image from I’m a Phoenix, Bitch and is by The Other Richard. It shows performer Bryony Kimmings behind a big model of a cottage which is split down the middle. The two sides of the cottage are held in place by string tethering them and lean outwards. The cottage is made mostly out of wood with a thatched roof and a rural feel. A tiny model of Kimmings wearing a blue dress and holding a baby is in the centre of the house. The real life Kimmings has a blonde bob and looks directly at the camera.

Image 2 is from Raven and is by Daniel Porsdorf. It shows the three performers all curled up asleep stacked on top of each other on a sofa on stage. They’re wearing pyjamas and there is a rug on the floor in front of the sofa.

Image 3 is from E8 and is by Amy Walters. It shows a performer with a massive afro standing, facing to the left, looking down slightly and screaming. They are in front of a smudged purple background which has “E8” written on it in white.

Image 4 is from Heidi Regan: Heidi Kills Time and is by Steve Ullathorne. It shows Regan smiling at the camera. She has shoulder length mousey-blonde hair and wears a pale pink sweatshirt.

Image 5 is of When I Fall If I Fall and is by Kilowatt – Elisa Nocentini. It shows performer Claire Dowie on stage doing the can-can. She wears a black and red can-can outfit, a blonde curly wig and is smiling out at the audience with her skirt in her hands.

Image 6 is from Your Sexts Are Shit: Older Better Letters and is by Maurizio Martorana. Rachel Mars the performer is on the right of the image, with the left hand side of her face and body slightly cut off. She holds a microphone to her mouth and is speaking to the audience. Behind her projected on a blue background are the words (cut off slightly to the left): “wanna get underneath / the table and make it / hard for you to talk”. A wooden chair is just in shot on the lower left.