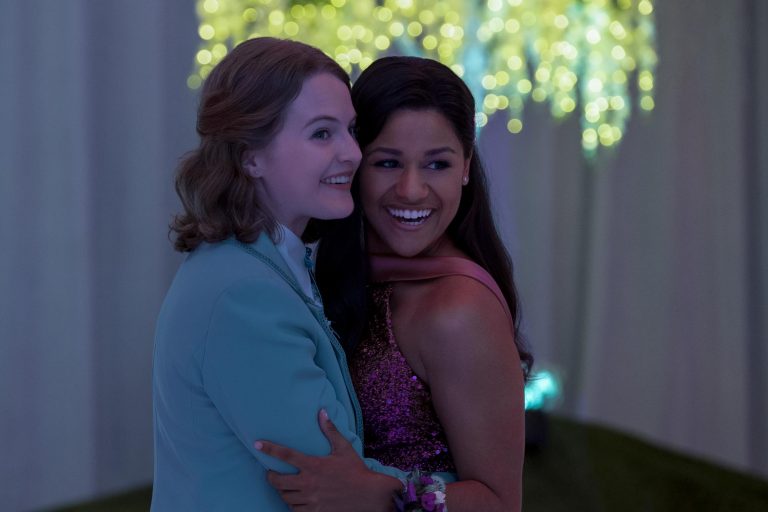 The Prom: too much and not enough

With film after film showing us lesbian characters dying, repressed, or dangerous, the concept of a film that shows two women happily in love with each other comes as a revelation. If there is one thing that could fight off the winter blues, my guess would certainly be for a lesbian-centred, glittery, cheesy dance musical. Enter The Prom, directed by Ryan Murphy, the man behind Glee, Pose and many other musical prodigies.

The Prom has a good-natured premise: high school student Emma Nolan (a first feature role for Jo Ellen Pellman) wants to go to prom with her girlfriend Alyssa (played by a criminally under-used Ariana DeBose). However, the PTA of Emma’s small-town Indiana school has decided that, in the face of equality legislation, they would rather cancel the prom for everyone than allow Emma to bring her date. Alyssa is also still closeted (and the daughter of the head of the PTA). While Emma takes up the role of outcast, Alyssa still has a lot to lose as the popular girl and can’t bring herself to openly stand up for an inclusive prom. Meanwhile, in New York, the two principal cast members of Eleanor! The Musical (James Corden and Meryl Streep) have just heard that their show is closing. They meet up with an out-of-work actor Terry (Andrew Rannells) and an eternal chorus girl Angie (Nicole Kidman) in a bar. They decide that in order to become relevant to the mainstream again, they need to take up a cause célèbre. They find a trending case of a young girl who has been denied a prom by her school because of her sexuality and they decide to head down to Indiana to campaign for an inclusive prom.

If it feels like these are descriptions of two entirely different films, then I have done my job in conveying what watching The Prom was like. The tone flip-flops from a lesbian coming-of-age drama to a flashy New-York-ducks-out-of-water road trip musical, à la Priscilla or To Wong Foo. Unfortunately, most of the time the film edges more towards the latter. We barely get any time to watch Emma and Alyssa’s relationship develop because at every turn we are interrupted by one of the Oscar and/or Tony-winning actors who need to be on screen to justify their pay check. One can’t help but wonder if this would have been different if the team writing, directing and producing weren’t so heavily male-dominated. Maybe it just seemed too inconceivable to them that an audience would actually be interested in the relational development of two teenage girls.

Straight people get a lot of cheesy, unrealistic, deus-ex-machina-wielding romantic comedies, why should we judge LGBT+ films any harder? On the other hand, reasoning this way feels in this case like a cop-out, especially with this amount of mainstream attention, with these stars attached, with this budget

A lot has already been said about James Corden’s turn playing a gay Broadway star, so I won’t say too much about it, aside from maybe that limp-wristing, high-pitched screaming and lisping your way through a performance is not a good look for a straight actor. What I have seen much less discussion of is a question that baffled me through the whole film: why do we need four washed-up actors as side characters? Why do we need to give them all their own special song to show how deep down they are virtuous and really do mean good? Why couldn’t they have condensed this down into two or maybe even one side-character?

To be fair to the film, it does make some funny and apt commentaries on the narcissistic performance of celebrity activism. However, its self-awareness is not enough to stop it from perpetuating the problems that it pretends to satirise. The established star cast completely outshines the main couple in terms of screen time, with very little narrative justification. There is no reason why Meryl Streep’s character should soak up all the limelight in a story that is… not really about her at all? And yes, fine, we get the point that it’s funny because this is exactly what her character is doing in the film, but in the end this joke never ends up actually paying off. The Broadway characters never take a backseat – in fact, we spend a lot more time exploring James Corden’s relationship with his homophobic parents and Meryl Streep’s newfound love with the moralistic school principal than we spend time exploring Emma and Alyssa’s life.

In fact, we learn mostly about Emma’s life through others, like the principal, her grandmother and the various Broadway stars talking about her. Similarly, Alyssa suffers from a severe lack of agency. The problems around her mother (an extraordinary Kerry Washington, whose performance is superb, even with the little moments she’s working with) and her perfectionism, her dad’s absence, the homophobia she overhears from her friends as a closeted girl – none of these are explored beyond a couple of lines of song. Given the talent that both actresses have, and given the fact that both actresses are openly queer, it seems a shame that we don’t get to experience much of their presence. The whole film feels like it is attempting to de-politicise and make palatable what is an inherently political issue. Emma’s insistence that she “just wants to go to prom with her girlfriend” rather than make a spectacle plays into a fake-acceptance of lesbian identity, where it’s fine and dandy to be gay, as long as you don’t show too much affection, you don’t make too much of a fuss and, most importantly, you are never ever angry or bitter at the people who cause you pain.

One can see why this choice was made – to those who are not into LGBT+ politics, harsh preaching about LGBT+ equality will be alienating, rather than convincing. However, the simplistic portrayal of homophobia and its effects on young LGBT+ people and the insistent centrism of the film and the compulsion to make everyone kind and accepting in the end just means that very serious topics are not actually dealt with. In fact, the portrayal of Christian residents of Indiana as uptight, hypocritical, and homophobic until a New York actor tells them to stop being mean doesn’t actually do that much to build bridges anyway, but it does mean that all characters (including Emma) feel hollowed out of any real-world resemblance to either the LGBT+ community or its detractors.

On one hand, I would love to appeal to a sense of equality – surely the only way that we know the LGBT+ community has come out of the shadows of marginalisation is when we get to have our own guilty pleasures. Straight people get a lot of cheesy, unrealistic, deus-ex-machina-wielding romantic comedies, why should we judge LGBT+ films any harder? On the other hand, reasoning this way feels in this case like a cop-out, especially with this amount of mainstream attention, with these stars attached, with this budget. The film runs over two hours, yet substance is sacrificed to style, leaving us with great set-ups of real-life problems that LGBT+ teens (and adults!) continue to face, without any time to actually explore these issues. The entire problem of religious homophobia is solved by Andrew Rannells singing a song about ‘loving thy neighbour’. If only it was so easy.

The Prom would have been revolutionary if it had come out ten years ago. Certainly there is a part of its appeal that still endures – again, there is a severe lack of happy, joyful lesbian stories, and The Prom has most definitely honed in on that gap in the market… Only to then marginalise its own central characters.

If I were writing for a ‘straight’ or apolitical website, I would probably defend this film with my entire life. There is immense power in showing young people that they can lead a happy life as LGBT+ people. Of that there is no question. However, as much as I don’t think this film should be judged more harshly than its straight counterparts, simply showing a happy lesbian couple does not a masterpiece make, especially when this couple keeps being upstaged by the supposedly comic-relief side characters. Among ourselves as feminists, I think we can acknowledge that lesbian narratives have moved on, and, as much as we deserve joy and happiness, we deserve depth as well.

The Prom is streaming on Netflix.

Images courtesy of Netflix.
Image description:
1. Main characters Emma and Alyssa embrace while looking off camera. They are smiling. They wear their prom outfits: Emma wears a pale blue tuxedo, while Alyssa is in a glittery purple gown.
2. The four Broadway stars are caught mid-dance in sparkling glitter outfits. From left to right, we have Trent, Dee Dee, Berry and Angie.
3. The film’s poster shows Emma and Alyssa holding hands with their back to camera. They wear their prom outfits. Their high school is visible in the background. The sun is setting, casting a purple hue over the scene. At the bottom, it reads The Prom.