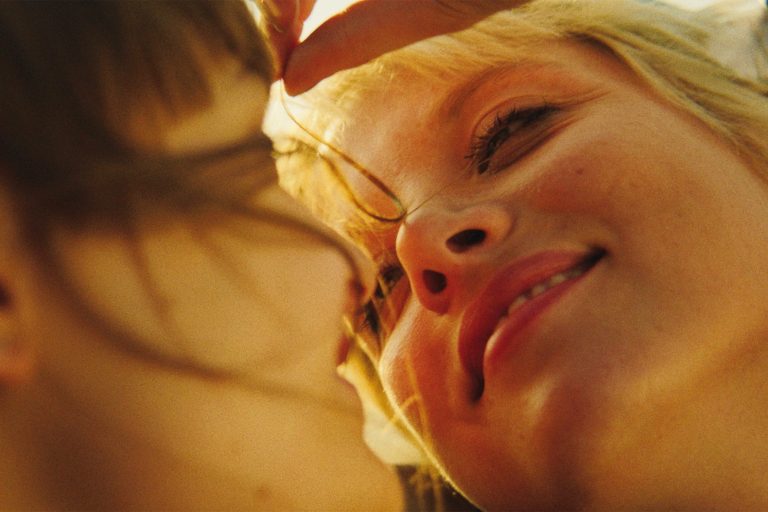 Cocoon: portrait of a slow transformation

“There are a lot of coming-of-age films that deal so much with discrimination and violence, and of course, that is a truth, sadly still, but I don’t feel like we can only tell those stories” (Leonie Krippendorff)

As we are all braving a third lockdown during the dark and cold winter, a film that starts out by telling us that it is set in Berlin’s summer of 2018, which was the hottest summer on record, feels like a slight mockery. Through shots of sunshine reflecting on the pavements, and people swimming in outdoor pools, Cocoon immerses us in a setting that is very far away from our current everyday.

Yet, within minutes of this introduction, the film’s charming protagonist Nora (played by Lena Urzendowsky) is likely to win over even the most cynical and envious of hearts. Nora is a timid teenager, who spends most of her days hanging about with her sister Jule (Lena Klenke) and her sister’s friends in Kreuzberg, Berlin. In the first ten minutes of the film, she says so little that one starts to wonder whether she can speak at all, but her fascination with the world around her quickly and wordlessly becomes clear, as we see Nora investigate the worlds of art, friendships, nature and growing up.

In conversation with director Leonie Krippendorff, she mentions that the film’s setting, in inner-city, poolside Berlin, was vital to capturing the essence of growing up.

“I grew up near Kottbusser Tor, which always felt like the centre of Berlin to me, and I used to go to the swimming pool there … Of course, I grew up without social media so I’m a totally different generation. So then I did a lot of research, and I spoke with a lot of teenagers, and we did a big street casting. So all the boys you see living either directly in the house where we shot or close by, they have been a huge corrector for the script to make it more accurate to the time where it’s set”.

“I was kind of curious if the heart of the emotions would stay the same for them, if they would have the same fears and the same wishes, and the same insecurities and stuff, and I figured out that this very much stays the same. It’s just a matter of how you deal with social media and the world around you, so it’s another generation, but there are points that are completely the same”. “I just remembered how physical puberty is, because you always have this awareness about your body, because it’s so new. Especially being in the outside pool, and being in the water, underwater, having water on your skin, letting the sun dry the water, it just really felt like this is how the characters inhabit these moments of being so physical”.

No singular incident seems to ‘fix’ the narrative (or indeed any of its characters) into a particular beginning and endpoint – the characters are consistently becoming and transforming, as the title of the film implies

There isn’t a single moment in which the narrative shifts and Nora starts to come out of her shell, or we see her ‘true’ self. Nora’s character becomes apparent across her journey through various significant and, seemingly, insignificant incidents: she has her first period and leaks blood through her jeans in front of her PE class. She becomes attracted to Romy (played by Jella Haase), the new girl in her school. Jule brings home a crying baby doll that she’s been asked to look after for a health class, knowing that their mother is barely able to look after her real-life daughters. During a house party someone shatters a jar, which is home to the caterpillars that Nora meticulously cares for.

Yet no singular incident seems to ‘fix’ the narrative (or indeed any of its characters) into a particular beginning and endpoint – the characters are consistently becoming and transforming, as the title of the film implies. The period incident could have easily been a setup for Nora being teased throughout the rest of the film, or her sister ignoring her out of shame – this doesn’t happen. Nora and Jule’s mother’s refusal to help out with the baby doll could have been the beginning of a complete relationship breakdown between a mother and her children – it is not. Nora’s rejection of a guy who tries to kiss her could have been a cheap and ham-fisted attempt at showing yet another ubiquitous scene of a man refusing to take a woman’s ‘no’ seriously – thankfully the scene doesn’t work out that way.

On the ambivalent natures of the characters, Krippendorff says: “No matter how well adults mean, they can’t understand how you feel. It doesn’t mean that they are bad, it just means that they are of a completely different generation. There is so much going on in Nora’s and her friends’ lives. They will never understand, so they do stay useless to a point”.

“Nora and her mother are pretty close, and she is open-minded. But she is also an alcoholic and she is simply not there, and for Nora she is not the person to speak about topics like getting your period, because she is so used to managing stuff by herself. Nora will just type a question into the internet and watch a tutorial. And then of course, you either get a tutorial of someone who is very sensitive with the topic, or you can get someone who gives you the wrong message. I think, because there is such a wide spectrum of what reaches young people with social media, and you don’t have control over it, you have to strengthen young people to be confronted with the wide views on important topics”.

“For example, the scene where Nora talks about her attraction to women to her sexual education teacher. The teacher tries to help, and tries to say the right thing, but she doesn’t really see Nora as a person”.

In the scene in question, the teacher tells Nora, “That’s okay if you love other girls, but you don’t have to define yourself, it could change next month”.

“And of course that’s a good thought as well,” Krippendorff concedes, “But for Nora it is important in that moment to say, ‘Well yeah maybe I am a lesbian, and that’s cool. That’s a thing that I can grow into and that I love to be'”.

“And this is what her friend who tries to kiss her does. He says nothing pedagogic at all, he just says ‘maybe you’re gay, cool’ and that’s so much more helpful for her. And, of course, you have expectations of that scene. From Nora’s perspective, it is incredibly scary to tell that boy how she feels, and that is why you can feel that danger in that scene, but then nothing happens and she does feel strengthened by having opened up. There are a lot of coming-of-age films that deal so much with discrimination and violence, and of course, that is a truth, sadly still, but I don’t feel like we can only tell those stories. We also have to encourage young people to see that this can also be a positive path to go down, and that doesn’t mean that you have to be confronted with a lot of pain, you don’t have to go through this incredibly difficult time. It will always be intense and it will always be difficult, but it can also be a very beautiful process”.

All characters affect each other and are affected by each other, but none of them are flat enough to be defined by any particular interaction. This is part of the pleasure of Cocoon – while all of the characters at some point or another do questionable things, none are wholly unlikeable or evil. Even when they make bad or frustrating decisions, we understand why these decisions are made.

The metaphor of the cocoon also works meta-textually, as the questions and issues that Nora grapples with are cyclical: a first period, an unstable home situation, young love. We have seen these problems before, and we will see them again in future coming-of-age films. None of these are ‘new’ problems in cinema, but they are new to Nora as a character, as well as every person going through puberty. By presenting them in a current-day context, we see how every generation deals with the same issues, just slightly differently. Growing up in the 21st century means being thrust into a world where information is so abundant that it is expected to be always already-known. Yet, sometimes, what we need is not the bare information, but a teacher

Krippendorff mentions that these cyclical narratives made it difficult for her to get the film made.

“The system works very much that you have to have this exciting elevator pitch, so you must have this great idea, and tell a story that nobody has seen before. So if I would say ‘I want to make a coming-of-age film of these two teenage girls falling in love with each other in Berlin, everyone would be like ‘…and what?’”

“So I needed to explain that the way I was going to do it, was different from other films, and it was worth telling the story another time in the way that I wanted to tell it. And also, personally, as a filmmaker, I might be very moved by Nora’s story even if it is not the most unique story you ever heard because it is so related to my experiences and my life. And I then think, if it touches me, then maybe it touches other people as well. Not everyone is in the cinema to be told stories that they’ve never seen before, it is also a reflection of life, and a reflection on emotional states you have been in, and memories and stuff”.

This cycle is most clearly evident in the scene where Nora looks at some YouTube videos about menstrual products in the bedroom she and Jule share, the evening after the aforementioned leakage incident at school. In lieu of an apology for not defending her little sister against the mockery of her classmates, Jule simply says that “I thought you started ages ago, you late bloomer”. Growing up in the 21st century means being thrust into a world where information is so abundant that it is expected to be always already-known. Yet, sometimes, what we need is not the bare information, but a teacher. This becomes clear after Nora bleeds on her bedsheets, despite having watched the available YouTube videos.

With its urban working-class setting and extended visual focus on the small space that insects carve out for themselves in human lives, Cocoon feels like a cautiously optimistic take on an Andrea Arnold narrative. The young actors portray the nuance of their characters amazingly, and the film manages to touch upon a host of relevant issues without ever becoming preachy. As far as lockdown viewing goes, this has been a surprisingly soothing and uplifting watch, guaranteed to chase away the winter blues.

Cocoon is available to watch via Peccadillo Pictures.

Images courtesy of Berlinale.
Image description:
1. The poster for the film shows an intimate close-up of Nora and her girlfriend. They smile at each other and appear to be laying down. They are illuminated by bright sunlight.
2. Nora sits on the top of a rooftop with her sister and friend. It appears to be summer, judging from their light clothes and the sunny atmosphere. The city of Berlin can be seen in the background.
3. Nora and her girlfriend stand smiling in a green field. They look off into the distance, off camera.