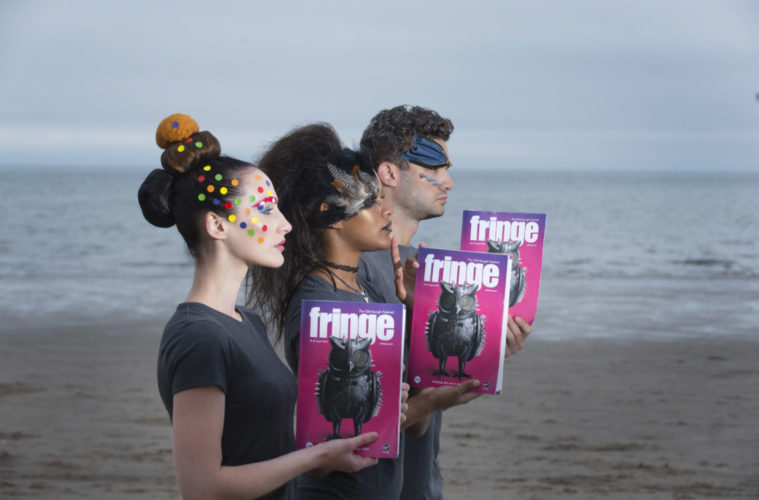 The Edinburgh Festival Fringe starts in just under a week. The F-Word will be there with our reviewing team of Rosy Candlin, Rachel Cunningham, Flora Herberich, Lauren Hossack, Lissy Lovett and Megan Stodel, bringing you as much feminist-related comedy and theatre news as we can.

In the meantime, here are some of the shows and performers that The F-Word has previously reviewed, which might give you some ideas for acts to see if you’re visiting the Fringe this year. (Please note, not all shows are playing all dates, so do check the listings too.)

Bridget Christie: Mortal (Comedy) 5 – 29 August, 11:00, The Stand Comedy Club. We’ve reviewed Christie’s shows A Bic for Her (twice) and A Book For Her as well as her book.

Are you going up to the Fringe? Let us know if you’ve got any tips for great feminist comedy and theatre in the comments.

The photograph is © Edinburgh Festival Fringe Society. It shows three people standing on a windswept beach, all looking to the right of the photo and holding a copy of the Edinburgh Fringe Festival Programme so it can be seen by the camera. They are wearing grey t-shirts and each one has an elaborate face decoration on the right hand side of their face. The woman in front has multicoloured polka dots across her cheek, forehead and hair. The woman in the middle has bird feathers around her right eye. The man at the back has three small spikes stuck to his right cheek and a piece of blue cloth across his right eye. The Fringe programme itself has a pink cover with the word “fringe” in white and a photograph of an owl in a full leather and spikes outfit on the front.